Our August pick for the PBS NewsHour-New York Times book club, “Now Read This,” is Maxine Hong Kingston’s 1976 memoir “The Woman Warrior,” which was chosen for us by author Celeste Ng. Become a member of the book club by joining our Facebook group, or by signing up to our newsletter. Learn more about the book club here.

Early on in her 1976 memoir, “The Woman Warrior,” about growing up Chinese-American, Maxine Hong Kingston writes that it is hard to separate what things in her are unique to her childhood from what is truly Chinese:

“Chinese-Americans, when you try to understand what things in you are Chinese, how do you separate what is peculiar to childhood, to poverty, insanities, one family, your mother who marked your growing with stories, from what is Chinese? What is Chinese tradition and what is the movies?”

Author Celeste Ng, who chose “The Woman Warrior” for this month’s book club pick, says this passage deeply resonated with her. 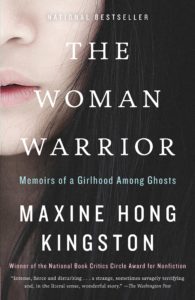 “Growing up Chinese-American, I was never sure which things were ‘real’ American or ‘real’ Chinese —as if there are clear-cut boundaries—or if they were simply my parents idiosyncrasies,” Ng writes. “I’m still not sure.”

As a result, Kingston doesn’t try to depict clear boundaries in “The Woman Warrior,” instead blending Chinese folktale with her mother’s family stories and her own memories to tell the complicated story of her identity.

Below, read more of Ng’s reading of “The Woman Warrior” by clicking on the yellow highlights.

From “The Woman Warrior”

The emigrants confused the gods by diverting their curses, misleading them with crooked streets and false names. They must try to confuse their offspring as well, who, I suppose, threaten them in similar ways—always trying to get things straight, always trying to name the unspeakable. The Chinese I know hide their names; sojourners take new names when their lives change and guard their real names with silence.

Chinese-Americans, when you try to understand what things in you are Chinese, how do you separate what is peculiar to childhood, to poverty, insanities, one family, your mother who marked your growing with stories, from what is Chinese? What is Chinese tradition and what is the movies?

If I want to learn what clothes my aunt wore, whether flashy or ordinary, I would have to begin, “Remember Father’s drowned-in-the-well sister?” I cannot ask that. My mother has told me once and for all the useful parts. She will add nothing unless powered by Necessity, a riverbank that guides her life. She plants vegetable gardens rather than lawns; she carries the odd-shaped tomatoes home from the fields and eats food left for the gods.

Whenever we did frivolous things, we used up energy; we flew high kites. We children came up off the ground over the melting cones our parents brought home from work and the American movie on New Year’s Day—Oh, You Beautiful Doll with Betty Grable one year, and She Wore a Yellow Ribbon with John Wayne another year. After the one carnival ride each, we paid in guilt; our tired father counted his change on the way home.

Adultery is extravagance. Could people who hatch their own chicks and eat the embryos and the heads for delicacies and boil the feet in vinegar for party food, leaving only the gravel, eating even the gizzard lining—could such people engender a prodigal aunt? To be a woman, to have a daughter in starvation time was a waste enough. My aunt could not have been the lone romantic who gave everything up for sex. Women in the old China did not choose. Some man had commanded her to lie with him and be his secret evil. I wonder whether he masked himself when he joined the raid on her family.

This excerpt is taken from Page 5 and 6 in the Vintage International edition. Page numbers from editions may vary.