Our September pick for the PBS NewsHour-New York Times book club, “Now Read This” is Sally Rooney’s novel “Conversations with Friends.” Become a member of the book club by joining our Facebook group, or by signing up to our newsletter. Learn more about the book club here. 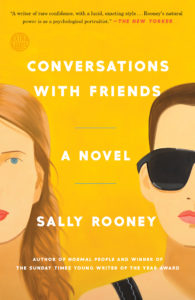 Irish writer Sally Rooney says forcing a writing day almost never works. The Booker Prize-nominated author says that either she wakes up and has an initial idea, which she runs with until bedtime, or she doesn’t, and it’s best to turn her attention elsewhere.

“Conversations with Friends,” her debut novel and this month’s book club pick, began as an idea of four central characters: 21-year-old Frances, her best friend and ex-girlfriend Bobbi, and an older couple with whom they become entangled. The idea then became a short story, and then one of the biggest books of the last few years. Rooney says she only knew the novel was over once she wrote its final scene.

Below, read more writing advice from Rooney, about why she doesn’t think everybody needs to read, and listen to the album that’s on her mind right now.

It varies. If the work is going well, I’ll usually lie in bed for a while in the morning, thinking about what I might write that day. Then after I get up, I work on and off until I go to bed. If the writing isn’t going so well, I do other things, or else I try to force myself to continue writing anyway, which never works. It’s all about the initial idea for me. If it’s there, I’ll almost always have a good day. And if it’s not, it doesn’t matter how hard I try, nothing of value will happen. I have to humble myself before the initial idea. When a week goes by without one, I feel very humble indeed.

“It’s easy to slip into believing that reading is extremely important for everyone…. But lots of human life goes on outside books.”

I’m not sure that I think everyone should read, necessarily. I think everyone should have the time and resources to read if that’s what they like to do, of course, and as we are far away from that ideal, that’s probably the most significant thing. But I don’t think there’s anything wrong with not being interested in books. As a writer it’s easy to slip into believing that reading is extremely important for everyone. Naturally it’s a big part of my life, but lots of human life goes on outside books, without reference to books, and that’s interesting and worthwhile too.

I find it hard to credit myself with discovering overlooked treasures. I generally come to things quite slowly, after much encouragement. I have recently been enjoying the Mountain Man album “Magic Ship,” but I’m sure a lot of other people have too.

The very brilliant short story writer Thomas Morris is the source of most of my good writing advice. For example, I often find it hard to know where scenes should begin and end, and I rely too much on characters entering or exiting rooms, or (worse still!) falling asleep. Tom advised me once to think of a story I’m writing as if it’s an anecdote I’m telling to a friend, and I still use that tip frequently when I’m trying to figure out the shape of a scene.

“Conversations with Friends” began life as a short story, so it’s very hard for me to pinpoint the moment at which I realized it was becoming a book. But as soon as I had the initial idea, which arrived in the form of my four central characters, I knew I wanted to pursue it as far as I could. And I realized it was over, strangely enough, when I wrote the final scene. I had written several other endings for the book, which were much longer, because I seemed to believe at some unconscious level that it was my task to “tie up” every ambiguity I had introduced. Once I identified that impulse, and reasoned myself out of it, I wrote the final scene as it is now – and I felt the novel was finished.