Write ‘what is absolutely true in your eyes,’ says best-selling author Robert Kaplan 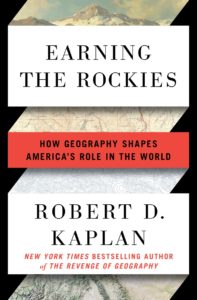 Our September pick for the PBS NewsHour-New York Times book club, “Now Read This,” is “Earning the Rockies” by Robert D. Kaplan. Become a member of the book club by joining our Facebook group, or by signing up to our newsletter. Learn more about the book club here and see all the previous book club selections here.

In his three-decade career, best-selling author and analyst Robert Kaplan has reported from nearly every region of the world and authored 18 books on foreign affairs and travel. His most recent, “Earning the Rockies,” includes not only political analysis and history but also veers into the territory of road-trip story, as he follows in his truck-driver father’s footsteps on a cross-country drive to see how America’s geography has shaped its past, present and will shape its future.

Below, Kaplan shares his daily writing routine (get up early), the best writer’s advice he’s ever received (write what’s “true”), and the overlooked books he thinks are important to read now (another book that studies “place” in America). In his words:

I get up at 5 a.m. daily and am at my desk at 6:30. I write straight till 10 a.m. with the computer Wifi disabled. I use my computer like an Olivetti typewriter, on which I wrote my first book 30 years ago. By 10 a.m. the world intrudes with emails on my iPhone and current events to catch up on. Then I continue to write, much less efficiently, till noon. After lunch and a nap I am back at writing. I write on planes and in airport lounges. I never watch movies. I read and write.

I’ll never forget the experience of reading a young adult version of “The Travels of Marco Polo” in the library of my public school when I was 11, in the fall of 1963. It helped forge my desire to travel.

“To avoid tragedy you have to think tragically.”

Everyone should read “The Federalist Papers” by Alexander Hamilton, James Madison and John Jay. It is a foundational text of what it means to be an American. Here is the realism, both constructive and tragic, on which American optimism was built. By always considering the worst in advance, as the Founders did, the worst would usually not happen. To avoid tragedy you have to think tragically.

William Least Heat-Moon’s “PrairyErth,” is a long, Proustian study of one county in Kansas, published in 1991: a deep vertical dive into one specific place. It was a counterpoint to his more famous, “Blue Highways,” which was a horizontal study of the whole United States. But “PrairyErth” is every bit as great.

In Henry Kissinger’s first book, written as a young man, “A World Restored,” he mentions that Metternich “judged actions by their ‘truth,’ not by their success.” It seems to me that this is a good writer’s motto. You should write what deeply matters to you, what is absolutely true in your eyes — how many copies the book sells is secondary.

There was no single moment when I had an epiphany. But it all started with Bernard DeVoto.

Originally, I wanted to write about Bernard DeVoto, one of my literary heroes who had been forgotten. But to write about DeVoto’s vision of America brought me back to the travels of my father around the United States in the 1930s. And when I put DeVoto together with my father, I knew I had to make my own journey across America. The geographical wonders of that journey inspired me to write about America’s place in the world in the early 21st century. The result: In this book, a travelogue is followed by a geopolitical analysis. Only after I did that, did I know that the book was completed. In other words, this was a small book, nevertheless, conceived gradually in stages. There was no single moment when I had an epiphany. But it all started with Bernard DeVoto.