For readers young and old, YA is A-OK

YA is a booming business.

Young adult fiction is one of the largest categories of book sales for the publishing industry today, and people have begun to take notice. Numerous authors whose credits are titles marketed for adults are trying to capitalize on this voracious market by adapting their own work for a younger segment of readers, The New York Times reported.

While the book genre targets an intended audience aged 12 to 18, the largest segment — nearly 43 percent — of buyers of YA books is readers ages 18 to 29. 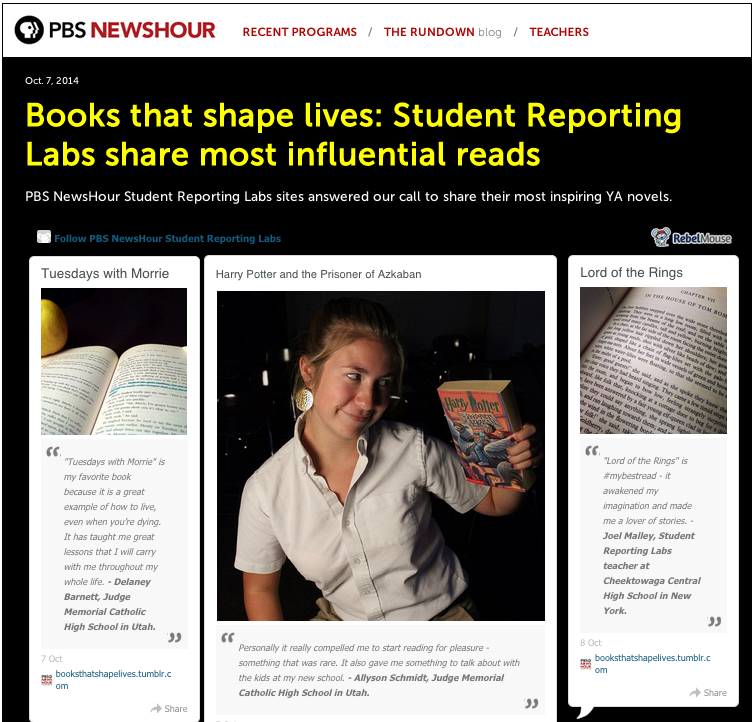 In a recent Student Reporting Labs post, young adults from around the country shared the most influential novels they’ve read.

While YA abbreviation seems to be a buzzy one today, it’s not exactly new. One of the earliest books written for a teenage audience was “Seventeenth Summer” by Maureen Daly, published in 1942. Some more popular YA titles have appeared on the shelves over the years include S.E. Hinton’s “The Outsiders,” and numerous titles by authors Judy Blume and Lois Duncan, among others.

In a recent appearance on PBS NewsHour Weekend, author Lois Lowry said that books targeted toward teenagers can have lasting effects just as they did on her.

“The book and character for me was Jody in ‘The Yearling,’ and I’ve said that for many years,” Lowry said. “It was a book that had a profound impact on me when I was about 8, and it was the first book I had ever experienced, though I was a voracious reader even at that young age, that had had such a profound emotional impact on me, that dealt with real characters who suffered.”

Left: A girl picks out a book at the Scholastic store in New York City. Credit: NewsHour