3 ways Trump disagrees with Fed chair Powell on the economy

Federal Reserve Chair Jerome Powell’s two days of testimony on Capitol Hill put on full display the many ways he and President Donald Trump disagree about the state of the U.S. economy.

From trade tensions to the unemployment rate, Powell’s comments to lawmakers in the House Financial Services Committee on Wednesday and the Senate Banking Committee on Thursday stood in contrast to the statements Trump has repeatedly made on Twitter, at rallies and to reporters.

Here’s a closer look at three specific issues on which Trump and Powell disagree.

Powell pleased investors Wednesday when he signaled the Federal Reserve might cut interest rates in the near future, something Trump has also called for in recent months. But Trump and Powell disagree about why those cuts might be needed.

In his testimony, Powell pointed to a slowdown in global growth and U.S. trade tensions — with China and key U.S. allies such as the European Union — as reasons why the Fed’s view of the economy has turned more pessimistic in recent months.

Powell cautioned that his statements should not be construed as criticism of the president’s policies, but he indicated the trade disputes Trump has started with other nations are significant drags on U.S. business investment.

“Apparent progress on trade turned to greater uncertainty, and our contacts in business and agriculture report heightened concerns over trade developments,” Powell said in his opening statement Wednesday.

Powell largely avoided mentioning Trump by name, but his message was clear.

“Uncertainty is a synonym for ‘Trump is unsettling the business community,’ and the Fed never sees uncertainty as its friend,” said David Wessel, a senior economic fellow at the Washington-based Brookings Institution.

READ MORE: Who will pay for Trump’s tariff hike?

On Thursday, Powell said tariffs have also had a negative effect on home building, which can hurt housing affordability in the long-term.

U.S. and Chinese representatives have continued negotiations on a deal to end the trade war, but no meaningful agreements to reduce tariffs have been announced.

Trump takes a very different view of his trade policies. He has said the tariffs he has put into place, especially against China, have boosted the economy.

Even if Powell disagrees with the president on tariffs, he appears poised to counter their negative effects by adjusting monetary policy. But that might not help years down the road. Cutting interest rates is a way to help boost demand in the short-term, said Stan Veuger, a scholar with the American Enterprise Institute, a Washington-based think tank.

For Trump, who is seeking reelection next year, a drop in interest rates might be enough to keep the economy afloat through 2020, but the longer-term consequences are less clear.

“The Fed is basically incentivizing these damaging trade policies by assuming they are temporary,” Veuge said.

Trump has often pointed to the historically low unemployment rate for black and Hispanic Americans as a sign of how his economic policies have benefited all Americans.

Black and Hispanic Americans have seen significant job gains under Trump, but the gains began during the Obama administration.

In June, the national unemployment rate for black Americans was 6 percent and the rate for Hispanic Amerians was 4.3 percent. Both numbers are near record-lows. 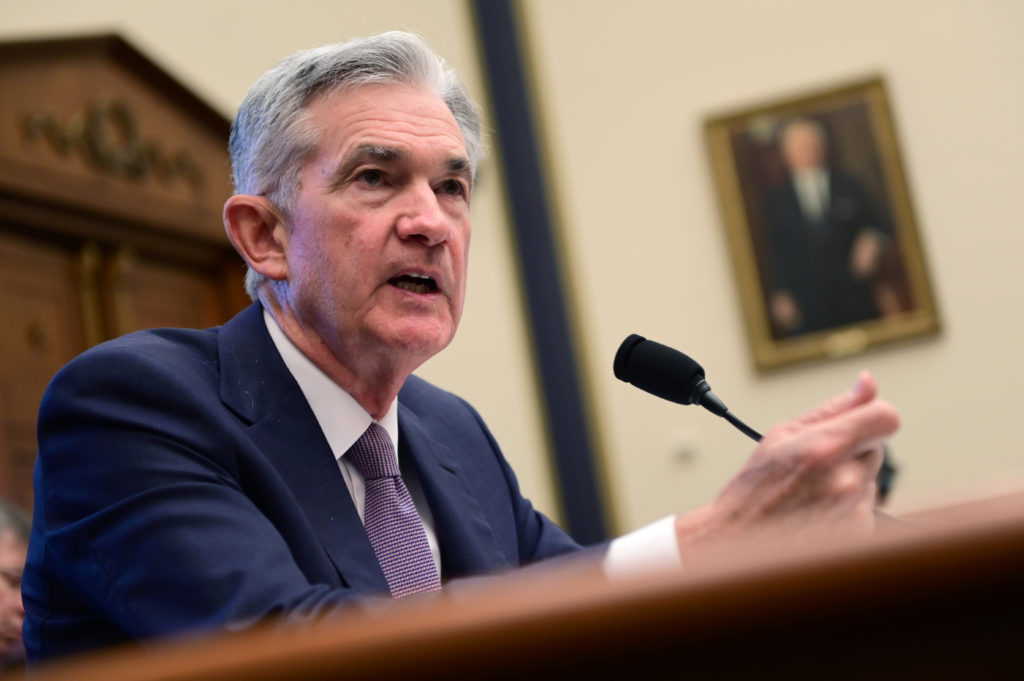 Federal Reserve Chairman Jerome Powell testifies during a House Financial Services Committee hearing on “Monetary Policy and the State of the Economy” in Washington, on July 10, 2019. Photo by Erin Scott/Reuters

As Powell pointed out in his testimony Wednesday, the black and Hispanic rates are still relatively high compared to other demographic groups — a cause for concern.

The unemployment rate for all Amerians was 3.7 percent in June. It was 3.3 percent for white Americans and 2.1 percent for Asian Americans.

“The benefits of a strong job market have been more widely shared in recent years,” Powell said. “Indeed, wage gains have been higher for lower-skilled workers. That said, individuals in some demographic groups and in some parts of the country continue to face challenges.”

Powell also mentioned that people in urban areas are doing better financially than those in rural areas. Notably, rural voters were key to Trump’s 2016 election victory, supporting him over Hillary Clinton by a 45-percent margin in the most rural areas.

The Federal Reserve plays a minimal role in addressing economic inequality, so any efforts to make a real dent in the disparity would fall to the White House, which, so far, has relied largely on the idea that a stronger economy benefits all Americans, including minorities.

Returning to the gold standard

In 2016, Trump advocated for returning to the gold standard — linking the value of the dollar to the price of gold. The U.S. moved away from the gold standard during the Great Depression, because the financial crisis caused too many people to hoard gold making it difficult to exchange dollars for gold.

It is unclear whether Trump himself supports returning to the gold standard now, but last month, Trump nominated Judy Shelton, a supporter of the gold standard, to the Federal Reserve Board.

Powell, who emphasized that his comments were not directed at the Fed nominee, said Wednesday that if the U.S. tied the dollar to the price of gold it would shift the Federal Reserve’s mission and force it to largely disregard other important economic factors such as the unemployment rate.

“I don’t think that is something that would be attractive. No other country uses” the gold standard, Powell said.

Why Trump and Powell’s disagreements matter

Past presidents have disagreed at times with their Fed chairs, and don’t often shift their economic plans based on what the Fed is saying.

In fact, Powell emphasized in his testimony that it is his job to respond to how the economy is affected by the president’s policies. It is not his job to influence the White House.

Trump’s views stand in greater contrast with Powell because the president does not take his advice from mainstream economists.

But past presidents have at least generally agreed with the Fed on major economic principles.

Trump’s views stand in greater contrast with Powell because the president does not take his advice from mainstream economists and often intentionally creates chaos as a negotiating tactic, Wessel said.

That makes Powell’s job more difficult as he tries to counter the negative effects that unpredictability injects into the economy.

Despite Powell’s disagreements with Trump, Republicans and Democrats alike appeared to back Powell during the hearings, complimenting him on his leadership and on maintaining his independence from political influences.

“To the extent that Congress is bowing to Jay Powell or endorsing him, it gives him more stature in case something goes wrong,” Wessel said.

Left: President Donald Trump gestures with Jerome Powell, his nominee to become chairman of the U.S. Federal Reserve at the White House in Washington, on November 2, 2017. Photo by Carlos Barria/Reuters

This Kansas program links a company’s past to its future