Who pays for Trump’s tariffs on China?

The Trump administration’s plan to impose a 10 percent tariff on another $300 billion worth of Chinese imports to the U.S. next month will likely hurt not only China’s economy but American consumers and businesses, too.

Multiple studies show the tariffs the U.S. imposed last year on $250 billion worth of Chinese goods, plus the retaliatory tariffs China has put on $101 billion worth of U.S. goods, have led to price increases, reduced the availability of some products and forced businesses to seek alternative suppliers.

Earlier this year the U.S. raised existing tariffs on goods ranging from seafood to handbags from 10 percent to 25 percent, when trade negotiations between China and the U.S. broke down. Now it plans to tax nearly all other Chinese goods that so far have been excluded from tariffs — namely clothing, shoes, toys and consumer electronics — beginning Sept. 1.

“There will be no free trade between the U.S. and China if this happens.”

“There will be no free trade between the U.S. and China if this happens,” said Yang Liang, an assistant professor of economics at San Diego State University.

The tariff could include Android phones and iPhones, which have so far been exempt from tariffs. The Trump administration plans to issue a final list in the coming days.

The idea behind the tariffs: leverage more pressure on China to agree to a deal that the two countries have been negotiating for months. Speaking to reporters Thursday, President Donald Trump erroneously said China would pay for the tariffs, not U.S. consumers.

“It’s been proven that our people are not paying for those tariffs,” he said.

In fact, American companies are the ones that pay for the tariffs and much of that cost is passed on to American consumers. And any retaliatory tariffs China imposes could have larger ripple effects throughout the U.S. and the global economy.

At the same time, the tariffs have been squeezing China’s economy in recent months.

Tariffs are import taxes that are paid by the company purchasing the product. That tax can be offset if Chinese firms reduce the price of their products to stay competitive. That would make Chinese companies less profitable, hurt the Chinese economy and, the White House hopes, make China more willing to strike a deal with the U.S. in exchange for the tariffs being lifted.

When Chinese companies do not lower prices, U.S. retailers have three options: absorb the cost of the tax, pass it along to consumers, or search for an alternative supplier from a country other than China. At the beginning of the trade war, companies had little choice but to absorb the costs or pass them along to their customers because international orders are placed months in advance, making it difficult to renegotiate prices.

The National Bureau of Economic Research study found that, in 2018, 100 percent of the cost of the tariffs were passed onto consumers.

Early on, many businesses were waiting to see if the trade dispute was resolved before they make any major adjustments to their supply chains, said Oleg Itskhoki, an economics and international affairs professor at Princeton University.

As the trade war continues, more companies are moving away from Chinese suppliers. Apple is reportedly considering shifting some of its operations to Vietnam and India. But that does not necessarily mean lower costs for U.S. consumers.

It is not cheap to find new suppliers. Plus domestic producers, as well as those from other countries, often raise their prices when tariffs are in place because they know customers have few other options. Those extra costs typically get passed on to consumers.

The shift is also hurting China’s economy. Its gross domestic product in the second quarter of this year grew at its slowest rate in 26 years.

American businesses are still being hit in another way — by the retaliatory tariffs China has put on U.S. exports.

Because of retaliatory tariffs, some Chinese importers are not buying U.S. products and are instead doing business with suppliers from other nations, as they have with soybeans. That means U.S. producers are losing out on valuable income, especially if they cannot find other buyers for their goods.

U.S. farmers and other manufacturers could reduce prices to try to compete with other nations, but many of them are already operating on thin profit margins. If they reduced prices further, they could go out of business.

China is threatening further retaliation if the newest tariffs go into effect. It is unclear what those countermeasures would be.

What do we know about how much existing tariffs have cost?

Trump’s tariff increase will generate an estimated $30 billion worth of taxes on Chinese goods per year.

It’s one of the reasons Trump has claimed tariffs are boosting the U.S. economy, but the Tax Foundation, a Washington-based think tank, estimates the current tariffs on Chinese goods will reduce U.S. GDP long-term by $50 billion. That doesn’t include other tariffs the Trump administration has imposed on other countries as a negotiating tactic, including an across-the-board tariffs on steel and aluminum. 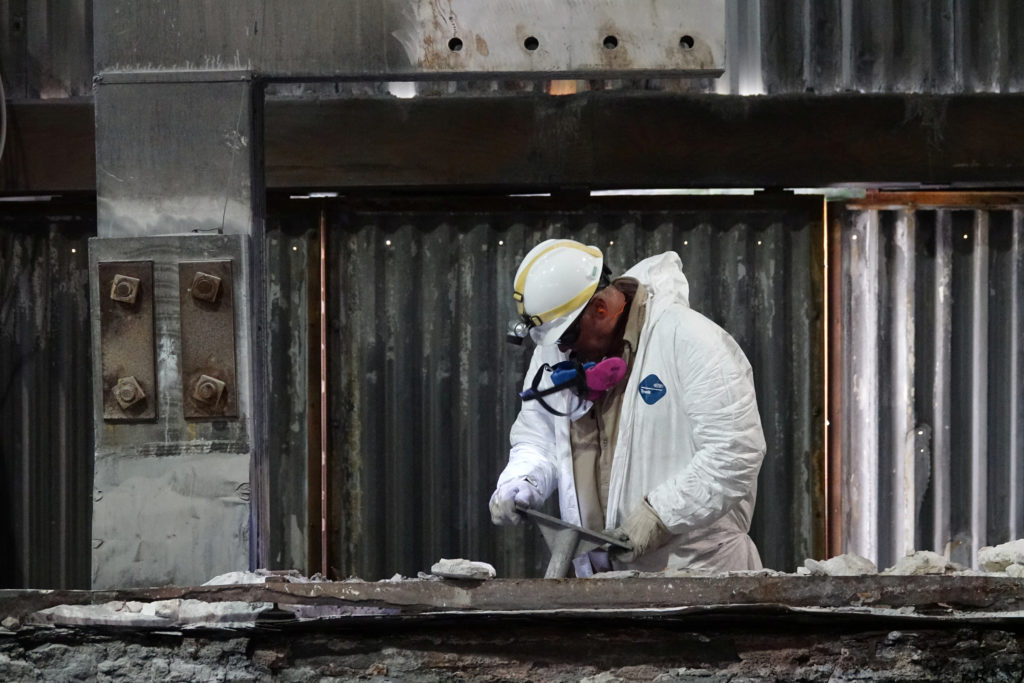 A worker is seen inside the Magnitude 7 Metals LLC aluminum smelter which is reopening and taking on hundreds of local workers in New Madrid, Missouri, on May 3, 2018. The aluminum industry has benefitted from Trump’s tariffs but it has increased prices for U.S. businesses who buy the material. Photo by Karen Pulfer Focht/Reuters

Some specific industries, such as aluminum manufacturers, have benefited from the tariffs. But that has come at a cost to U.S. customers who have to pay higher prices.

By October and November 2018, tariffs on China and other countries cost U.S. consumers and businesses $4.4 billion a month, according to a recent study by researchers from the Federal Reserve Bank of New York, Princeton University and Columbia University. Of that, the federal government recouped about $3 billion in import taxes.

But about $1.4 billion was lost entirely because tariffs make the economy less efficient–consumers might be buying fewer goods, for example, but they are paying more overall because of the price hike. The $1.4 billion loss amounts to an annual cost of about $133 per household, according to the researchers.

Looking at the Consumer Price Index, which measures the cost of consumer goods such as food and clothing, the researchers found the prices on products subject to the tariffs increased between 10 percent and 30 percent after the tariffs were implemented.

The cost per household is expected to rise significantly with the new round of tariffs because it targets goods that average consumers purchase more frequently such as clothes and computers.

Even if the goods Americans purchase are not ‘made in China,’ they could still cost more.

Kadee Russ, an economics professor at UC Davis likens the effects of tariffs to “a hidden sales tax.”

“It’s going to be hard to see, because it doesn’t show up on your receipt like a local sales tax,” but it’s still there, she said.

Russ estimates the new tariffs will end up costing consumers a couple of hundred dollars per year, and warns that retailers could spread the cost of the tariffs across their products. So, even if the goods Americans purchase are not “made in China,” they could still cost more because of the tariffs.

Who suffers the most?

Areas with high concentrations of agriculture and metal production are most at risk of feeling the negative effects of tariffs. Those industries have been singled out in the tariffs Trump imposed on steel and aluminum, as well as by China, which imports a large amount of U.S. agricultural products.

The Trump administration has distributed billions of dollars in aid to farmers who have been harmed by the tariffs, but Trump has promised the pain will be temporary.

“Our farmers will ultimately be the biggest beneficiaries,” Trump told reporters Friday on the White House lawn, pointing to a new trade deal he announced earlier in the day that is expected to increase beef exports to the European Union. Trump has credited his threats of tariffs for bringing the EU to the negotiating table.

Economists have warned that the damage done by tariffs is irreparable because China is shifting its supply chains away from the U.S. and will not be able to easily shift back to purchasing produce from American farmers when tariffs are eliminated.

By sheer number, regional metropolitan centers such as Chicago and Dallas export the most products that are affected by tariffs, but in rural areas a larger share of the economy is affected, according to a study published in October 2018 by the Brookings Institution, a Washington-based think tank. 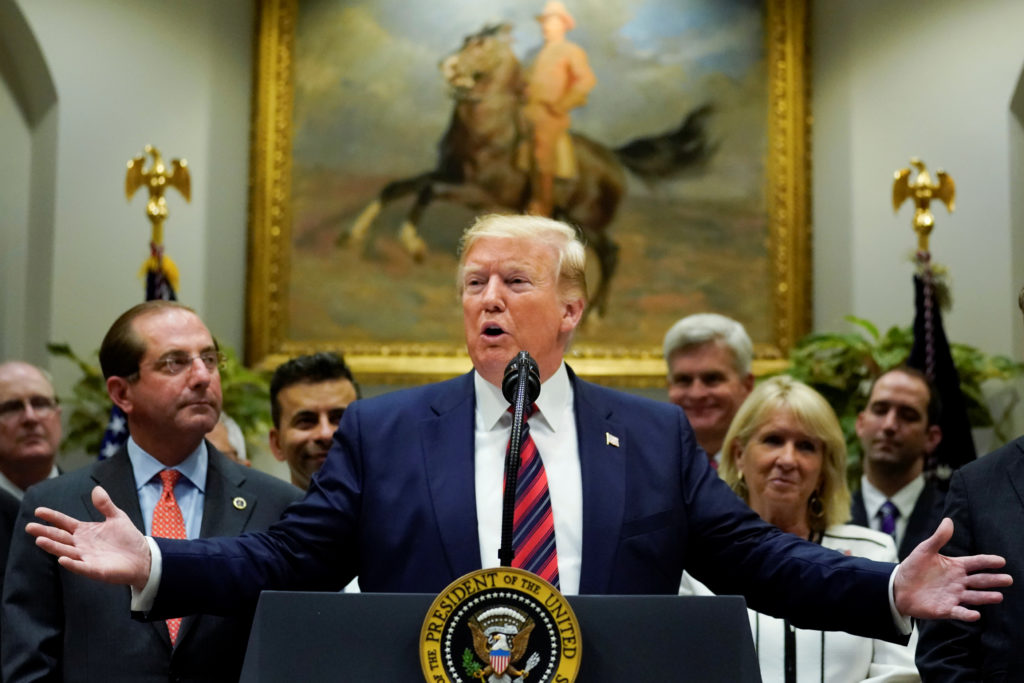 President Donald Trump reiterated his threat to impose new tariffs on China during an event to discuss a proposal to end surprise medical billing in the Roosevelt Room at the White House on May 9, 2019. Photo by Jonathan Ernst/Reuters

Counties that voted for Trump in 2016 are twice as likely to be affected by the trade battle with China than those that voted for Hillary Clinton, the research also finds. That’s because Trump won a number of rural counties whose economies depend heavily on certain goods, such as agricultural products, that are included in China’s retaliatory tariffs

That observation is backed up by a study conducted by four academic researchers and released earlier this year. They found workers in “heavily Republican counties were the most negatively affected by the trade war.”

Trump’s base seems to be sticking by him when it comes to his stance toward China, but the views held by all Americans are more complex.

In September, only 42 percent of Americans said they thought the trade war with China was good for jobs, according to an Axios poll. But the percent of Americans’ who have a favorable view of China has also dropped significantly since the tariffs went into place.

Fear of the unknown

In addition to the more immediate effects, a trade battle injects unpredictability into the economy that can cause many businesses to rethink their long-term investments.

“If you’re a firm considering enlarging your relations with China, you could put that on ice for the time being,” said Gary Hufbauer, a senior fellow at the Peterson Institute for International Economics and a former deputy assistant secretary for international trade and investment policy at the U.S. Treasury Department.

If enough companies pull back on their expansion, that can make a dent in the growth of both U.S. businesses and China’s economy.

That’s exactly what investors and the Federal Reserve fear.

The Federal Reserve lowered interest rates this week for the first time since the Great Recession. Fed Chair Jerome Powell noted that part of the reason for the cut was the uncertainty U.S. trade wars are injecting into the economy. The next day, Trump announced his new tariffs threat and stocks plummeted.

On the other hand, other countries are benefiting from the U.S.-China trade dispute. Brazil has boosted its soybean production to make up for the soybeans China is not buying from the U.S. Other nations, such as Thailand and Malaysia, could also benefit if U.S. companies decide to purchase from them instead of China.

But so far, those larger effects are still hard to measure. No one is sure exactly how long the tariffs will be in place and are cautious about making any rash decisions that would be difficult to reverse.