Another Take on a Volatile Market 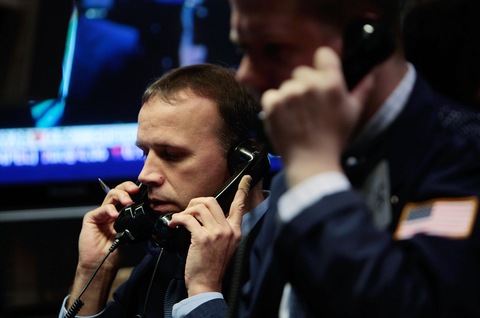 Financial professionals work the phones on the floor of the New York Stock Exchange in New York City. Photo by Chris Hondros/Getty Images.

Sorry I didn’t post Tuesday, amidst all the turmoil. I was giving a speech at Chautauqua, monitoring the markets aloud as the talk progressed.

The talk focused on an issue we’ve been exploring for the NewsHour in a series of stories now in the editing stage. The issue: economic inequality. I ended yesterday’s talk with a “thought experiment”:

If you’re troubled — or terrified — by the panic of the past week, consider this possibility: inequality is what’s behind it.

If most Americans are no longer sharing in what economic growth we have, the economy we’ve built may simply not work. There may not be enough purchasing power out there to buy what we produce, given the imbalance between the have-somes and the have-mores. Maybe that’s why so many Americans are so heavily in debt. Maybe that’s why they took out the subprime home equity loans that led to the Crisis of ’08. So maybe growing inequality explains the last crisis.

And maybe it helps explain today’s crisis. If most Americans — as consumers — can’t afford to buy what most of us — as producers — sell, and if government spending then threatens to slow, maybe shares of our companies ain’t worth what they used to be.

Which would explain a stock market plunge.

One prominent commentator has been warning of this all along: Paul Krugman. Though he’s a Nobel Prize-winning economist, he is also a self-described “liberal” — a strident one. The convention, these days more than ever, is to balance everything an economic “liberal” says with an economically “conservative” point of view.

At the moment, though, any honest reporter would have to concede that Krugman’s predictions have stood the test of time far better than those of his economic opponents.

The “bond vigilantes” were supposedly saddled up to demand higher interest rates on U.S. borrowing if we didn’t cut the deficit and debt. Krugman called them “invisible” and noted that for the past year, rates have been going down, not up.

(We noted the same trend as the debt ceiling “crisis” came down to the wire.)

On Monday, on the trading floor of one of the world’s largest money managers, Abdullah Karatash, head of U.S. Fixed Income Credit Trading, explained how the rate on the 10-year U.S. Treasury bond (or “note”) was continuing to do just the opposite of what deficit doomsayers had predicted.

“It’s not the whole story, but something like this threatens to develop:

We’ll never know for sure if “fears of austerity” are what’s driving down every stock market in the world at the moment, but it seems the most plausible explanation out there. Giving it support is the behavior of 10-year Treasuries. Right now, to lend money to the U.S. government for 10 years earns an investor an astounding 2.11 percent. For 10 years! Despite all the despair over deficits as far as the eye can see, and therefore a swelling national debt. Last night, with foreign markets trading our bonds, the rate dropped to 2.03 percent.

Over the past 131 years, the 10-year interest rate has NEVER been that low. Never.

That can only tell you one of two things.

One: Global investors are so scared of every other form of investment, they’re grasping at U.S. bonds like life rafts on the Titanic. The more investors flail over to U.S. bonds, the less the United States has to offer in interest to attract them.

Two: Investors expect interest rates to stay low for a long time in the United States. Like 10 years long. Why would they remain low? Because the prospects for the U.S. economic growth are so dim, there’s no chance of a rising cost of labor (wages), or of goods and services (prices) or of money itself (the interest rate). That’s why Japan’s interest rate is so low: near 1 percent to borrow for 10 years, despite an enormous debt-to-GDP ratio of more than 2:1. It may seem crazy; to a lot of people it does. But low growth expectations explain low Japanese interest rates.

As for low interest rates in the U.S., investors are probably saying both (1) – “we’re afraid of investing anywhere else” — and (2): “we’re not afraid that a growing U.S. economy will lead to higher interest rates anytime soon.”

A final point worth pondering is the nature of market movements of late. While it has always been true that investors can move in herds when excited, I can’t remember ever seeing the kinds of swings we’ve seen in the past week: a Dow that’s up 200 points one minute, down 200 the next.

The only possible explanation is “flash trading”: computer algorithms trading against one another, explained in layperson’s detail by Felix Salmon and Jon Stokes in Wired magazine back in December.

This wouldn’t explain why markets are crashing, mind you; only why they’re bouncing around so dizzily as they drop.

Hey, if the Dow ends up in positive territory by the end of the day, it wouldn’t surprise me. But then, nothing would, except maybe a major rally in Europe. Debt and austerity on the continent are proving an ever more toxic mix. And if the PIIGS can’t pay the piper, all the banks holding their paper will be on the hook for major losses, including even American banks, perhaps. No wonder financial stocks are down even more steeply than the overall market right now.