Are you in America’s shrinking middle class?

When Chuck Allen was a second grader, his father moved the family to Goldsboro, North Carolina, for a job. Forty-five years later, Allen serves as mayor of his hometown, where a shrinking middle class struggles to find work, an increasingly common problem nationwide.

Goldsboro once reaped wealth from tobacco and manufacturing. Allen says locals have “always held our own” through good times and bad. But nowadays, this small city in East Carolina farm country relies on Seymour Johnson Air Force Base for economic stability, and he said job applicants often find “they have more qualifications than they do job.”

“The jobs for the middle class just don’t seem to be there,” he said.

For nearly two decades, Goldsboro has endured some of the nation’s steepest declines in economic status, according to a new Pew Research Center study. And the city’s losses are part of a “pervasive trend” that first unfolded across the United States four decades ago, explained Rakesh Kochhar, associate director of research at Pew Research Center.

The middle class shrank in 203 out of 229 U.S. metropolitan areas, representing three-quarters of the U.S. population, based on analysis of Census Bureau data from 2000 to 2014, Kochhar said.

“The share of people in the lower-income tier or the upper-income tier were on the rise in the vast majority of metropolitan areas,” he said. “We observed nationally a polarization of Americans into opposite sides of the income distribution.”

In 2014, one person living alone needed to earn between $24,000 and $72,000 to be considered middle class. The Midwest and the Northeast fared best in preserving their middle-income households. Maintaining education and service-sector jobs made a difference. Northeastern metropolitan areas also held the largest share of upper-income households, while the largest lower-income communities tended to be in the South and Southwest.

Some communities lost economic standing due to global manufacturing competition, Kochhar said, while others, such as Midland, Texas, made gains thanks to a rise in oil prices. 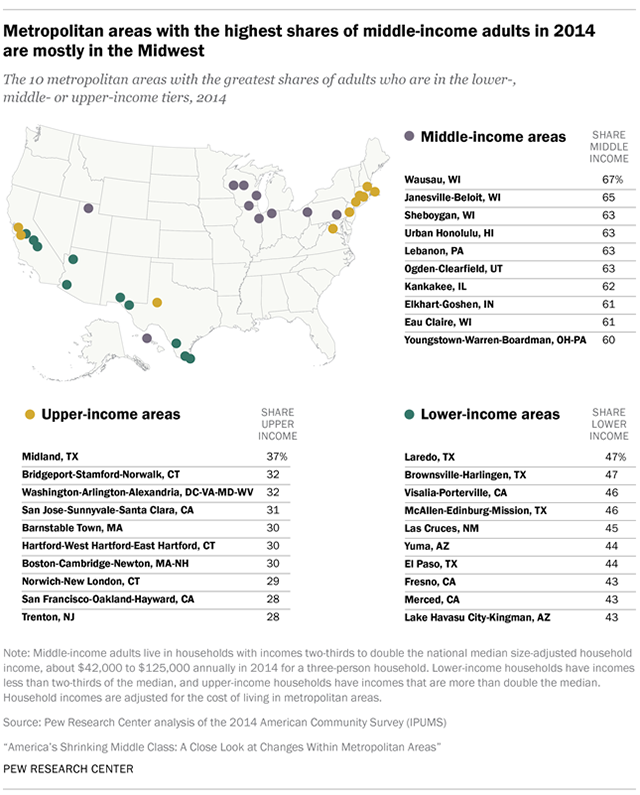