Column: Which currencies are overvalued? The Mini Mac Index tells all

The “law of one price” holds that identical goods should trade for the same price in an efficient market. But to what extent does it actually hold internationally?

The Economist magazine’s famous Big Mac Index uses the price of McDonald’s Big Macs around the world, expressed in a common currency (U.S. dollars), to estimate the extent to which various currencies are over or undervalued. The Big Mac is a global product, identical across borders, which makes it an interesting item for this purpose.

The “law of one price” holds that identical goods should trade for the same price in an efficient market.

But you can’t buy a cheap burger in Beijing and eat it in New York. So in 2013 we created our own Mini Mac Index that compares the price of iPad minis across countries. iPad minis are a global product that, unlike Big Macs, can move quickly and cheaply around the world. As illustrated in the graphic below and explained in the video above, this helps equalize prices. 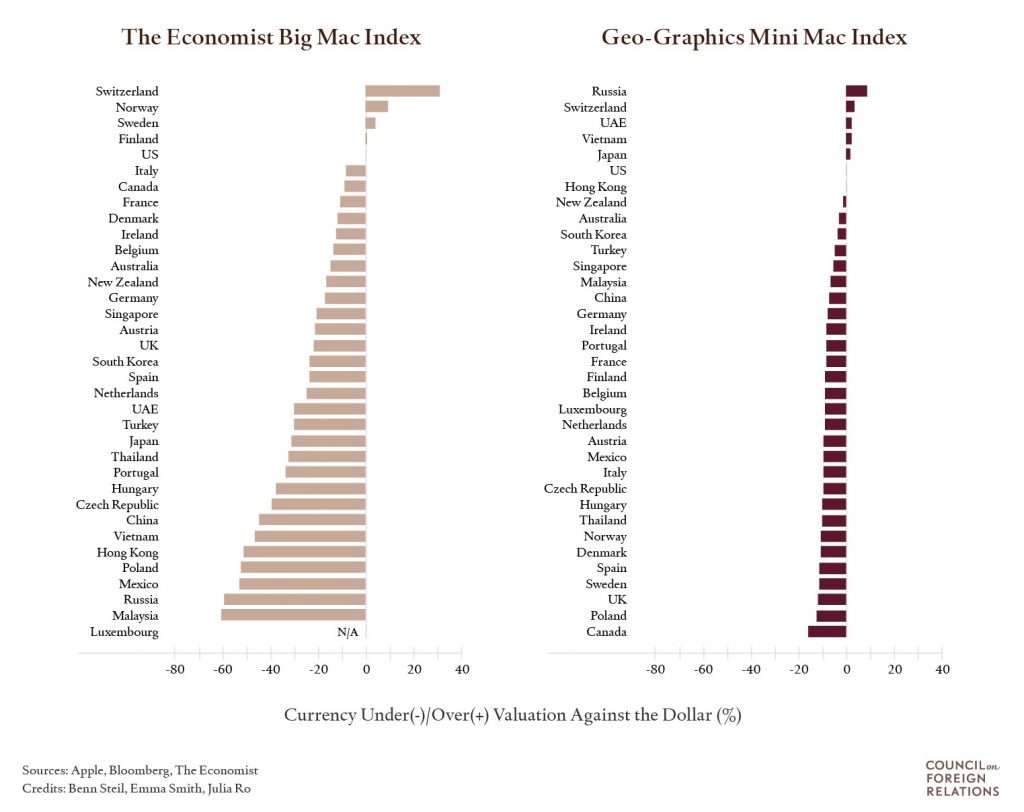 The Mini Mac Index also suggests that the U.S. dollar has become slightly less overvalued (down from 9 percent) since the beginning of the year. The British pound is now 12 percent undervalued after its sharp fall on the back of the Brexit vote. Having been undervalued by 10 percent at the beginning of the year, Japan’s currency, the yen, is now slightly overvalued, threatening to derail efforts to push inflation to the Bank of Japan’s 2 percent target. No wonder Japanese officials are contemplating currency market intervention to weaken the yen. Since January, China’s currency, the renminbi, has weakened slightly and is now 7 percent undervalued — a more sensible estimate than the 45 percent undervaluation implied by the Big Mac Index.

The evidence is clear — the Big Mac Index doesn’t cut the mustard.

Editor’s Note: This column was originally posted on the Council on Foreign Relations’s Geo-Graphics economics blog.