Editor’s Note: A version of this story originally appeared on Next Avenue, a PBS platform featuring stories for people over 50. You can read the original story here.

As more baby boomers retire, companies are increasingly losing valuable institutional knowledge because they fail to ask those older employees to document key information before they walk out the door, according to a recent survey by the staffing company Express Employment Professionals.

Employment experts refer to this type of knowledge as “tribal knowledge” or “tacit knowledge.” As Dorothy Leonard, a Harvard Business School professor and co-founder of the consulting firm Leonard-Barton Group told The Chicago Tribune: it’s “stuff in your head that’s never been written down, never been documented. Maybe you’ve never articulated it.”

Why this matters: 4 million boomers a year leave the workforce and boomers comprise 31 percent of workers; 56 percent of retiring boomers are in leadership positions. That’s a lot of knowledge going to waste that could be extremely useful to the workers (usually younger ones) who’ll take over for the retirees.

“Such a poor transfer of knowledge was surprising to us,” said Bill Stoller, CEO of Express Employment Professionals. “You’ve got to have a process in place to have someone follow in the footsteps of someone retiring. It doesn’t appear companies are thinking about that. We’re hoping the survey will be a wake-up call to American business.” 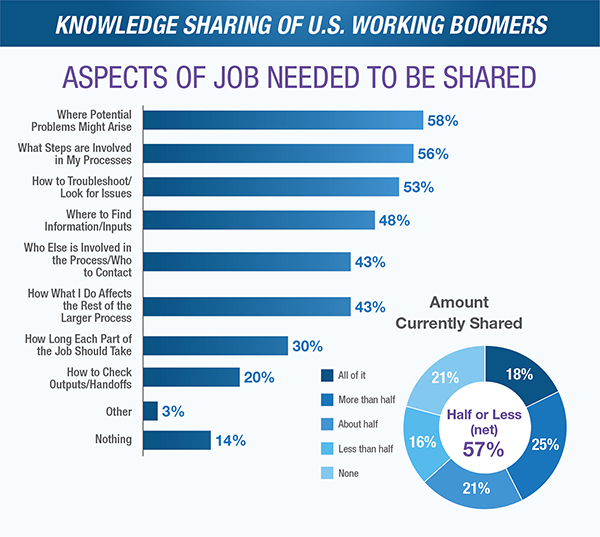 The survey echoes an earlier one of 2,403 retirees by Transamerica Center for Retirement Studies. In that one, only 4 percent of retirees said their employers encouraged employees to participate in succession planning, training and mentoring.

Paul Rupert, founder of Respectful Exits, a new initiative aiming to get employers to better serve retiring boomers, found the Express Employment Professionals survey results maddening, if not surprising. (His organization just launched ThePhazer, a tool to help empower older workers to get phased retirements and flexible work hours from their employers.)

“What is described as the systematic failure of companies to mine their pre-retirees for critical knowledge and intellectual property is part of a general failure to appreciate the value of who and what is walking out the door of today’s knowledge-based employers,” Rupert said. “Wasting the talents of a whole generation and crippling the potential effectiveness of the next cohort precludes the kind of creative win-win solutions that our economy and contributors need.”

It’s not that boomers wouldn’t pass along information and insights they have, if asked.

A striking 81 percent of the boomers surveyed by Express Employment Professionals say they are willing to mentor the next generation.

And younger workers like being mentored: In a recent AARP survey, 79 percent of workers age 18 to 29 said older workers give them the opportunity to learn new skills.

Who is transferring knowledge well

Not all employers are knowledge-transfer duds, of course.

Duke Energy, the largest regulated utility in the country, is taking the boomer brain drain seriously, with a variety of initiatives. The goal: to ensure younger workers learn what older ones have picked up over the years. Duke Energy managers have been asked to create knowledge-transfer plans for their team members closing in on retirement; some have shot videos to do so. New staffers sometimes shadow older ones, too.

81 percent of baby boomers say they are willing to mentor the next generation.

The Society for Human Resource Management (SHRM) notes that Siemens, the U.S. subsidiary of the Germany-based global manufacturing and electronics firm Siemens AG, is also making knowledge transfer a priority. That makes sense: 34 percent of its employees are boomers and 43 percent are Gen Xers, coming up right behind them.

Siemens partnered with Clemson University to fund a three-year undergraduate research project to transfer institutional knowledge from its boomer workers to its millennials (who comprise 23 percent of its workforce). The company now combines job shadowing, mentoring and formal training. But “no more death by PowerPoint,” an HR exec told SHRM. Millennials, Siemens learned, don’t want to be talked to sitting in a conference room. They want a conversation.

GM has an internal mentor portal to help transfer wisdom. And Michelin North America offers senior employees phased retirements, allowing them to gradually wind down through part-time work, training younger staffers while they do.

Stoller said that his company has been working hard at knowledge transfer, too. For instance, one of its regional vice presidents was shadowed by a successor for six months before the VP retired in December. Another retiree there is being kept on payroll as a consultant for the next year or so. That way, the person taking over will be free to give the retiree a call anytime and the consultant will assist the firm when necessary.

“That’s what companies are going to have to do,” Stoller said. The sooner, the better, he added.

Include a retiree’s successor in meetings with key clients and vendors a long while before the retirement day comes. Have a succession plan procedure in place that all employees understand. Doing these kinds of things avoids that awful day when workers realize the only person who knows something or has a key business relationship is no longer employed with them and they’re on their own.

What baby boomers say about their successors

The Express Employment Professionals survey also asked boomers how well they thought their successors would do following in their footsteps.

Just 44 percent said their employer has an adequate successor to replace them; 54 percent were “at least somewhat confident” in millennials taking on their roles.

I asked Stoller whether he thought the boomers were right or whether they just had a puffed-up opinion of themselves, believing no one could do their work as well as them.

“Probably a little of both,” he joked. Stoller added, however, that despite what boomers said, millennials aren’t necessarily the ones who will succeed them.

There are many talented Gen Xers in the workforce too, younger than boomers but older than millennials and ready to take on new responsibilities. Gen Xers: so often sadly overlooked.

Left: More than half of baby boomers have not shared enough knowledge with the people who will take over their job duties once they retire, a survey found. Photo by Getty images

Richard Eisenberg is a senior web editor at Next Avenue. He is the author of "How to Avoid a Mid-Life Financial Crisis" and has been a personal finance editor at Money, Yahoo, Good Housekeeping and CBS MoneyWatch.