Compare Democrats’ many Medicare-for-All proposals with this chart

Editor’s Note: Journalist Philip Moeller is here to provide the answers you need on aging and retirement. His weekly column, “Ask Phil,” aims to help older Americans and their families by answering their health care and financial questions. Phil is the author of the new book, “Get What’s Yours for Medicare,” and co-author of “Get What’s Yours: The Revised Secrets to Maxing Out Your Social Security.” Send your questions to Phil.

Now that Democrats have taken control of the U.S. House of Representatives, they have promised to hold hearings on proposals to move the U.S. toward the type of universal health care found in other industrialized nations, including our northern neighbors in Canada. These proposals range from extending the current Medicare program to people age 55 and older, to a single-payer system that does away with insurance companies and employer-based health insurance altogether.

No fewer than eight proposals have been put forward to date, and more will surely follow.

To be clear, with the Republicans in charge of both the Senate and the White House, there is no chance any far-reaching plans will be enacted. Even if Democrats were to gain control of the White House and both houses of Congress in 2020, it’s unlikely we would see substantial moves toward universal health care anytime soon.

Any serious effort to change how we pay for health care will require years of research and discussion.

Look how long it took the Democrats to enact the Affordable Care Act. Congress did not pass the law until two years after President Barack Obama took office, and lawmakers had already been debating similar health care proposals for decades. Implementing Medicare for all would likely take even longer, given that it is a much more consequential overhaul than the ACA.

Furthermore, people on both sides of the political aisle think any major change to the nation’s health care insurance system would need bipartisan support to avoid the kind of political and legal chaos that has surrounded the ACA since it become law.

Given such an extended timeline, it would be easy to view the current health care agenda of House Democrats as simply playing to their base – President Trump wants his wall; Democrats want to expand affordable health care.

There doubtless is some truth to that view, but it is still possible that a Medicare-for-All “light” measure could be enacted without the extended process that accompanied the ACA. Extending Medicare to those aged 55 to 65, for example, might not be very disruptive to other markets, and could be a good transitional vehicle to broader change.

It is also true that any serious effort to change how we pay for health care will require years of research and discussion. Getting on with the work now is hardly jumping the gun. Focusing attention on different ways of changing the system is also essential to inform people about what’s at stake when they cast their ballots in 2020.

Here is a graphic with a brief overview of what each proposal entails. 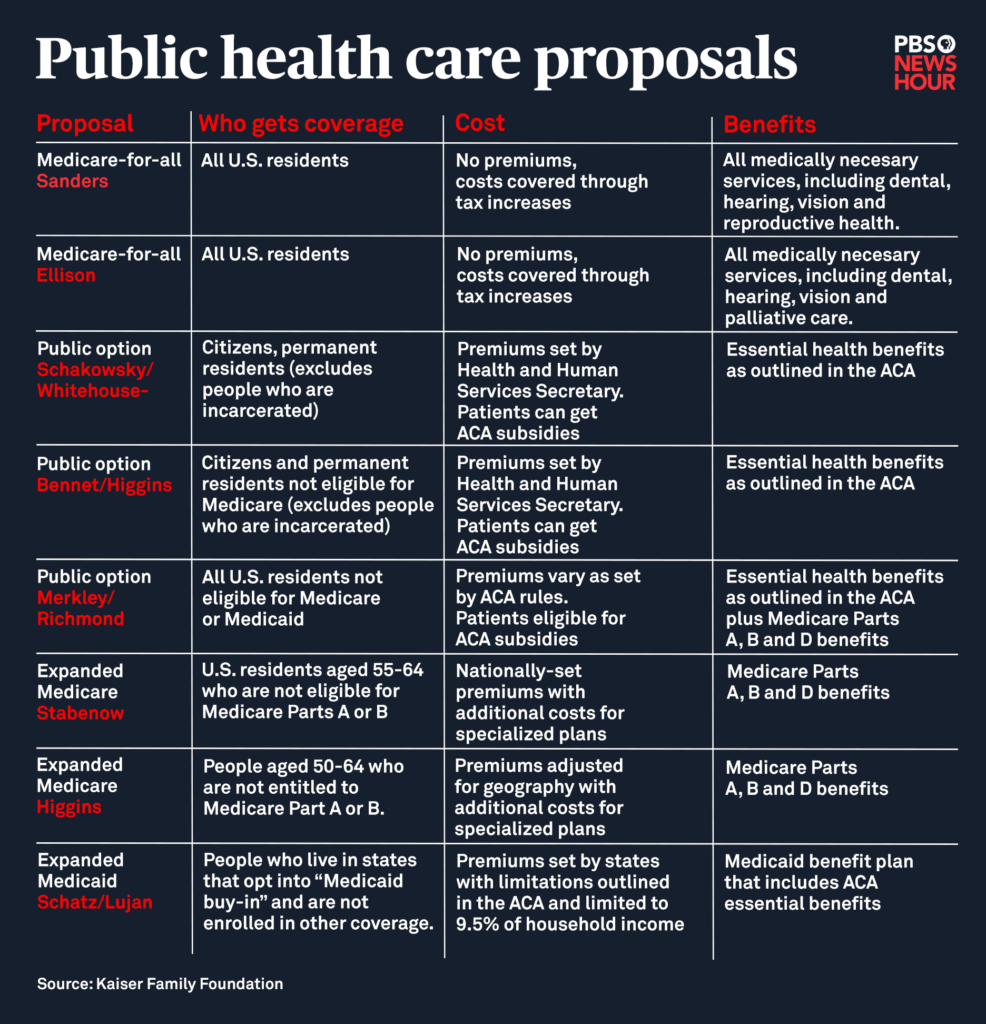 For a more in depth look at each of the eight proposals, the Kaiser Family Foundation has a thorough explanation as well as an interactive tool that permits people to see a more detailed side-by-side comparisons of different proposals.

Tricia Neuman, head of Kaiser’s Medicare policy team, told me that the eight plans represent a very early stage in what likely will be an extended period marked by more research, hearings, and proposals. The proposals themselves are more statements of intent than fully defined plans. That’s especially true when it comes to their price tags.

For example, three of the plans to expand Medicare would not raise taxes but would require people to pay for the new coverage. The current Medicare program would not be affected by the proposals. Given that current Medicare beneficiaries pay much less for their care than it costs, enacting any of these proposals would create much higher premiums for younger enrollees. Such details, which are hardly inconsequential, remain to be worked out.

Further, the Congressional Budget Office has yet to “score” these plans, which entails estimating their budgetary impact. When this happens, you’ll know that Congress has finally gotten serious about the legislative process.

And now for some reader questions.

Christine – South Carolina: I’ve been on Medicare for 20 years, but recently got a letter from Social Security saying I’d been dropped because I was no longer considered disabled and that my disability benefits and Medicare eligibility would end. I have no idea where this came from as I am diagnosed with high blood pressure and PTSD, major depression, and related mental illnesses. I need several prescription drugs but can’t afford all my bills now, and think I will need to get food stamps. I am way below poverty level, but they say I’m going to lose my Medicaid as well. Phil, please help me. I’m terrified.

Phil Moeller: I’m so sorry to hear about your problems. Getting hit with all of these issues at once can be overwhelming. I have no magic fixes here but a couple of ideas.

The State Health Insurance Assistance Program (SHIP) provides free Medicare and Medicaid counseling. I’d call or contact the South Caroline SHIP office and see if they have any ideas of recommendations for resources to help you. I’d ask if they know any pro bono attorneys who could help you challenge Social Security’s decision to drop you from disability.

You might be able to get health insurance from the South Carolina insurance exchange. Here’s a link where you can begin.

South Carolina has drug assistance programs that might help you. Here’s a link to find out more.

If you haven’t already done so, I’d also call the offices of your major doctors and ask for their help during this very difficult time for you.
I wish I had more ideas.

Please let me know how things go. My best wishes are with you.

Laura – Connecticut: Is Medicare free to people 65 and over?

Phil Moeller: That would be nice, but the answer is no.
Medicare Part A, which covers hospital and nursing home care, charges no premiums to anyone who has worked long enough to qualify for Social Security. But it isn’t free, as there are deductibles and charges for long stays.

Jack — Florida: My wife, age 75, went to a hospital by EMS ambulance travel. She had a medical emergency. Later, EMS sent us a bill for over $700 and said Medicare had denied this claim. However, her medical condition necessitated the ambulance. Only three days later she was called back into the hospital and admitted. We live in a very rural area with no back-up transportation. The EMS medics didn’t say anything about Medicare not covering this ride. We’d like to appeal the denial and wonder if you can suggest a strategy?

Phil Moeller: I sympathize with your situation but, unfortunately, I do not have any great suggestions for your appeal. If her doctor confirmed that her situation was life threatening, perhaps it might help. However, Medicare can be very firm in its denials of ambulance claims, and the agency is especially sensitive to this issue because of repeated abuses of this benefit by ambulance operators and, perhaps unintentionally, Medicare enrollees.

The fact that the EMS medics didn’t say anything likely has no bearing on your claim. These medics are supposed to protect your health — not be experts on Medicare coverage rules.

Left: Sen. Elizabeth Warren, D-Mass., speaks during an event to introduce the Medicare for All Act of 2017 on Capitol Hill on Sept. 13, 2017. Photo by Yuri Gripas/Reuters