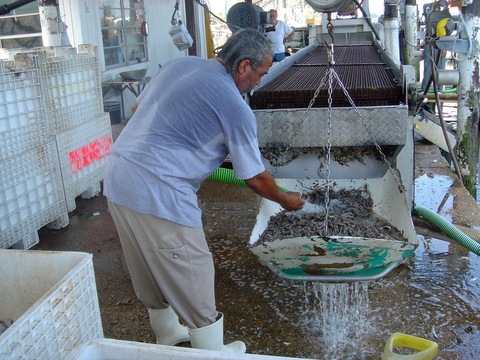 The state of Louisiana is about to reopen several state-controlled fishing grounds that were closed because of the Macondo oil well disaster. You’d think that fishermen would be thrilled with that idea. You’d be wrong.

A couple of dozen very unhappy men gathered on the front porch of the Riverside Restaurant on Highway 23 in Venice, La., this week. If you watch TV news, you’ve seen the inside of the restaurant more than once. It’s as much a community center as it is a place to eat. Innumerable television crews have conducted interviews there.

The Riverside is owned by Acy Cooper, who is also vice president of the Louisiana Shrimpers Association. He called an impromptu meeting for 10 a.m. local time, but the people who showed up never actually managed to make it inside. Instead they stood around outside, arguing loudly and passionately over the anticipated reopening on Monday of two shrimping grounds on either side of Venice. They were so passionate that they attracted the attention of several Plaquemines Parish Sherriff’s Deputies, but there was no real disturbance.

Cooper and most of the people there said there’s still a lot of oil in those fishing grounds, and they’re worried that if they’re reopened, oil-tainted seafood will wind up on somebody’s table. If anybody gets sick, Cooper thinks the reputation of Gulf seafood will never recover.

A local dock owner vehemently disagrees. He says he’s spent $700,000 on overhead recently, and has no income to show for that investment. He says that if the shrimpers don’t go back to work this season, there won’t be another season next year.

The state Department of Wildlife and Fisheries and the Department of Health and Hospitals have been testing fish since the beginning. Office of Fisheries Assistant Secretary Randy Pausina told us they haven’t found a single sample that would have posed a threat to human health.

But despite that apparently clean bill of health, Ewell Smith says that Louisiana seafood’s reputation has taken a major hit. Smith runs the Louisiana Seafood and Promotion Board. His agency was part of a publicity stunt earlier this week when the Super Bowl champion New Orleans Saints made the traditional visit to the White House. The seafood industry created a 30-foot-long shrimp and oyster “po-boy” sandwich for the occasion. Smith says it’ll take years and millions of dollars for similar promotions and advertising to restore confidence in the state’s products.

Pausina says the longer-term outlook for the fisheries is uncertain, because oil and the dispersants used to break up the original slick are toxic to the offspring of many different species that are harvested for food. The state has asked BP to pay for long-term promotional efforts and for scientific research projects to monitor the state of the fisheries. So far BP has declined.

Tom Bearden will have more on Gulf seafood safety on Friday’s NewsHour.