With energy prices plunging and increased competition from natural gas drilling, the coal industry has taken a hit in recent years. More than 30,000 American coal workers have lost their jobs since 2011.

So when tech consultant Amanda Laucher realized her brother in Greene County, Pennsylvania, the third largest coal-producing county in the country, was at risk of losing his job as a coal miner, she and her husband Jonathan Graham decided to help. They began driving about 500 miles from Chicago every weekend to teach him and others in the community how to code.

Laucher and Graham said they saw an opportunity to wean Greene County off an economy that is heavily dependent on energy. They recently relocated to Waynesburg, Pennsylvania, and co-founded Mined Minds, a nonprofit that offers free coding classes to laid-off coal miners and other unemployed workers. The group is still small, but hopes to jump start Pennsylvania’s version of Silicon Valley.

NewsHour Weekend sat down with Laucher and Graham to talk about their efforts.

What was the idea behind coming to Greene County, and starting up here?

Amanda Laucher: We were here for a holiday picnic with my parents, and my brother has always been a coal miner, and he started telling us this story of all of his friends have been laid off from the mine. He was really worried that he was going to be laid off as well, and he’s a father of three, he’s got a wife that is at home taking care of the kids. He said, “What am I going to do? How am I going to pay the bills? I’ve never had a day off from work, it’s not what I do. What do I do next?” And Jon said, “We know people who run boot camps in Chicago, San Francisco, New York…Why couldn’t we take that to Greene County? Why can’t we just start training him to be a software developer?”

Do they have to pay to be trained?

Laucher: The number one goal was nobody should have to pay to learn these skills. As you’ve been laid off from a coal mine, or an energy job, or some other job, generally you don’t have a lot of extra cash. Some of these boot camps cost you $10, 15, 25 thousand dollars, and in this area you just don’t have that kind of extra cash. So our goal was, from the get go, no participant has to pay. We are a 501(c)(3), so we can accept donations, sponsorships, and we’ve put a ton of our own money into it.

What sort of skills are transferable from coal mining, to this type of work?

Laucher: The logic. The idea that you’re solving problems constantly. They make decisions all the time that could risk people’s lives, and this is not nearly as serious. They think really carefully, they’re very thoughtful. There’s also the teamwork aspect of it. If you’ve got a group that can trust each other and work together and communicate, that’s amazing, that’s what we really need. They all go into the cage together, and they all come out together. That and a hard work ethic, being able to just carry on even when things are tough, and just keep going with it. 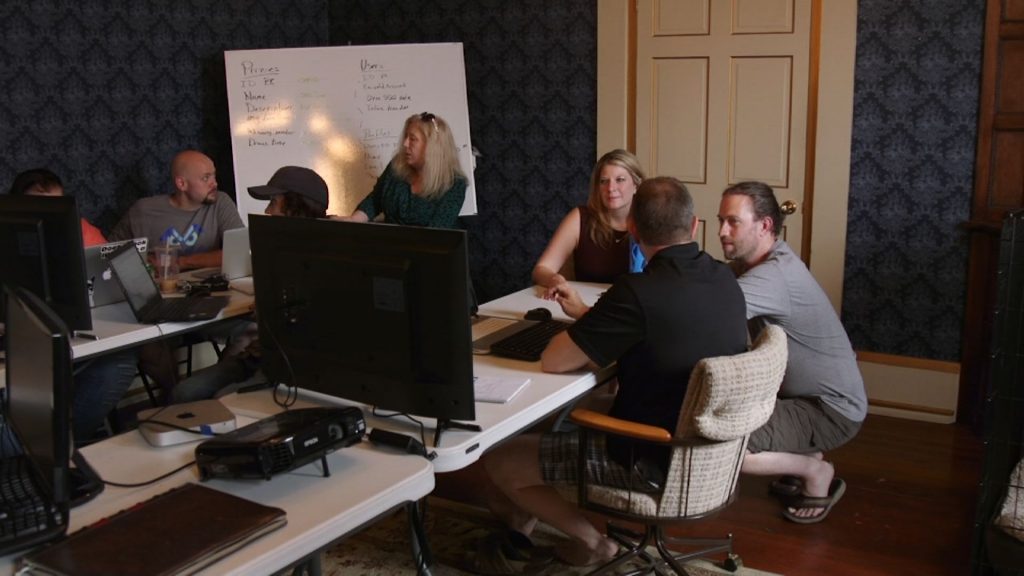 With a plunge in energy prices worldwide and increased competition from natural gas drilling, the coal industry has taken a huge hit in recent years. More than 30,000 American coal workers have lost their jobs since 2011. The nonprofit Mined Minds in Greene County, Pennsylvania, teaches people affected by the layoffs how to code.

How hard is it to train someone who doesn’t have a background in computer science?

Jonathan Graham: One of the things that we found most interesting is breaking people on how they learn. People came in expecting that we’d be stood at the front having them write notes and they’d learn and then have a job at the end of it. Whereas, right from day one we say, “Okay, get on your computers. We’re going to work in pairs.” So almost always people are working together; that’s one thing that’s different. All the code is shared. We’re always projecting someone’s code onto a big monitor, or projection screen, so that it’s all visible and open.

Laucher: A big part of our job is to ask basics, and to Google, and to literally fail a thousand times a day. We had met a guy over the weekend who said, “I would love to [code], but you’d have to deal with me failing a lot. I’d screw up all the time.” I said, “I’ve been doing this for many, many years, and I screw up every single day. The goal is to fail fast, and learn from your mistakes.” If you learn from it, it’s not even really a mistake, it was an experiment. We teach the scientific method. Have a hypothesis before you start writing some code, make sure you have an idea what you think it’s going to do, and then go from there. If it fails, great, at least you have more information. So we’re really able to teach people within six months, who have never written a line of code before in their life, to be writing fairly complex apps.

Is there sometimes a mental block when they first hear about your program, like, ‘Oh, I don’t think I can do that?’

Laucher: Yes. We had a woman who said right from the get-go, “I’m really bad at math. I did really bad at math in high school. I’m not sure I can do this.” And it’s like, “Okay, well, let me know when you start seeing math, because we don’t do arithmetic, or the types of algebra that you think about when you think about high school math.” She got past that blocker pretty quick, and now she’s great.

What do you see for the future of this county?

Graham: Why does the area need to be dependent on energy? Why can’t it be a tech hub? We couldn’t think of any reason why not, which is why we thought we should do this. So we see it as being one of the industries that is growing in the area, one of the employment opportunities that’s growing in the area, and hopefully one that will influence other types of jobs coming in as well. The area isn’t just about energy; it isn’t just about coal. Other things can happen here.

This transcript has been edited for length and clarity. You can watch more on the PBS NewsHour tonight.

Left: The nonprofit Mined Minds in Greene County, Pennsylvania, teaches people affected by the layoffs how to code. These are the co-founders, Jonathan Graham and Amanda Laucher.