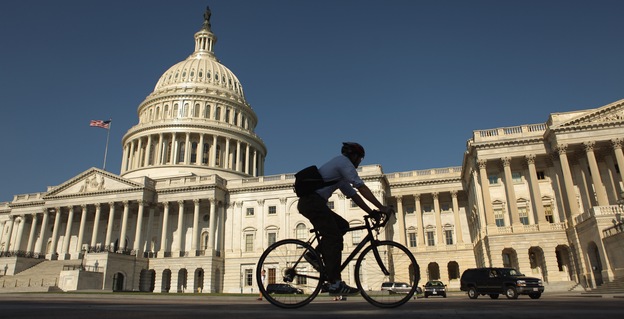 Paul Solman: Larry Kotlikoff is a dear friend of both mine and the Making Sen$e Business Desk, appearing weekly on PBS NewsHour online to answer your questions about Social Security as “Ask Larry” and showing up at the local tennis court to flail about with me.

But his longest-standing passion may be what he calls “generational accounting” and its abuse by the U.S. government, a passion that has bubbled over in books like “The Clash of Generations” and “The Coming Generational Storm,” co-authored with Scott Burns and reviewed when it came out in 2005 by Paul Krugman in the New York Review of Books. (Read Larry’s response to Krugman’s review here.)

Larry has now helped craft, with economist Alan Auerbach, a bill for Congress, the so-called “INFORM Act.” It is designed to rectify what they see as the depredations wrought on the U.S. economy by what I once called, in reference to Enron, “ledger-de-main” accounting.

In the next post, I’ll respond since I don’t happen to think the United States fiscally resembles Detroit, Greece or, god forbid, Cyprus, though it’s often put in the same sentence with them. But first, let’s hear Larry out.

Larry Kotlikoff: Detroit just filed for bankruptcy, endangering, among other things, the pensions and health care benefits of 21,000 municipal retirees. But Detroit didn’t just go bankrupt. It’s been bankrupt for years. Yet no one, particularly its accountants and actuaries who spent years cooking the books, was paid to admit it.

Washington is also bankrupt and has been for years. Just like Detroit, successive administrations and Congresses from both parties have spent decades hiding the real magnitude of our county’s fiscal liabilities.

The debt Uncle Sam publicly acknowledges — official federal debt in the hands of the public — is now $12 trillion. But the true measure of our debt — the one suggested by economic theory — is the fiscal gap, which totals $222 trillion. The fiscal gap is the present value of all future expenditures, including servicing outstanding official federal debt, minus the present value of all future receipts.

Detroit’s main means of hiding its true liabilities was discounting its future obligations at a rate far higher than appropriate, thus giving the appearance that less saving was needed to cover the shortfall.

Washington’s dirtier trick has been to keep virtually all of its future liabilities off the books, which creates the vast ocean separating the fiscal gap and the official debt. Decisions about what debts to put on and what debts to keep off the books are not grounded in economics; this duplicitous accounting is grounded in linguistics.

The different checks my 68-year-old friend Paul receives from the U.S. Treasury are a good example. Except for the amounts, the greenish-yellowish checks are identical, with “U.S. Treasury” printed in majestic old English font and a lovely engraving of the Statue of Liberty. One of these periodic checks is for Paul’s Social Security benefits. The other is for interest and principal on his U.S. Treasury bonds. Each comes like clockwork. Each is owed to Paul in every economically meaningful sense.

The reason that Paul’s future Social Security benefits are not official I.O.U.s is because Congress chose to call Paul’s contributions to the system “taxes” rather than “borrowing” and his future benefits “transfer payments” rather than “return of principal plus interest.”

In short, it is the words that the government attaches to its receipts and payments, not the economic content of these receipts and payments, that determine what is labeled debt and what is left off the books. Indeed, with the right choice of words, Uncle Sam can report any level of the debt at any time in the past, this year or in the future regardless of the true underlying fiscal policy that he’s running.

The fiscal gap doesn’t suffer from this economic labeling problem; it generates the same present value shortfall of expenditures over receipts no matter what labels are applied. The reason is simple: The fiscal gap measures all future expenditures (all outflows) net of all future receipts (all inflows) regardless of what they are called.

No measure of fiscal sustainability is perfect. But surely we need measures that reflect what we are actually doing, not our word choice. By the careful choice of fiscal labels, post-war administrations and Congresses have accumulated potential off-the-book liabilities many times greater than our nation’s official debt. Unless we begin to systematically measure and address our long-term fiscal imbalances, no government programs, whether it’s the military or Social Security, will be secure.

This said, acknowledging our potential fiscal obligations and deciding how to deal with them rules out neither productive government investments in infrastructure, education, research or the environment nor pro-growth tax reform. The fiscal gap tells us whether current policy is sustainable, what’s needed to make current policy sustainable, and the tradeoff between adjusting policy now or later.

Given the $222 trillion fiscal gap, which is measured based on the Congressional Budget Office’s (CBO) long-term fiscal projections, current policy is clearly not sustainable. Making it sustainable requires either an immediate and permanent 64 percent increase in all federal taxes or an immediate and permanent 38 percent cut in all spending or some combination of tax increases and spending cuts.

Failure to make one of these adjustments or a combination of them leaves an even larger fiscal gap for our children and future generations to cover. Thus, fiscal gap accounting is an integral part of generational accounting — knowing which generations will pay for what the government spends.

Foreign governments and international agencies like the International Monetary Fund have being doing fiscal gap and generational accounting either on a routine or periodic basis for decades. This analysis has led Norway to set up a Generational Trust that preserves oil revenues for future generations. It’s led the Dutch to reform their pensions without overly burdening today’s and tomorrow’s Dutch children. And it’s influenced generational policymaking in countries as near as Canada and as far away as New Zealand. In contrast, the U.S. continues to let official debt determine its generational policy.

Fortunately, Senators Tim Kaine, D-Va., and John Thune, R-S.D., introduced in late July a bill called “The Inform Act,” which I helped draft together with Alan Auerbach of the University of California at Berkeley. (If the link doesn’t work, you can go to www.theinformact.org.) The bill would compel the Government Accountability Office (GAO) and CBO to do fiscal gap and generational accounting on an annual basis and, upon the request of Congress, for major new fiscal initiatives. Senators Chris Coons, D-Del., and Rob Portman, R-Ohio, are co-sponsors of the bill.

Getting 11 economists, let alone 11 Nobel laureates, to agree on anything is no small feat. But these economists, who lean to both sides of the political spectrum, are economists first and political economists second. They realize that our country is facing a grave long-term fiscal crisis, that we have been using accounting not even worthy of Enron or Bernie Madoff to describe our fiscal stance, that fiscal gap and generational accounting is long overdue, and that the welfare of our children hangs to a large extent on passage of the INFORM Act.

Other prominent former policymakers, leading economists, business leaders and social activists are beginning to endorse the bill, which is being pushed by The Can Kicks Back, the outreach partner for the millenial generation of the Fix the Debt campaign that former Clinton White House Chief of Staff Erskine Bowles and former Sen. Alan Simpson, R-Wyo., co-founded.

Former Secretary of State George Shultz, who also served as secretary of the treasury, director of the Office of Management and Budget and secretary of labor, leads the list. I met with him a few days back to discuss the bill. Secretary Shultz, who is incredibly spry, physically and mentally, at 92, virtually leapt at the opportunity to publicly support the bill. Our country doesn’t have a lot of elder statesmen to guide us. But this tough ex-marine knows our country is broke, knows our children are threatened, and knows we’ve been hiding the truth.