A number of government entities launched policies and programs designed to deal with the critical economic problems arising from the financial crisis of 2008, the housing market collapse and the Great Recession. The Federal Reserve maintained a low-interest rate monetary policy in an effort to spur growth and help the housing industry while Congress passed the American Recovery and Reinvestment Act of 2009 among other stabilization and stimulus programs. What were the effects of such programs?

In “Mortgage Refinancing, Consumer Spending, and Competition: Evidence from the Home Affordable Refinancing Program” (NBER Working Paper No. 21512), Sumit Agarwal, Gene Amromin, Souphala Chomsisengphet,Tomasz Piskorski, Amit Seru and Vincent Yao examine the nation’s largest housing recovery initiative, the Home Affordable Refinancing Program (HARP). They find that it spurred substantial mortgage refinancing activity and freed up resources for households to spend on other items. But they also find that the HARP participation rate and additional consumer spending didn’t reach their full potential, partly due to impediments to competition within the refinancing market that hampered many borrowers from benefiting fully from the program. 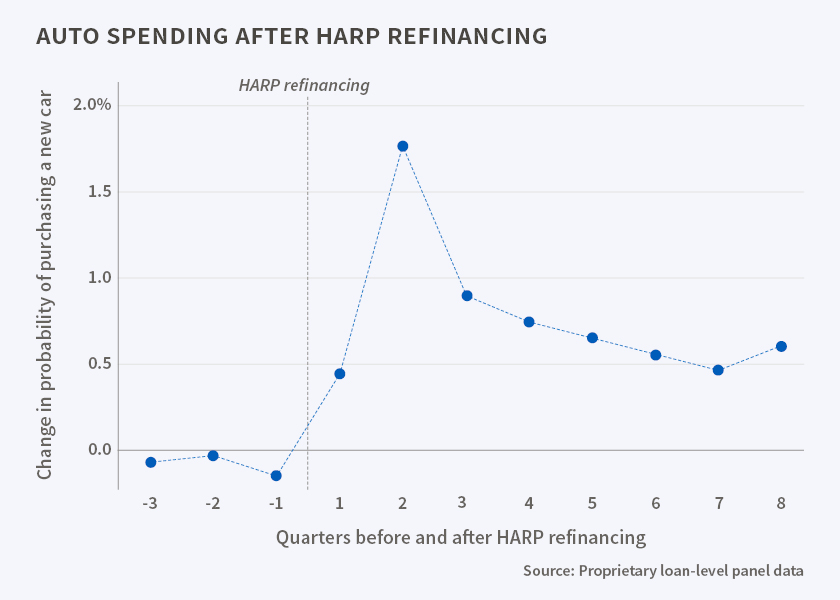 Started in early 2009 by the U.S. Treasury and the Federal Housing Finance Agency, HARP focused on assisting millions of “underwater” American households whose mortgages, issued with help of government-sponsored entities, exceeded the value of their homes, particularly those with especially high loan-to-value ratios. HARP was designed to provide federal credit guarantees to borrowers with insufficient credit to refinance their loans, thereby helping them take advantage of the Fed’s low interest rate policy.

HARP began in fits and starts. It serviced a relatively small number of borrowers in its early years and required constant rule revisions to make it more viable, including periodic increases in the loan-to-value eligibility rate. The researchers reviewed millions of mortgage records of both HARP and non-HARP borrowers and tracked the borrowing and spending patterns of the mortgagors. To analyze and compare HARP’s impact, they divided the households in the data set into two categories — those with loan guarantees from government-sponsored entities and those whose loans were not government-backed.

The researchers found a large difference in refinancing activity between the two groups of borrowers. HARP took off, while the private refinancing market remained relatively frozen in the immediate post-crash years. Indeed, more than three million eligible borrowers, primarily with fixed-rate mortgages, refinanced at lower interest rates through HARP.

On average, borrowers saw a reduction of about 140 basis points in their interest rate as a result of HARP refinancing. That averaged out to about $3,500 in annual savings per borrower. The researchers found that many of these HARP participants subsequently increased purchases of durable goods, such as autos, and also increased spending on other items and on services. These effects were particularly evident in regions that were hardest hit by the housing-market contraction and therefore more exposed to the HARP program. These regions also saw declines in foreclosure rates and faster recoveries in house prices after HARP become operational.

But the researchers also found that competitive frictions in the refinancing market — among both incumbent loan servicers and new servicers — may have hampered the HARP program’s overall impact. They estimate that these frictions reduced the take-up rate among eligible borrowers by between 10 and 20 percent and cut interest rate savings by between 16 and 33 basis points, amounting to $400 to $800 of annual foregone savings per borrower. The largest effects were among the most indebted borrowers; they were the primary target of HARP.

“Our findings suggest that a significant number of eligible borrowers did not take advantage of the program,” the researchers conclude. “While certainly the borrower specific factors or other institutional frictions (e.g., like servicer capacity constraints) may help account for this muted response, our paper finds that limits to competition in [the] refinancing market can also help explain part of this shortfall.”