Does the Fed Feed the Treasury? What’s their Relationship Really Like? 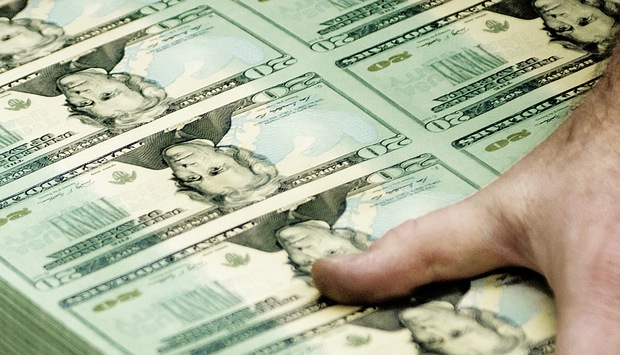 A pressman inspects the roll out of $20 bills at the U.S. Bureau of Engraving in Washington, D.C. The BEP is a government agency within the Department of the Treasury that designs and produces a variety of security products, most notably paper currency for the Federal Reserve. Photo by PAUL J. RICHARDS/AFP/GettyImages.

Question: Can you clarify some questions about the relation between the Federal Reserve and the Treasury? Is it true, as I have read, that the Fed “loans” currency to the Treasury? Can the Treasury borrow money, directly or indirectly, from the Fed? And since the Fed can create money credits “ex nihilo”, isn’t this a source of “funny money” and inflation?

Paul Solman: The Treasury and only the Treasury mints currency. The Fed creates “Federal Reserves” — electronic money — with which it buys loans held by financial institutions like banks, thus supposedly injecting those reserves into the economy. They are as good as currency, and are counted as such on the books of the institutions.

The loans the Fed holds are traditionally “Treasuries” — the bonds, bills and notes that the Treasury issues when it borrows money. So yes, the Treasury is the borrower and the Fed, the lender, however indirectly.

FOM$* Terry Burnham is among those who think this foolhardy — that the Fed might as well lend money to the Treasury without having to pay the middlemen on Wall Street.

As to “ex nihilo” and “funny money,” I take it you think there’s something wrong with the Fed creating money. But of course this would apply to the Treasury as well. Those dollar bills in your wallet are “ex nihilo” — created from nothing. Even those coins in your pocket, assuming you still carry any, aren’t worth the metal were they melted down.

Say it ain’t so, Joe, but if you’re another of the “hard money” champions who make so much noise on the web these days, and have misunderstood the basics of monetary economics since the dawn of civilization, my consolation is that you give me another opportunity to point out that a substance like gold or silver or whatever form you think money should take is no less “funny” than every other form of money, save perhaps stuff you can actually consume. (But then it doesn’t work very well as money, does it?)

Inflation is not a bad thing. It’s been happening since the dawn of currency and the world economy has grown apace the whole while because it helps grease the wheels of commerce. Of course you can create too much money. That’s hyperinflation.
But you can also create too little, thereby throttling trade. To talk blithely about “funny money” runs the risk of talking irresponsibly.

As usual, look for a second post here on Making Sen$e early this afternoon. And please don’t blame us if events or technology overtake us. This entry is cross-posted on the Rundown– NewsHour’s blog of news and insight.