How the housing crisis boxed in some job seekers

The housing crash of 2007 and 2008 devastated many homeowners who suddenly found themselves facing an array of woes, from owning homes no longer worth the purchase prices to keeping up with mortgage payments amidst one of the worst recessions in generations. In “Locked in by Leverage: Job Search During the Housing Crisis,” Jennifer Brown and David A. Matsa find that being underwater on a mortgage in a distressed housing market impeded the job searches of these homeowners by reducing their mobility. Constraining their job searches reduced mobility, likely damaging their long-term compensation and career prospects.

Housing market downturns can devastate homeowners’ overall wealth, and lower housing values can actually “lock in” owners who can’t sell their homes with negative equity, forcing them to remain in their homes and limiting their mobility to buy homes and find work elsewhere. But little is known about how a housing bust specifically affects the labor supply, largely because it’s difficult to separate effects on the labor supply and on labor demand.

These researchers studied the crash’s effect on job searches. With data from a large online job search platform, they analyzed more than 4 million applications to 60,000 online job postings in the financial services sector between May 2008 and December 2009. The data encompassed a rich array of jobs, including posts for bank tellers, administrative assistants, software engineers, account executives and financial advisers. The postings were spread across all 50 states, 12,157 ZIP codes and more than 700 commuting zones.

The researchers matched information from the job search platform to housing market data. Monthly estimates of home values and borrowing were drawn from Zillow and CoreLogic’s Loan-Level Market Analytics, while labor market data came from the U.S. Bureau of Labor Statistics and the U.S. Census Bureau. 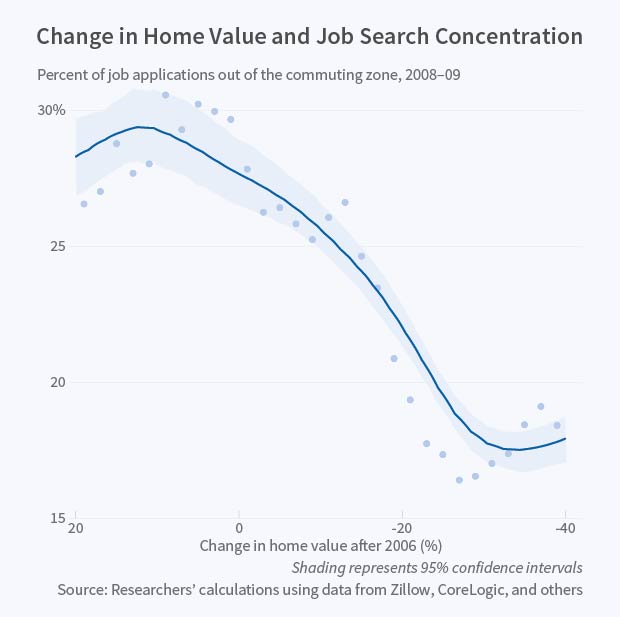 Home value declines and the presence of negative equity led job seekers in depressed housing markets to apply for fewer jobs that required relocation. A 30 percent decline in home values led to a 15 percent decline in applications for jobs outside of the job seeker’s commuting zone.

When job searchers were constrained geographically due to the “lock in” effect of lower home values, they were more likely to apply for lower-level and lower-paying positions within their commuting zone.

When job searchers were constrained geographically due to the “lock in” effect of lower home values, they were more likely to apply for lower-level and lower-paying positions within their commuting zone.

This constrained search pattern was particularly pronounced in distressed housing markets with recourse mortgages, which allow lenders to go after a defaulting homeowner’s other assets. The researchers found clear job-search differences in border areas in which one state allowed recourse mortgages and the other did not.

From the standpoint of firms, the constrained search of some prospective workers had two effects. Firms had reduced access to a national labor market if millions of Americans couldn’t or wouldn’t relocate due to housing value concerns. At the same time, firms within distressed housing markets faced less competition for labor and benefited by being able to hire well-qualified workers at lower salaries than they might otherwise have had to offer.

The researchers conclude that the housing market has important effects on the labor market, as “workers who accept positions below their skill or experience levels forego opportunities to build their human capital.” They note that those forced to seek lower-level jobs than they would typically consider could also crowd out other workers, who in turn suffer, creating a far-reaching labor market ripple effect “even if housing market constraints are short-lived.”