How much does it cost to leave the workforce to care for a child? A lot more than you think.

Two out of every three American children under the age of 5 whose parents both live together need child care because both parents work. What’s the average cost for two kids — an infant and a 4-year-old — in a child care center? $18,000 a year… almost 30 percent of families’ net income, according to the Organization for Economic Cooperation and Development.

For some parents, it seems to make sense to leave the workforce for a few years to fill that gap. But economically, what is the cost?

Three years ago, economist Mike Madowitz of the left-leaning Center for American Progress searched for that answer. He and his wife had decided that they were going to have a child, and economist that he is, it seemed like an obvious question. But he couldn’t find any economic literature or an existing tool to determine the overall costs. And two years later, when the couple decided to have another kid, still zilch.

READ MORE: Almost every country in the world offers more generous maternity leave than the U.S.

It’s usually assumed that the loss from leaving the workforce is your current salary multiplied by the number of years you take off. So, say, a salary of $50,000 times three years for a total of $150,000. But this assessment doesn’t include potential wage growth or lost retirement savings and benefits over time.

A 26-year-old woman who’s making $50,000 when she takes three years off of work to attend to a child would leave not just $150,000 in lost wages on the table, but an additional $200,000 in lost wage growth — the cumulative effect of time off on future earnings — and some $165,000 in lost retirement assets and benefits. (The $165,000 includes missed 401K contributions and their assumed growth as well as reduced Social Security benefits.) That’s a potential life income loss of $514,073 — assuming taking Social Security at age 65 and investing 5 percent of income in a 401K with an employer match. These factors can be adjusted on the calculator as well. (You can read more about the methodology for the calculator here.) 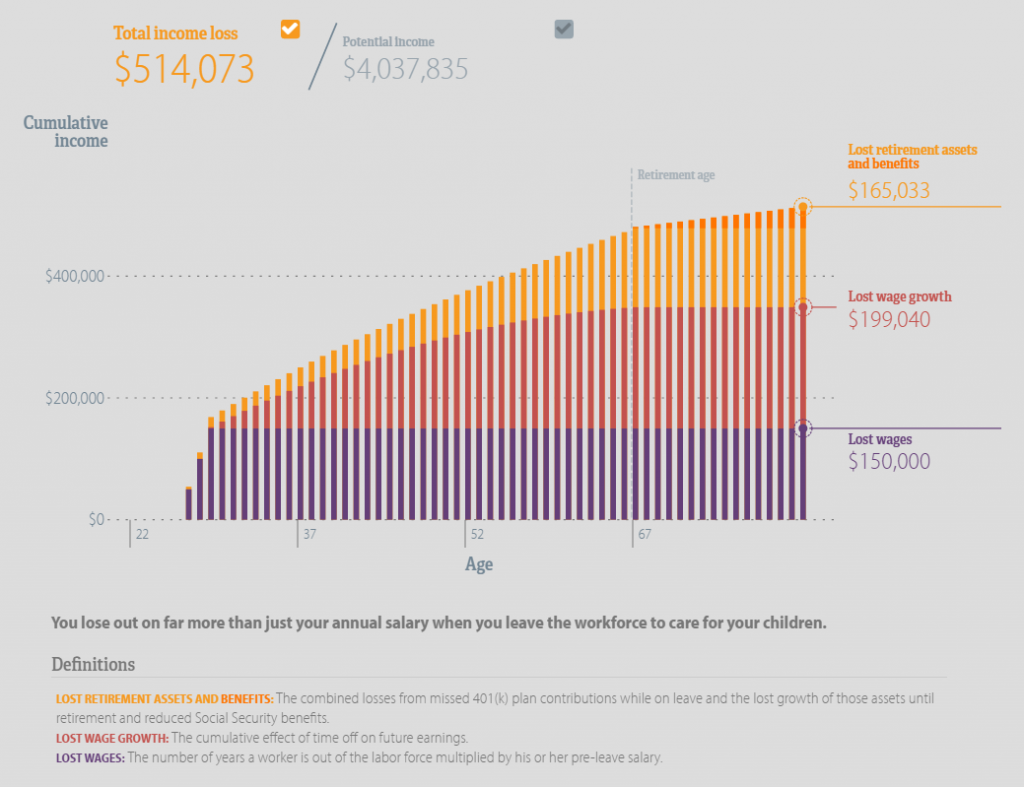 This material was published by the Center for American Progress.

Not only has the calculator answered Madowitz’s question — the couple decided that economically it made more sense for them to keep working — the tool has pushed forward a policy position he’s been talking about for years.

“I’m a policy economist, and people are always coming to me with questions like, ‘How do we get people to earn higher wages and get more financial stability?’ And I always say child care, and people look at me funny.”

The U.S. spends far less — about 1.2 percent of GDP — on family benefits such as child care than the OECD average of 2.6 percent.

It’s a policy position also being pushed forward by the OECD, which last week released its report on the state of the U.S. economy. The report noted that the U.S. spends far less — about 1.2 percent of GDP — on family benefits such as child care than the OECD average of 2.6 percent. Women’s opportunities could improve further, it suggested, by requiring paid leave and expanding child care and preschool. Doing so would help more women stay in the workforce, which could close the gender gap in the labor force participation rate by 2040 and increase GDP per capita by $4,300.

READ MORE: How Paid Parental Leave Helps You, Your Newborn and the Job Market

As we often report in our monthly jobs report roundup, economists often blame our historically low labor force participation rate for slack in the market and stagnant wages.

A temporary leave will cause wages to stagnate — and the earlier the leave, the greater the hit, said Madowitz. Wages typically increase in one’s 20s and 30s, eventually plateauing in one’s 40s before declining. Labor economist Teresa Ghilarducci recently brought to our attention a Federal Reserve study that showed, contrary to popular belief, that wages stop increasing at about the age of 45.

“It’s a purely mathematical model, so it’s going to tell you that delaying to have kids is going to be cheaper,” said Madowitz, which he added, “is the opposite of how fertility works.”

Simply put, many women can’t wait until their 40s or later when their wage growth has plateaued to have kids.

It’s worth noting here the pay gap research of Michelle Budig, a sociology professor at the University of Massachusetts, Amherst. Budig found that among parents who keep working, women were penalized for having a kid — 4 percent for each child they have — while men are rewarded with a pay bump of 6 percent.

Still, the calculator shows that it’s more economical in lifetime costs for mothers (and fathers) to continue working in the labor force. And obviously, the economic answer may not be the right decision for everyone.

“I don’t really expect everyone to think about child care the way that economists do,” said Madowitz. “We’re a little weird, and I’m OK with that.”

But he added, “We’ll still see lots of parents who can’t afford to work even if they prefered to.” For many low-income households, quality child care is out of reach financially, even though not working is more costly in the long run.

Update: On this evening’s PBS NewsHour, Judy Woodruff interviewed International Monetary Fund managing director Christine Lagarde, who pointed to maternity leave and child care support as two polices that can increase the labor force participation, thus aiding the economy and the middle class. Read the excerpt below, and watch the full interview here.

Christine Lagarde: What we are seeing is something that affects us all, which is aging.

The U.S. population is aging, like in other economies of the world, and, as a result, the participation of active workers in the economy is declining. Now, we cannot stop the course of time, but what policies can do is encourage people who are not joining the workplace, the job market, to actually do so.

And I would point to a couple of policies. One is support given to women. And, by that, I mean maternity leave policy that would help them face the decision of, do I stay or do I go? Second, child care support, and not just child actually, but the kind of support that would help families look after a child or look after an elderly, because, with aging, we will have to support more parents or grandparents.

Left: A new calculator from the left-leaning Center for American Progress allows expecting parents to see how much it would cost to leave the labor force to take care of a child. Photo by Jonathan Ernst/Reuters