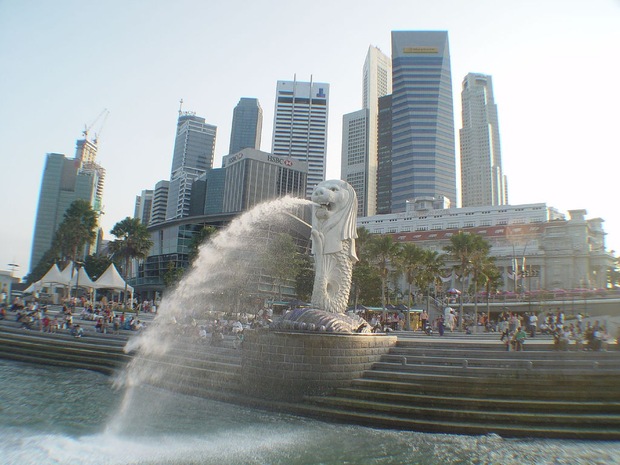 Singapore is such a wealthy, clean and peaceful city-state, in part, because of government incentives and disincentives to encourage and discourage certain behaviors. Photo courtesy of Flickr user Peter Garnhum via Creative Commons.

Paul Solman: Financial education guru Lew Mandell, author of “What to Do When I Get Stupid: A Radically Safe Approach to a Difficult Financial Era,” has written here recently on getting an 8.3 percent return on investment in retirement via annuities and how to plan for the future once your financial savvy peaks at age 53.

Right now, he’s doing a teaching stint in Singapore. Long interested in that city-state, I asked him to be one of our far-flung correspondents and file a dispatch on its textbook economic strategy: running the state through incentives. Here’s his report.

Lew Mandell: For the past couple of weeks, I have been teaching my annual course in microeconomics in Singapore, a country whose remarkable growth owes a lot to the theory of incentives embedded in my course.

An independent country only since 1965, Singapore is now one of the wealthiest countries in the world in terms of per capita income. Visitors agree that it may be the cleanest and safest country, with remarkable racial harmony and city streets that can be driven at rush hour without the gridlock that you see in most of the rest of the world.

Recommendation No. 1 for a Secure Retirement: “Age in Place”

The leaders of Singapore, whose cabinet members, incidentally, are paid more than $1.3 million (U.S. dollars) per year to discourage corruption, grapple continuously with the same set of social problems found in every other country. However, they handle these problems in a totally different way: through precisely described incentives and disincentives.

A visitor’s first inkling of this policy begins when he or she fills out the entry visa card. There, in bold red letters, we are told that the penalty for selling drugs in Singapore is death. Laws here are clearly stated with penalties for breaking them precisely described. As you enter each remarkably clean subway station, you are warned that the penalty for eating or drinking is $500, the penalty for smoking is $1,000 and the penalty for taking flammable liquid or gas onto the subway is $5,000.

Penalties for crimes against people, particularly abuse of children, may still include caning. Specifications include the rattan cane which is 1.2 meters long and 13 millimeters thick. The maximum number of strokes is 24, and there’s mandatory protection for the kidney area. While not necessarily consistent with American tastes, caning is generally accompanied with shorter prison terms, which saves money for the government. It may also be a better deterrent.

Long ago, the nation’s founders searched for a way to encourage racial harmony among its citizens, who are largely of Chinese, Malay and Indian origin. They decided that children who grew up and played together were unlikely to exhibit racial bias as adults. To that end, they racially-apportioned all government-subsidized housing, which is pretty much the only housing that most Singaporeans can afford.

If ethnically Chinese Singaporeans constituted 70 percent of the population, 70 percent of the apartments in every building would be sold to them. The same would be true for the Malays and the Indians. To keep this racial diversity of apartment buildings in effect, apartments could be sold only to a family with a homogeneous racial background. As a result, I have seen schoolgirls in their bright uniforms walking down the street arm in arm, the bareheaded girls of Chinese and Indian descent holding dearly to their Islamic Malay friends whose heads would be covered.

Incentives also prevent traffic jams. First, the number of cars allowed in Singapore is strictly limited and can grow only with the growth of new road capacity, which is about 1.5 percent per year. One can only drive a car if it has a certificate of entitlement (COE). Since there are many more people who want cars than there are COEs, the price of the certificates is determined strictly by supply and demand. One must bid for a COE, and recently the price has surpassed about $75,000 (USD). Add to that a large customs duty and registration fee, and a small economy car will cost well over $100,000 while a larger car (which has a separate bidding pool) will cost much more.

To further prevent traffic congestion in the city center, every car must carry a transponder that records when it crosses an Electronic Road Pricing (ERP) gantry. As a driver gets closer to the center of the city, the cost of crossing the gantry goes up. It also goes up during rush hour so that a driver who commutes into the city center during rush hour can pay as much as $15 each way. Prices are continually adjusted as congestion occurs in different parts of the city. Compare this refined way of controlling traffic congestion with the simple fee proposed by New York City Mayor Michael Bloomberg, which Albany rejected, resulting in near-perpetual rush hour gridlock in downtown Manhattan.

After resisting gambling for many years, Singapore decided to allow the construction of two massive casinos to encourage tourism. However, it did not want to create the social problems that legalized gaming would pose to its citizens. As a result, Singaporeans must pay $100 just to enter one of their own casinos, while those with foreign passports (myself included) get in for free.

Since its inception, Singapore has been dealing with population growth. However, the early concerns of too many children have been drastically reversed, and it is now concerned with too few children and an aging population. Following independence in 1965, Singapore averaged six children per woman. To keep the geographically tiny nation from being overpopulated, they instituted decentives to having children from 1969 to 1972. No maternity leave was given after the second child and hospital fees went up for the third and subsequent deliveries. In addition, tax deductions were limited to just the first two children. Finally, in a country that worships education, the government gave top priority for school registration only to children whose parents underwent voluntary sterilization before age 40. Partially as a result, total population growth dropped to zero by 1986.

Unfortunately for Singapore, the fertility rate kept falling to the point where women, on average, give birth to only 1.25 children, well below the replacement rate and one of the lowest fertility rates in the world. The campaign “stop at two” was replaced by “have three or more if you can afford it.” Married couples are now given housing priority, and there is a “baby bonus” ranging from $3,000 to $18,000 per child, plus tax rebates of $10,000 to $20,000, depending on the number of children. Tax rates have also been cut for working moms and there is now government subsidized child care. Finally, in contrast to the U.S., where dating employees and coworkers is often discouraged, the government of Singapore encourages such behavior as a means of increasing marriage and procreation.

Disincentives have also crept into health promotion. A pack of cigarettes costs well over $10 in Singapore and each pack is covered with a different gruesome photo of a smoking-related deformity. Singapore was well ahead of the U.S. in this type of smoking disincentive.

In spite of its brilliant use of incentives to promote social welfare, Singapore is not without its problems. Perhaps the most serious threat to the continued economic success of Singapore may be from a recent, marked departure from the rules of microeconomics.

In response to a growing income gap between the many less-well-educated Singaporeans and the highly-skilled foreign workers who are well-paid in the country, the increasingly democratic government has begun to yield to populist pressure to greatly limit foreign workers. Even more so than the U.S., Singapore has benefited from the highly-educated, creative and hard-working expats who drive much of its economic growth.

By subverting the laws of supply and demand and deliberately not allowing the most talented workers to be hired at the going wage, Singapore may be relegating its miraculous growth to the past.