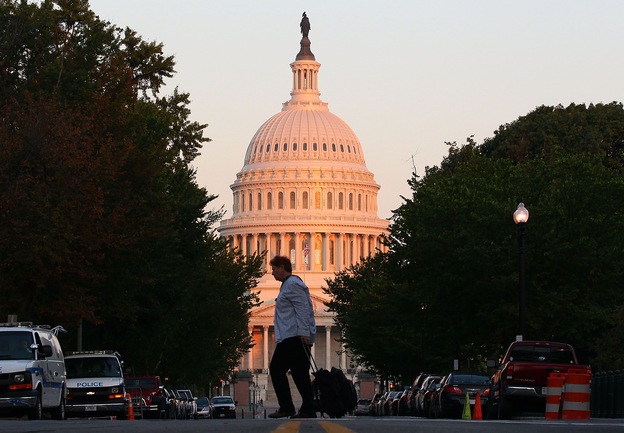 The government should be budgeting for infinity, Social Security expert Larry Kotlikoff argues, if Social Security is to remain solvent. Photo courtesy of Mark Wilson/Getty Images.

Larry Kotlikoff’s Social Security original 34 “secrets”, his additional secrets, his Social Security “mistakes” and his Social Security gotchas have prompted so many of you to write in that we now feature “Ask Larry” every Monday. We are determined to continue it until the queries stop or we run through the particular problems of all 78 million Baby Boomers, whichever comes first. Kotlikoff’s state-of-the-art retirement software is available here, for free, in its “basic” version

Tom Harris — Austin, Texas: My wife died, and I started taking survivor benefits at 62. I am now 66. Should I start collecting my own benefits, which would be higher, now? Someone said if I wait until age 67, I would get more than at age 66. Is that true?

Larry Kotlikoff: Yes, you get about 7 to 8 percent more every year that you wait. But to start collecting the maximum possible benefit for the rest of your life, you should wait until 70. It will then be 32 percent larger than if you take it now, and 7 to 8 percent larger than if you take it at 69. Suppose you live until age 99? Suppose you need elder care? Social Security is best thought of as old age insurance to be used as protection against outliving your savings.

Also — and this is critical in your case — if you take you own benefit now, you will eliminate your survivor benefit. As discussed in my column “Three Rules for How to Get the Highest Social Security Benefits,” the way to maximize your lifetime benefits is to let one benefit grow while taking whatever else is available for as long as possible.

Larry Kotlikoff: If you can swing it, money-wise, you should suspend your retirement benefit at 66 and start it up at 70, when it will be 32 percent larger, as I explain in my first answer this week. That’s provided, however — and readers of this column must never forget — that if you’re already taking Medicare Part B, you should pay your premiums out of pocket.

As to Social Security’s longevity, yes, it will be around in five-plus years. A 40,000-person strong American Association of Retired Persons (AARP) is on notice to protect it, if needed by attacking congressmen with their canes. Recall the attack on House Ways and Means Committee Chairman Dan Rostenkowski, D-Ill., in 1989, when he dared to propose that oldsters contribute to their own catastrophic care insurance.

But when you question the solvency of Social Security over the long run, you certainly make a good point — a point I, as an economist, have been reiterating in these columns, including one on what I consider the real problem with Harvard professors Carmen Reinhart and Kenneth Rogoff’s research relating real economic variables to the amount of government debt.

In another column, I exposed the fiscal cliff for the generational con job I think it was. In yet another, I returned to one of my favorite (or, really, least favorite) themes: the fiscal war on our children. And then there was the Making Sen$e Business Desk column laying bare the full extent of New York Times columnist Paul Krugman’s fiscal folly.

Economic theory makes strikingly clear the dire long-term state of Social Security. But even economists who understand how far out we need to budget — and there are precious few of them — don’t like to make public what our theory says, for two reasons. First, it’s not an answer people easily comprehend. Second, it’s not an answer that politicians, whose attention most economists secretly crave, want to hear.

The answer is: governments need to budget out to infinity. And that leads to a very grim view of Social Security’s finances not for you, Mr. Wimer, but for your children and grandchildren, their grandchildren and so on.

Just as it says, “present value” stands for the value of something right now — in the present. And the value right now of getting one dollar in the future is smaller the longer you have to wait for it. The reason is simple. You can put aside less than a dollar today, earn interest on that saving, and end up with a dollar in the future. If you can invest at 3 percent, you only need to put aside 41 cents today to end up with one dollar in 30 years. So 41 cents is what one dollar in 30 years is worth today.

The fact that economics tell us to discount — as in make less of — each dollar owed or received in the distant future, however, doesn’t mean a government can ignore those obligations and receipts, especially if there are loads of future obligations relative to receipts.

Take the just-released 2013 Trustees Report on Social Security’s long-run finances. Table IVB6 shows an infinite horizon fiscal gap of $23.1 trillion separating the Social Security system’s projected costs and taxes after taking into account the several trillion in the Social Security trust fund. To give you a sense of how massive this shortfall is — and it grew by fully 8 percent last year alone — it is 50 percent larger than U.S. GDP and almost twice the size of total federal debt held by the public.

Table IVB6 also reports Social Security’s fiscal gap over the next 75 years. It’s much smaller — only $9.6 trillion, and that’s the number people tend to use in discussion. But that number is only 41 percent of the actual economic gap: $23.1 trillion. Thus, the 75-year fiscal gap hides three fifths of the system’s true long-term shortfall.

President Obama keeps telling us that Social Security just needs to be tweaked. He should take a look at Table IVB6, and so should the press, which, as it does every year, has completely ignored this true and truly terrible assessment of the system’s financial status.

Some people will, no doubt, view paying 4 cents more per dollar earned as no big deal. Paul Solman, the proprietor of the Making Sen$e Business Desk, is one of these people. But let me publicly remind him that A) at age 68, he’s close to retirement (well, within 20 years anyway), and B) he should think of those far from retirement, like his grandkids. Should they be asked to pay another four pennies of every 100 pennies they earn over their entire lives to keep the elderly’s Social Security benefits unchanged for everyone, including those like Paul and Warren Buffett? That doesn’t quite meet the sniff test.

Social Security began reporting its infinite horizon fiscal gap in 2003. Back then it totaled only $10.5 trillion. On an inflation-adjusted basis, the gap has risen 74 percent since then, leaving the system in far worse shape than back in 1983, when the Greenspan Commission supposedly “fixed” it.

But the Greenspan Commission, like the current trustees, looked out only 75 years. In so doing, it ignored not just the 30 years between 2057 and 2087 that have since moved up into the 75-year window, but all the years after 2087 as well, when most of today’s and tomorrow’s children will still be alive.

Ignoring the distant future when our kids’ welfare is at stake is morally repugnant. But it’s also forbidden by economic theory, and here’s why.

Economic theory doesn’t tell us whether any given dollar the government takes from us should be called “taxes” or “borrowing.” Theoretically and practically speaking, it’s not a meaningful distinction. If the United States runs an implicit deficit in terms of its future obligations, as Social Security has been running, it’s going to have to make the deficit up eventually by collecting taxes.

Nor does economics distinguish between calling any given dollar that the government hands back to us a “transfer payment,” as we usually think of Social Security benefits, or “repayment of principal plus interest,” as if the government were making good on an IOU to its citizens.

Economics is about real policy, not the language used to describe policy. But the government’s choice of words, not its actual fiscal deeds, will dictate its cash flow projections and the fiscal gap it reports over any finite budgeting horizon, be it the 10-year horizon Congress uses or the 75-year horizon the Social Security Trustees favor. That’s why an economist like me insists that it should use an infinite time horizon.

And, by contrast, that’s why Social Security’s $23.1 trillion fiscal gap over an infinite horizon is kept off the books: It sounds better, to politicians, to talk about 75-year obligations for the simple reason that their total is lower. And because, if you call FICA contributions “payroll taxes” rather than “paying future debts,” you don’t raise the question: “Just how large are those future debts?”

In short, then, limiting Social Security’s gap to 75 years is not justified by economic theory. It can be any size anyone wants to report. So 10-year, 25-year, 50-year and 75-year fiscal gaps literally have no economic meaning because they measure our labels, not our policy.