By Robert Lerman and Nicholas Wyman 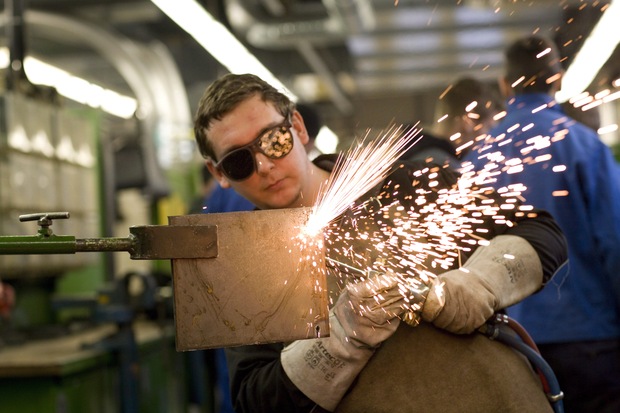 Economist Bob Lerman and apprenticeship expert Nicholas Wyman write that apprenticeships, long popular in Germany, may be taking off in South Carolina. Photo by Ulrich Baumgarten via Getty Images.

Paul Solman: Bob Lerman began life on the NewsHour as a gadfly, contesting the data of Dan Ariely, among others, that US wealth distribution is scarily skewed. It’s not nearly so lopsided, argued Lerman,, if you take into account the implicit “wealth” that Social Security and Medicare represent.

That said, Lerman, a centrist economist with the Urban Institute and American University, worries plenty about the problems of those who have been falling behind economically in America, especially our non-advantaged youth. And he has a favorite policy initiative to address them: apprenticeship.

He’s written about it here before in a popular post entitled The Youth Unemployment Crisis: A Fix that Works and Pays for Itself and again more recently.

The latest post got the attention of, among others, the President and CEO of Siemens USA, who has just written about it on LinkedIn.

In timely fashion, Bob just happened to have sent us another post, written with Australian apprenticeship expert Nicholas Wyman — about the unlikely state that seems to be putting ideas like his into practice: South Carolina. Here it is.

Robert Lerman and Nicholas Wyman: President Obama is embarking on a bus tour today to explain his plan to make college more affordable . Unfortunately, his near exclusive focus on college leaves little room for apprenticeships and other pathways to rewarding careers that are more cost-effective for millions of young people.

We’ve written recently about two related problems: high youth unemployment and a scarcity of skilled labor. While two out of every five young adults have no job at all, executives complain of the labor market being short of machinists, computer numerical controllers, electricians, welders, healthcare technicians and dozens of other categories of middle-skilled people.

The middle-skills gap has two main sources: (1) a general neglect of vocational education and (2) an unexamined notion that everyone should go to college, often interpreted as pursuing a baccalaureate degree. College-for-everyone is not only costly for families and taxpayers but also weakens the career prospects of young people who prefer learning by doing over sitting in classes all week. If there is one piece of conventional wisdom that needs debunking, this is it!

Are College and Career Skills Really the Same?

The good news is that we are seeing isolated cases where people are doing something about both problems. In New York City, for example, ‘P-Tech’ school, a collaboration involving IBM, the City’s Education Department and CUNY, is providing a STEM oriented, grades 9-to-14 curriculum with work-based learning that leads to a high school diploma and an associates degree. P-Tech’s aim is to turn out graduates with the skills they need to step directly into solid, good paying technical jobs–or to go on the higher learning with great confidence of success.

We find even more encouraging signs in South Carolina where educators, employers, and government are working together to close the skills gap and create opportunity for young people on a broader scale. They are accomplishing this through greater attention to high school career and technical education, a first-rate system of state technical colleges, and a well-managed effort to increase the number of apprenticeship positions.

An exemplary case of this collaboration can be found in rural Pickens County, which Nicholas visited recently. Pickens County is within eyeball distance of the Blue Ridge Mountains. It’s part of Appalachia, where the shuttering of cotton mills and textile plants has left many people’s incomes and expectations fairly low (and they were none too high to begin with). Yet the county’s K-12 school system is confidently preparing young people for decent careers. It begins in grammar school where children receive hands-on experience with STEM concepts and problem solving. It continues at the district’s state-of-the-art Career & Technical Center, where vocationally-oriented high school students have access to industry-experienced teachers and to the machine tools, computers, robotic systems, and other equipment they will encounter in the most modern workplaces. School leaders and teachers have also overturned the long-standing perception of parents and students that the Career & Tech Center is for low-achievers. Entry to the Center’s ‘Technician Scholar’ program is by application only; kids with low GPAs and bad attitudes need not apply. It’s now cool to be a “Scholar Technician.”

The most encouraging aspect of the district’s system is the extent to which its leaders have eliminated the usual boundaries between schools and area employers. Local CEOs work with the district superintendent on the big issues facing the local economy and the community; company managers and technicians are regular visitors to school classrooms and workshops where they work with teachers and mentor promising students. And this year teachers–many of whom have never worked in an office, hospital, or manufacturing environment–will spend part of their time in those settings, learning about the opportunities those enterprises have to offer, and about the knowledge and skills their students will need to capture them.

Pickens County is showing us what can be done to raise young people’s expectations and prepare them for the school-to-work transition. The ‘secret sauce’ here is collaboration and a high level of trust between educators, employers, and government. The state government’s part is Apprenticeship Carolina (AC), which works with local employers to increase the number of junior and adult apprentice positions in manufacturing, technology, healthcare, and other industries. AC reps explain the benefits of apprenticeships to employers, handle all the paperwork, and coordinate the classroom component of apprentice programs with local technical colleges.

The payoff has been remarkable. Since its 2007 launch, AC has increased the number of apprentices in South Carolina six-fold. Nearly 9,000 young people are now either in apprentice positions or have matriculated. The number of sponsoring employers has also exploded from 90 to 604. This progress did not require an army of state personnel or huge taxpayer outlays– and it took place during one of the country’s most dismal economic periods. Credit for this success goes to six talented AC reps, one administrative assistant, and a $1,000 per apprentice per year state tax credit–chump change relative to the program’s return to the South Carolina economy and to the income and sales taxes that 9,000 highly skilled people will pay over their working lives. (Completing an apprenticeship adds an estimated $250,000 to an individual’s lifetime earnings.)

We should all hope that South Carolina’s success will be replicated elsewhere. Perhaps someone should bottle their ‘secret sauce’ and pass it around.

Robert Lerman is Professor of Economics at American University and Institute Fellow at the Urban Institute. Nicholas Wyman is founder of The Institute for Workplace Skills and Innovation (IWSI) in Australia and recently returned from a visit to South Carolina.

This story was first broadcast Feb. 8, 2012. Watch the video above or read a full transcript of the report.