President Donald Trump called last week for prioritizing immigrants coming to the United States for skills-based reasons rather than family ties, a proposal that would shift the values anchoring the nation’s immigration policy and have significant economic ramifications.

Congress seems unlikely to act on the president’s newest plan, which critics argue does not dramatically reshape the legal immigration landscape. But on its own the Trump administration has made a number of changes over the past two years to the nation’s guest worker program — changes that will resonate throughout the U.S. economy.

Government officials are rejecting more high-skilled foreign workers applying for visas and cracking down on immigrants who overstay their visas. At the same time, federal agencies are granting more visas for low-skilled workers in the farming and hospitality sectors.

Immigrants who use guest worker programs represent a relatively small share of the overall labor force, and that was the case even before the Trump administration began making changes to those programs. But guest workers can boost or slow economic growth depending on how many are allowed into the U.S., so the policies around these visas are a critical part of the broader economy.

H-1B visas are given out to fill high-skilled, in-demand jobs in the U.S. Most of the jobs are in the science, engineering and technology sectors. Applicants must have highly specialized knowledge or a bachelor’s degree to qualify for the visas. The U.S. has a quota of 85,000 H-1B visas to be issued each year, but it also gives out tens of thousands of H-1B visas for workers at higher education institutions and government research organizations, which are exempt from the quota.

H-1B visa holders account for a small share of all jobs in the U.S., but make up a larger share — by some estimates as much as 13 percent — of all tech jobs.

During the Trump administration the denial rate for H-1B visas has more than doubled. The federal agency that oversees the process has also been cracking down on companies it perceives to be abusing the program.

In 2017, 13 percent of H-1B petitions for new employment were denied. That number rose to 24 percent in 2018 and 32 percent in the first quarter of 2019, according to U.S. Customs and Immigration Services data that was analyzed by the nonprofit National Foundation for American Policy. 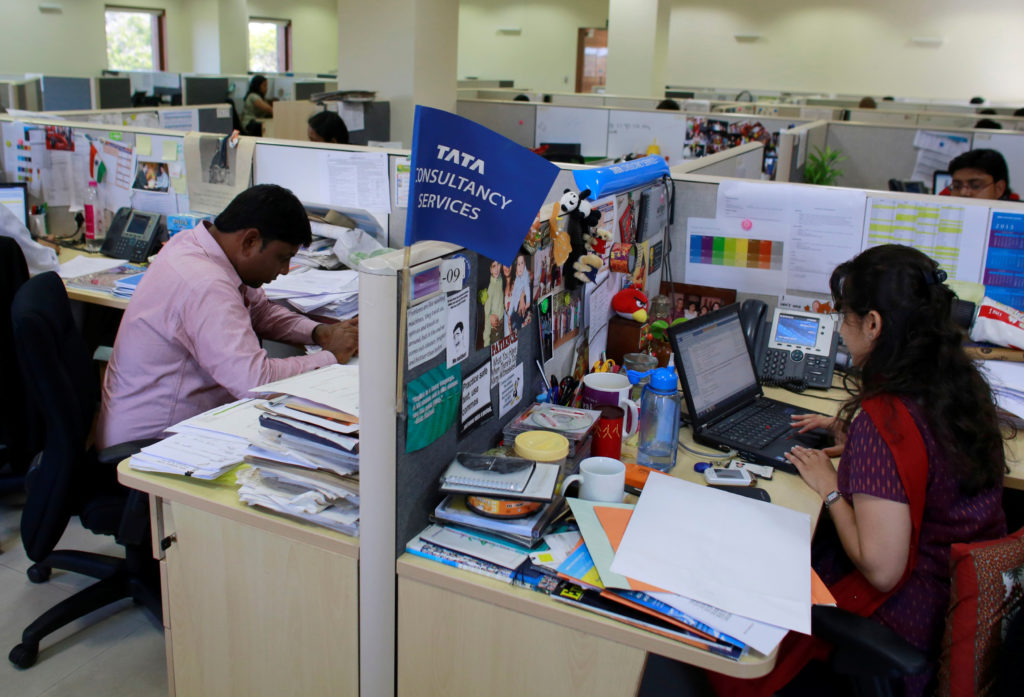 Employees of Tata Consultancy Services (TCS) work inside the company headquarters in Mumbai March 14, 2013. the Trump administration has cracked down on services firms like TCS that sponsor a large number of H-1B visas. Photo by Danish Siddiqui/Reuters

Most of those denials were handed down to companies specializing in IT services that hire H-1B workers and contract them out to other companies. IT services firms have borne the brunt of the scrutiny over H-1B visas in recent years because they tend to pay lower wages, despite the federal requirement that companies pay H-1B workers the same salary as an American in the position.

The government’s approval rate for H-1B visas for those companies dropped from 94 percent in 2016 to 58 percent last year. The rate dropped 6 percent in the same period for non-IT support companies as well, according to the Migration Policy Institute, which analyzed the data.

“It appears the administration has been very smart and targeted about their increased scrutiny,” said Sarah Pierce, a policy analyst for the Migration Policy Institute.

Guest worker programs — and their effect on the economy — have long been controversial. Companies applying for visas must promise not to displace American workers, but there have been instances when businesses laid off workers and replaced them with H-1B visa holders.

Both could be true. Studies have shown companies sometimes pay H-1B visa holders less than American workers, even though the government prohibits it. At the same time, because H-1B visa holders often work in the tech and IT sectors, they are more likely to spur innovation, create more jobs, increase productivity and, in turn, boost wages over the long-term.

“We know that high-skilled immigrants create jobs and are a net benefit to the economy,” said Hanna Siegel, the managing director for the research organization the New American Economy.

Even though most of the scrutiny of H-1B visas has been on IT services firms, other companies are still getting caught in the crossfire.

Difficulty getting visas approved in what is already a highly competitive process could discourage small businesses, such as startups, to sponsor H-1B visa applicants. IT services firms, however, rely so heavily on H-1B visas that they are well-versed in the application process and are less likely to be discouraged by hurdles put in their way. As a result, economists warn IT firms could end up cornering even more of the market– exactly what the Trump administration appears trying to fight.

If the process becomes too burdensome, it could also drive the highest-skilled workers to immigrate to other countries instead of the U.S.

2018 marked a new record for H-2A visas, which are used for seasonal farm workers. More than 196,000 H-2A visas were given out last year, representing a 21 percent increase from the year before and more than double the number allotted just four years ago.

Farmers have been complaining for years of a labor shortage, and it’s expected to get worse.

The work is temporary and is mostly manual labor, which deters some American workers and increases the need for foreign workers.

Farmers have been complaining for years of a labor shortage, and it’s expected to get worse.

In 2017, 91 percent of the visas were issued to Mexicans. But a USDA report released last fall found that, due to the growing urbanization of Mexico, there are also fewer laborers from rural Mexico who are willing to take these jobs. Meanwhile, the number of unauthorized immigrants already in the U.S., who used to take these kinds of jobs because they had few other options, has dropped in recent years, the report said.

The report advocated for expanding the H-2A visa program but said expansion would not solve the shortage. Instead, it encouraged a move away from labor-intensive crops and emphasized the need for more investment in technology that could replace manual labor.

This year Homeland Security is issuing 30,000 more H-2B visas, which go to low-skilled, seasonal or temporary workers outside of the agricultural industry. About 40 percent of H-2B jobs are in landscaping and groundskeeping. Others work in the forestry, hotel, construction, restaurant and seafood industries.

Each year, Congress authorizes an additional number of H-2B visas beyond the 66,000 annual quota. Homeland Security can then decide how many extra visas to give out. 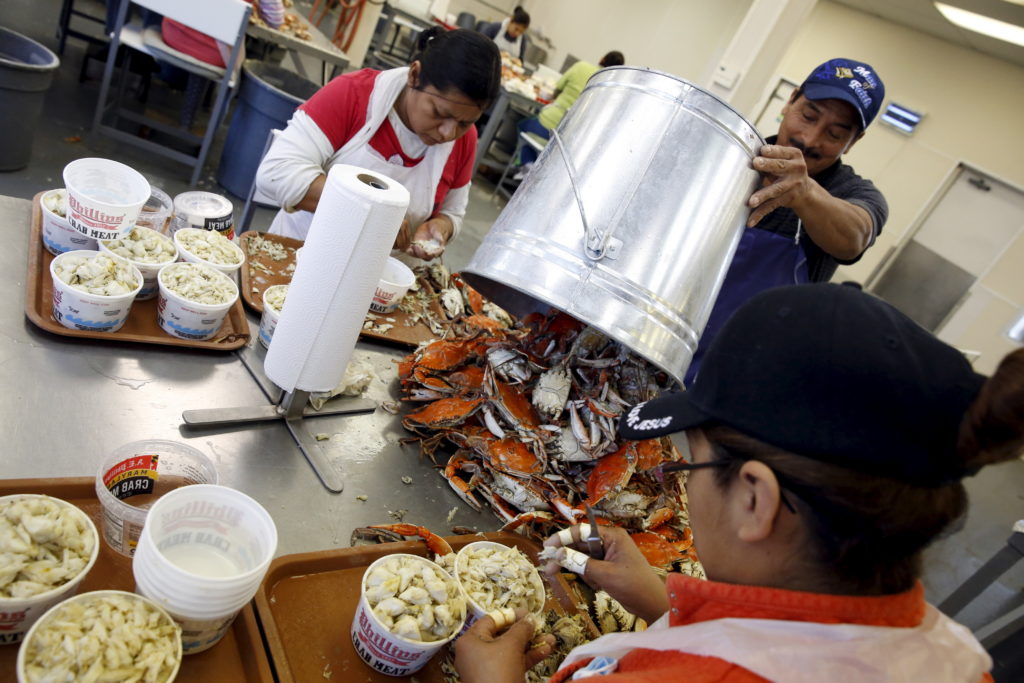 It’s unclear why the administration has chosen to issue more of these visas, but some economists said it can likely be attributed to lobbying efforts and support from key lawmakers such as Senators Susan Collins and Angus King of Maine, a state that relies heavily on seasonal migrant workers for the seafood and summer tourism industries.

Despite Trump’s broader policies aimed at limiting immigration, communities that rely on H-2A visas has managed to “get some wins,” Siegel said.

The increased number of H-2B visas could help companies avoid the crunch they saw last year. In Maryland, for example, the Washington Post reported that about a third of the state’s crab picking jobs were unfilled along the Eastern Shore last summer. As a result, crab companies could not meet customer demand and lost profit.

Even though the visa caps are being expanded, the number of visas available are still relatively small compared to the demand for workers in the U.S. As the average household income in the U.S. rises, there will be more disposable income, and more demand for hotels, restaurants and construction — the kinds of services H-2B visa holders supply.

That could create a “bottleneck” in the U.S. economy, UC Davis economist Giovanni Peri said, and cost a few percentage points in economic growth over several years.

Editor’s note: This story has been updated to clarify that the U.S. gives out additional H-1B visas beyond its quota to workers at higher education institutions and research organizations. It also incorrectly stated that H-1B visas accounted for about .05 percent of the labor market. In fact the share is larger, but estimates vary.

Left: Migrant farmworkers with H-2A visas harvest romaine lettuce in King City, California, on April 17, 2017. The U.S. has given out more H-2A visas in recent years in an attempt to keep up with rising demand and a lower supply of farm workers already in the U.S.. Photo by Lucy Nicholson/Reuters