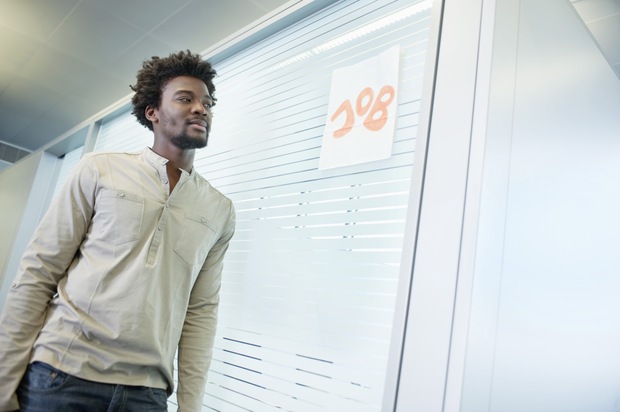 Paul Solman: Northeastern University economist Andrew Sum is featured in our youth joblessness story on the NewsHour Friday. His full picture of the crisis is essential reading, however, and so we share more of my interview with him here. For example, if you are a poor African-American high school teenage dropout, your likelihood of having a job is — 5 percent.

Paul Solman: You have used the term “age twist” to describe today’s job market? What do you mean?

Paul Solman: How does that compare to the historical relationship between age and joblessness?

Andrew Sum: Up until 1995, older workers were retiring more from the labor market so their employment rate was actually declining — from the 1960s — and then, starting in the 1990s, it began to change. The baby boomers were getting older. They had different work behavior and were more likely to stay in the labor market than their predecessors.

Andrew Sum: That’s absolutely right. But among the young, we began to observe the problem after 2001. When the boom ended in 2000, the labor market, like it always does, generated lots of job losses for young people. What was different this time was that when the economy recovered, it generated no net new jobs for teenagers. Then along comes the 2007-2009 Great Recession, and the labor market for young people is destroyed.

Boffo BLS Jobs Data! But — the New Jobs Are Only Part-time

The sad thing is that since the nation began to add jobs in 2009, we’ve created about 5.2 million additional jobs for America’s workers. Teenagers in the aggregate received none of them. Not one.

Paul Solman: So, there are no more jobs for teenagers today than there were when the recovery started in 2009?

Andrew Sum: That’s right. Not one.

Paul Solman: How do you explain that?

Andrew Sum: The labor market is still in a depressed state. Employers are telling us, and showing this in their behavior, that they’d rather hire older workers and young adults than teenagers. They find that they can do it. When we were talking to employers and I asked them about customer service, “Why were you hiring younger college grads rather than teenagers?”

They said, “For one reason, because I can.” They’ve got choices about whom to hire and teenagers just unfortunately are at the very back of that queue.

Paul Solman: Is this the story of college grads having to take historically lowly jobs who, in doing so, displace the people who would have taken them?

Andrew Sum: Yes, as well as other 20-to-24-year olds with, say, just a year of college doing the same thing. So when you go to the mall you’ll find older people and these younger adults.You seldom find teenagers there anymore. Even at fast food places, all the new jobs in fast food went to older workers and immigrants, not one of them went to a teenager.

Paul Solman: When you say “not one,” you mean not one new job compared to the past?

Andrew Sum: That’s right. In other words, there was no increase. But what’s troublesome is not just that teenage employment is so low, but there are entire sectors — manufacturing, construction, utilities, transportation, finance, professional services — where the number of young people, teenagers again, working today has been cut by anywhere from 50 percent to 90 percent of where it was back in 2000. So you just don’t find teenagers working there anymore. Finance cut about 80 percent of the teens that they used to hire back in 2000. Eighty percent [are] gone.

Paul Solman: This is not kids who are also going to school?

Paul Solman: Well, is that a case of Americans are just becoming richer and so the kids don’t need to work?

Andrew Sum: America[n] famil[ies have] not obtained a dollar [in] additional income since 2000, either in our country or in our state. Workers’ wages the last six years have been flat to negative. Almost nobody is doing better except high-level CEOs and people at the higher end of the finance sector. So you can’t say this is affluence. It’s not increased affluence. It’s diminished jobs.

Paul Solman: What about the summer? We’re heading into the summer now. Isn’t that where, historically, there have been lots of programs to hire teenagers?

Andrew Sum: Employers themselves used to hire a lot more young people in the past than they do today.

When I was a young man, I worked a summer in retail and then five years at U.S. Steel. I’d come in at the end of May, stay to Labor Day, had a job every summer. Today, those firms do no summer hiring, and so as a result, teenagers have been cut big.

Employers just don’t hire the number of people in the summer that they used to. Then, what exacerbates that is that the federal government used to have this summer jobs program, and in 2001, it went away. They resurrected it one year in 2009, when Congress passed the American Recovery Reinvestment Act, and we put about 400,000 kids to work for a short period of time. The next year, it was gone; we could not agree on putting that back.

So that’s why you find low-income kids work at such low rates. In the past, they would have gotten some of these jobs from the government. Now they require either the city, like Mayor Menino here in Boston, the mayor of New York, the mayor of Chicago, or the state to put up money to help get them a job. But the federal government has moved out [of] our workforce development system.

Paul Solman: And how about kids that are not in school, what percentage of them ages 16 to 19 are not working now?

Andrew Sum: Over half. If you’re a high school dropout you’re talking about 30 percent working. Among high school grads who graduated from high school in the last three years — we do a separate survey of them the fall after graduation — 45 percent of them held a job, the lowest in the last 50 years we’ve been collecting this data. And to make it worse, of that 45 percent, only half of them were able to get a full-time job. Only one in five young high school grads, not in college, [is] working full-time.

Andrew Sum: Yes. And, if you happen to be a young black male, we’re talking 90. Ninety percent are not working full-time.

Paul Solman: Holy smokes. Is there a self-reinforcing trend here in that kids from relatively affluent families, at the top half of the income distribution let’s say, get internships, can work their way into the job market even without getting paid, where kids at the bottom can’t? Is that a factor?

Andrew Sum: We don’t have a really solid database on the numbers of unpaid internships. But the evidence is very clear though that the affluent kids, until you get to the very top of the income distribution, are the most likely to work in the United States with paid jobs and a large part of that is due to the informal brokering of their parents and relatives. The vast majority of our kids still get jobs when mom calls, dad calls, brothers call, friends get you in. And so young middle- and upper-middle- income kids have that brokering network, and they are far more likely to work both during the summer and during the school year.

Four things that stand out in terms of demographics: Girls are more likely to work than teenage boys. Secondly, race matters a lot. Whites are the most likely to work, followed by Hispanics. Black and Asian youth are at the bottom. The third factor is age. The younger you are, the more likely you are to have been thrown out of the labor market totally. As you reach 19, the likelihood of you getting a job goes up quite a bit. The fourth thing is your family’s background: whether your mom and dad are working, and your mom and dad’s income.

The best predictor of who works among teenagers is whether your mother and father both work and the income of your family. When mom and dad work, you are much more likely to work. Part of it is that mothers and dads who work believe their kids should work. That’s why I say, “the family that works together stays together.”

So all those factors, when you combine them and take a young black high school dropout, low-income male, you’re talking 5 percent employment.

Andrew Sum: Jobless. Not all of them would be classified as [unemployed], but they’re not working. In other words, you could just say, “I gave up looking for work,” which a lot of them do, but only 5 percent are working. Yes, 5 percent.

Another factor is geography. Last year, in the summer in [Washington,] D.C., only 15 percent of the kids worked; California, only 20 percent; Arizona and large parts of the south, 20 percent. Yet in Montana, North Dakota, South Dakota, Iowa, Nebraska, you had 50 percent to 55 percent of those kids working.

As a country, our geographic disparities are greater today than at any time before. They’re far greater for the young than for anybody else. It’s hard to talk about a common U.S. labor market anymore, we’re just that uncommon.

Paul Solman: How are we doing versus other countries?

Andrew Sum: Terribly. We used to be a world leader on putting young people to work. In the last 10 years we’ve moved from the fifth best to the 13th in a pack of 24 OECD [Organization for Economic Cooperation and Development, meaning post-industrial] countries. The United States is no longer a leader. There are countries that far surpass us including Canada, Australia, Germany. Kids there not only work, they are much better trained, much more prepared to work. That’s why I think we should care, because the more you work as a teenager, the more you’re going to work when you’re 20-years-old.

These things carry forward. It’s not like I had one bad year. No, those bad years will haunt you for many years. If you lose work this year, you not only lost your earnings for 2013, you’re going to lose your earnings for the next five to 10 years.

There’s a recent study that shows if you spent six months unemployed as a teenager, that’s going to carry forward for the next 10 years of your life.

Andrew Sum: Because you lose experience, the opportunity to get training on the job. Employers look for stable, consistent work experience. And you’re much more likely to be trained by your employer when you come with a solid work record. When you’ve got a very jittery work record — unstable, not very consistent — I don’t want to train you.

And the other thing is, if you didn’t work, you’re [more] likely to sit at home in your room playing computer games or hanging out with your friends than to go to school or volunteer. Only one in 10 of those kids either volunteered, watched their brother or sister, or went to school.

Paul Solman: What happens to kids who just haven’t worked as teenagers? What’s going to happen to them?

Andrew Sum: Kids without degrees will have a much poorer work record as young adults, work much less, have fewer skills, less income, [will be] less likely to be married, more likely to stay at home. So all of you [reading this], if you want to make sure your children can thrive on their own, have them work as a teenager. The best predictor [of] who is going to be home at 30 is what they did in their late teens and early 20s. 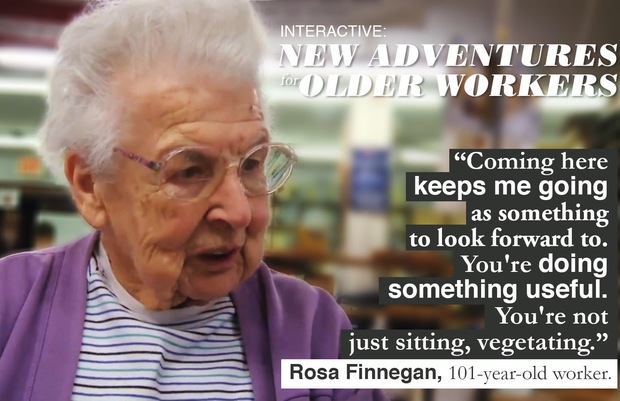