Lessons from the Political Gridlock of 1842 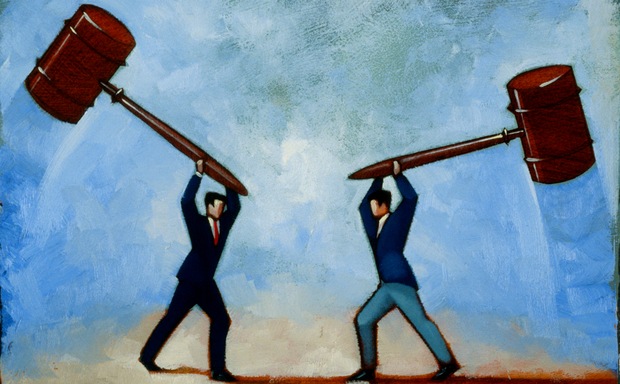 Do you think that American legislators are hindered by partisan politics? Take a historical trip back to 1842 when the country was on the brink of a financial disaster that led to public disgust of Washington politicians. Photo John Labbe/The Image Bank/Getty Images.

Paul Solman: Alasdair Roberts took us back to the defaults of 1842 (and the resentful poetry of William Wordsworth) in a popular post several weeks ago. Return with us again to yesteryear as he looks at the grinding gridlock of pre-Civil War America. Roberts draws from his book, “America’s First Great Depression.”

Alasdair Roberts: The country is only days away from draconian spending cuts mandated by the Budget Control Act of 2011, and once again, the country is boggling at Washington’s dysfunction. The cuts were supposed to be a powerful incentive for the President and Congress to make a long-term deal on the federal budget. It hasn’t worked. “Partisan gridlock,” the Economist complained last fall, “is worse than ever.”

That’s an overstatement. Budgetary gridlock may be bad in Washington today, but we’ve been down this road before.

Roll the clock back to March 1842. Across the country, public disgust with the ineptness of the nation’s leaders was rising.

Obama Says We Must Never Default, But Would It Really Hurt Us If We Did?

A Baltimore newspaper asked whether members of Congress “can really possess American hearts — there being so total an indifference to the interests of the country. Measures of the greatest importance are all contemptuously passed over with neglect, that members may employ themselves in paltry disputes about questions of order.”

Even in Washington, there was frustration with the inability to get anything done. A British diplomat wrote from the capital that the United States had become “a mass of ungovernable and unmanageable anarchy.” Congress “is incompetent to legislate,” sputtered Abel Upshur, the secretary of the Navy. “If the moral sense of the country does not rise against it in disgust, the proof will be complete, that they are without the virtue which is necessary to the preservation of free institutions.”

Charles Dickens arrived in Washington in March 1842 on his first tour of the United States. President John Tyler looked “worn and anxious,” Dickens said, “and well he might, being at war with everybody.” At the other end of Pennsylvania Avenue, Dickens saw “the meanest perversion of virtuous political machinery … in a word, Dishonest Faction in its most depraved and most unblushing form.”

Businessmen in New York and London were in despair. Important questions about spending and taxation were going unresolved. “The condition of the country is most appalling,” reported a London newspaper. “The Treasury is bankrupt to all intents and purposes.” Uncertainty about federal policies was causing the vital transatlantic trade to seize up.

The root of the trouble was an economic crisis, which was entering its sixth year in 1842. A speculative bubble had burst in 1836-39, causing a collapse of the financial sector and a subsequent depression. The country became deeply divided over the best response to the crisis.

Almost all of President Tyler’s cabinet had resigned in September 1841, after he vetoed two successive attempts to re-establish a central bank for the United States. Tyler was burned in effigy outside the White House.

Conditions got even worse in early 1842 because a deadline was looming. A decade earlier, in happier times, Congress had promised southern states that there would be a reduction in hated federal tariffs. Northern states liked tariffs, which protected their infant industries. But the South had no industrial base and depended on open access to British markets for their cotton.

The date for reduction of tariffs had been fixed in law: June 30, 1842. But now northern manufacturers and workers, reeling from the depression, did not want to give up tariff protection. And the truth was that the federal government itself could not pay its bills if tariffs were substantially reduced. Tariffs accounted for 85 percent of federal revenues in 1841.

The dispute was complicated by the demands of frontier states. Several had borrowed heavily from international financiers to build canals and turnpikes. When the economy soured, they defaulted on their loans and became pariahs in London and Amsterdam, as I sketched recently. Now the states wanted financial help from Washington. Federal aid, said an Illinois legislator named Abraham Lincoln, was essential “in the midst of our almost supportable difficulties, in the days of our severest necessity.”

Time slipped by and Congress could not act. A few days before the June 30 deadline, a coalition of northern and western legislators approved a bill temporarily preserving tariffs and giving aid to the west. But Tyler, sympathetic to southern complaints, vetoed it.

The deadline passed and Tyler ordered federal bureaucrats to make the reductions. The legislators passed another bill, this time restoring tariffs and western aid permanently, but Tyler vetoed it again. In Congress, there were calls for his impeachment.

Finally, at the end of August, Congress passed a bill that Tyler would sign. It preserved a substantial tariff, thus breaking the promise to southern states, but it also cut expenditures by abandoning aid for the west. The law passed with a majority of one vote in both the House and Senate. Northerners were thrilled, but southerners seethed. Prominent southern politicians talked once again about secession.

Eventually, four years later, Tyler’s successor would provide the south with some relief against the “black tariff of 1842.” But the wounds did not heal entirely. “The union of the country is becoming less real every day,” complained a prominent Philadelphia merchant, Sidney Fisher. It was “a paper bond, to be torn asunder by a burst of passion or to be deliberately undone whenever interest demands it.”

Of course, we know now how right Fisher was. There were deeper pressures that would soon tear the Union apart.

Obviously we are not in such a dire predicament today. Still, we can learn something from the experience of the early 1840s:

Alasdair Roberts is the Jerome L. Rappaport Professor of Law and Public Policy at Suffolk University Law School in Boston. His book, “America’s First Great Depression: Economic Crisis and Political Disorder After the Panic of 1837,” was published in paperback in January 2013.