5 things you need to know about U.S. investments in Saudi Arabia

The killing of journalist Jamal Khashoggi in the Saudi Arabian consulate in Istanbul has sparked an international firestorm.

The Saudi attorney general said Thursday that the murder was premeditated. Turkey has accused the kingdom of trying to cover it up. The U.S., which has deep political and economic ties to the nation, has been caught in the middle.

But the events of the past month are also raising important ethical and financial questions for Americans and businesses: How much of our interests are in Saudi Arabia? Should we invest in a country that engages in what many see as brazenly immoral and potentially illegal behavior?

As the controversy surrounding Khashoggi’s death continues, here is what you need to know about U.S. investment in Saudi Arabia.

1. You could have investments in Saudi Arabia without knowing it

Most Americans do not actively buy individual stocks. Instead, they invest passively through mutual funds or exchange-traded funds — two types of common investments that can be used in retirement accounts.

These funds typically hold dozens if not hundreds of assets, which gives investors a diverse portfolio and protects them from potential financial losses. But that also means many Americans don’t even know what companies they have vested interests in.

“U.S. investors may find they are passively invested in Saudi Arabia and not know it, given its recent inclusion in some emerging market index funds,” said Karen Young, a Middle East scholar with the American Enterprise Institute.

“U.S. investors may find they are passively invested in Saudi Arabia and not know it.”

But, in the case of Saudi Arabia, only a handful of typical mutual and exchange-traded funds include holdings in Saudi stocks, in part because the Saudi stock market includes fewer than 200 companies in all. So, how much do these funds have invested in Saudi stocks?

“The answer is very little,” said Jon Hale, the director of sustainability research at the research investment company Morningstar.

For instance, in a set of three index funds from Vanguard, one of the world’s largest investment companies, between 0.02 percent and 0.16 percent of the assets are stocks in Saudi companies, according to Morningstar, an independent investment research and management firm. So even if the Saudi economy takes a downturn, individual American investors are unlikely to incur any real losses from direct investments.

But even Americans without any stock in Saudi companies might still have indirect financial interests in the country if their retirement accounts are invested in companies, such as the oil giants, that do business with Saudi Arabia.

The concerns surrounding business dealings in Saudi Arabia after Khashoggi’s death are already having a tangible effect.

Dozens of companies withdrew from Saudi Arabia’s annual investment conference, which began Tuesday in Riyadh. In a blog post, the CEO of Siemens, Joe Kaeser, said he had received “hundreds, if not thousands, of e-mails and social media posts urging me not to attend” the event. 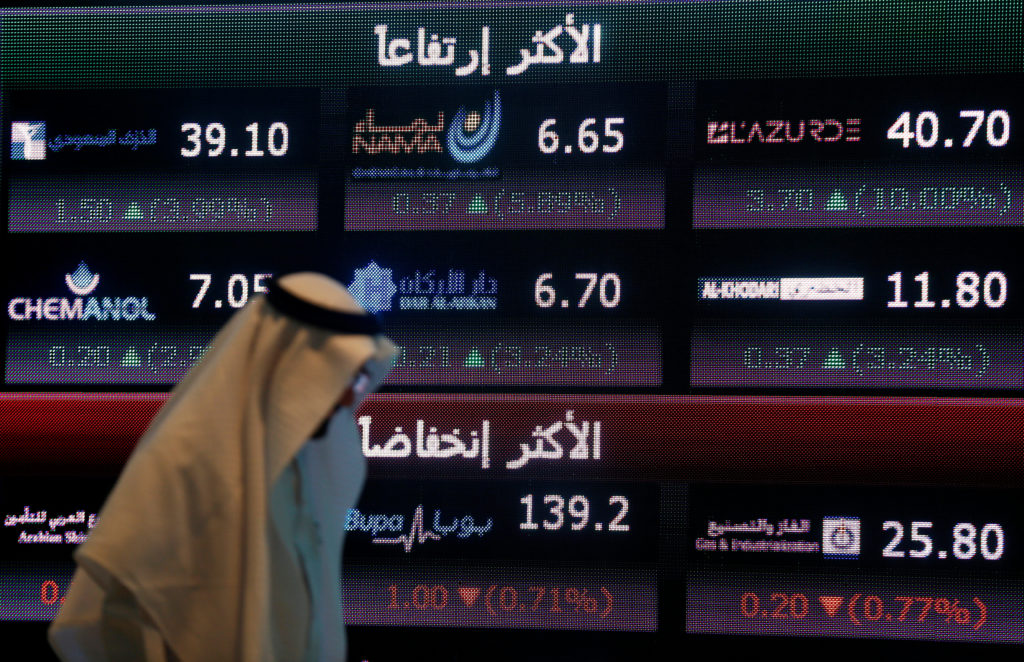 An investor walks past a screen displaying stock information at the Saudi Stock Exchange in Riyadh. Investors have dumped more than $1 billion worth of Saudi stocks in response to Jamal Khashoggi’s death. Photo by Faisal Al Nasser/Reuters

Reuters has also reported that foreign investors have divested more than $1 billion worth of Saudi stocks as concerns about the U.S.-Saudi relationship mount. U.S. lawmakers are calling for sanctions against the Saudi Arabia, and the Saudis have promised to retaliate.

Those moves are in line with previous investor behavior. Demand for “socially responsible” products goes up when investors hear about news that conflicts with their ideals, according to an analysis that was first reported in the Wall Street Journal earlier this year.

Derek Horstmeyer, a finance professor at George Mason University who conducted the research, said the trend is likely to hold true for the current situation with Saudi Arabia.

“When this bad news comes out, this is a way for people to speak with their money,” Horstmeyer said.

A growing number of Americans, particularly millenials and women, say they want to put their money in funds that avoid ethically questionable businesses and aim to have a positive effect on the world. And they want to invest this way throughout their lives, not only during bad news cycles.

But finding out exactly what is in your investment portfolio can be difficult.

“It’s often hard enough to know what kind of financial exposure your financial portfolio is providing you, much less peeling back the onion and finding the social implications,” said Ethan Powell, a former hedge fund manager and the founder of the nonprofit investment organization Impact Shares.

Many investment sites reveal a fund’s top holdings, but not necessarily its smaller assets. Investors can check exactly which companies their funds are invested in through SEC quarterly filings, but finding the documents for each fund can take time.

Since 2012, the number of funds driven by environmental, social and governance factors has doubled.

As a result, more funds are popping up that are driven by environmental, social and governance factors. They avoid investing in some controversial businesses — firearms or oil companies, for example — and put more money into companies that promise to have a positive effect on the world, such as renewable energy firms. The funds are then marketed to socially-conscious investors.

Since 2012, the number of so-called ESG funds has doubled and the amount of money invested in those funds increased 142 percent, according to Morningstar data.

But even ESG funds might not align with a specific investor’s ideals. Other tools, including sustainability ratings, can help investors find funds that support companies they agree with, but those ratings are also subjective, Powell said.

4. The U.S. and Saudi economies are deeply intertwined

Despite Khashoggi’s killing, business leaders are still cautious about cutting all ties with Saudi Arabia, even if they could.

Not only are U.S. companies invested in Saudi Arabia, but a third of Saudi Arabia’s international investments are in U.S. assets.

Saudi Arabia is also the top customer for U.S. weapons, though President Donald Trump has exaggerated how much they buy and how much the relationship affects U.S. jobs. 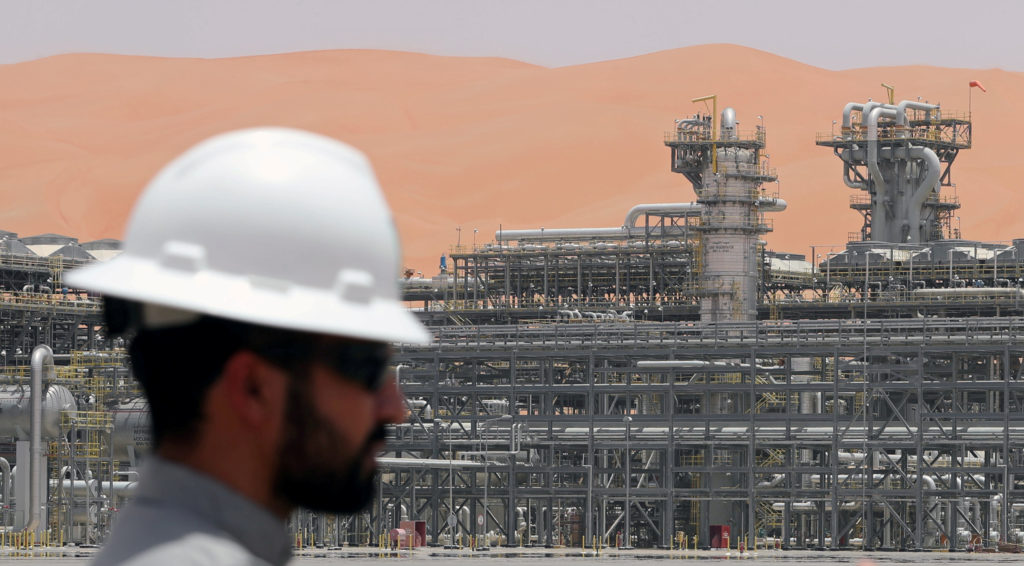 A Saudi Aramco employee is seen at the Natural Gas Liquids facility at Aramco’s Shaybah oilfield. Saudi Aramco owns the largest oil refinery in the U.S. Photo by Ahmed Jadallah/Reuters

Finally, there is the all-important energy connection. Saudi Arabia accounted for about 9 percent of total U.S. petroleum imports in 2017, the second largest share from any country after Canada.

And Saudi investments are embedded throughout the oil supply chain in the U.S., the American Enterprise Institute’s Karen Young said. Just one example: The Saudi national oil company owns the largest refinery in the U.S.

5. Investments in Saudi Arabia are expected to increase in 2019

Saudi assets will account for 2.6 percent and 2.7 percent of the holdings in the FTSE Russell and MSCI indexes, respectively. The indexes aim to mirror the performance of stocks in emerging markets and include hundreds of billions of dollars worth of assets.

The inclusion is a big win for crown prince Mohammed bin Salman, whose Vision 2030 plan calls for turning Saudi Arabia into “a global investment powerhouse.”