Map: These cities are home to the nation’s biggest companies

With the promise of 50,000 jobs from a single employer, and a very public nationwide bidding war that included tax incentives worth billions of dollars (and a cactus gift), Amazon’s search for its second headquarters was unprecedented.

Yet Amazon’s ultimate decision to split its headquarters between New York and the Washington, D.C.-area proves something rather predictable: Big cities win the big companies.

An analysis from Richard Florida, the editor-at-large of CityLab, shows nearly half of the Fortune 500 company headquarters are located in just 10 cities, located largely along the East and West Coasts. New York City tops the list with 70 companies. 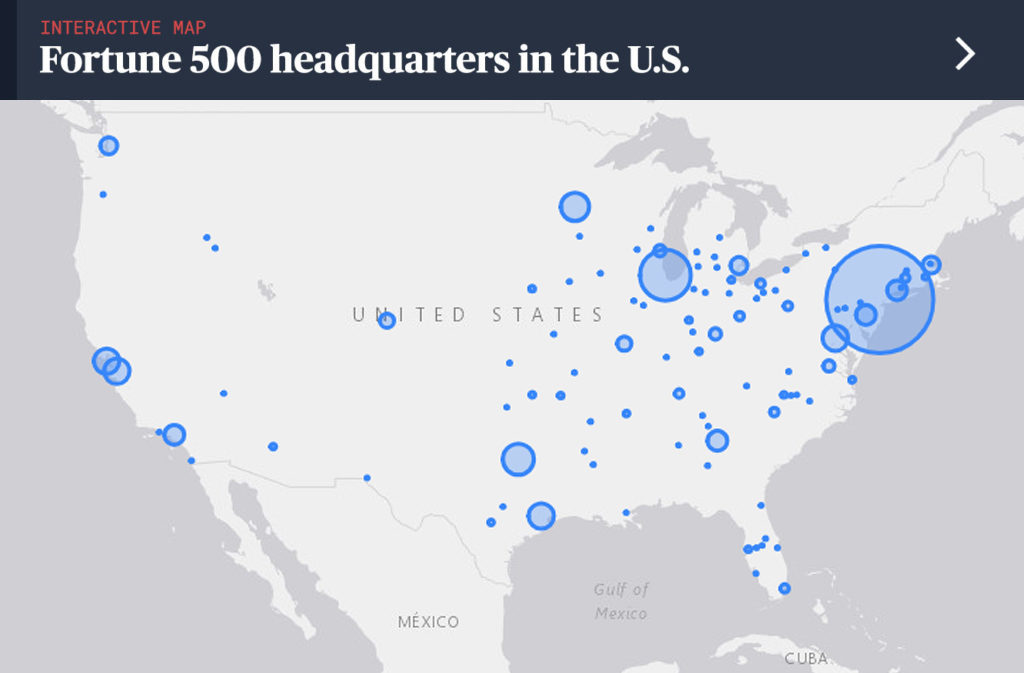 And the nation’s largest companies are becoming more concentrated. Since 1975, Washington, D.C., has seen a 325-percent increase in Fortune 500 headquarters based there.

“Our economy is really divided,” Florida said. “It’s a winner-take-all city system in which the big get bigger and the rich get richer.”

There can be major economic upsides for a city or metro region in landing a large company like Amazon. The company and its employees can generate large long-term tax revenues. Bringing in a tech giant is also likely to incentivize other companies to move to the city and encourage the development of new businesses in the area. University of California, Berkeley economist Enrico Moretti estimates one high-tech job creates five more jobs in the service industry.

There are also real benefits for companies in locating their headquarters in big cities. Cities offer large, highly-educated talent pools, robust infrastructure, access to financial and political leaders, and a network of other companies that do business with each other.

Some argue those incentives are overvalued in a world where the internet, in theory, allows people to work from anywhere. Stephane Kasriel, the CEO of the freelancing platform Upwork and the co-chair of the World Economic Forum initiative, chalks up the concentration of jobs in big cities to a lack of imagination.

“It doesn’t have to be this way. Work is no longer a place,” Kasriel said. “You have the opportunity to relocate people where the cost of living is more available and reinvent the local economy.”

But even as big cities continue to catch the big fish, don’t count the mid-sized cities out just yet. Many of them are building up their own, albeit smaller, tech hubs and attracting other businesses.

“There are places in the middle of the country that are thriving, and just because Amazon didn’t pick them doesn’t signal that the heartland is doomed,” said Joseph Parilla, a fellow at the Brookings Institution’s Metropolitan Policy Program.

A Brookings Institution analysis of U.S. Census data showed more people are moving to large and moderate-sized cities in the middle of the country. The researchers attribute the shift to attractive housing markets and improving economies in areas that were growing prior to the Great Recession and are now rebounding.

Plus, even though smaller cities didn’t land Amazon HQ2, Amazon did announce it would add 5,000 jobs at a new operations hub in Nashville, and has already added 6,000 jobs in many of the other 218 cities that did not make its list of the 20 finalists.

There is also the question of whether cities can gain the benefits that come with an influx of new jobs while staving off the downsides. City officials have taken warning from cities like San Francisco and Seattle where a boom in the tech sector has led to worse traffic, more expensive housing and an increase in inequality.

Policy analysts recommend the cities bringing in new companies should invest in their roads and public transportation, build more market-rate and affordable housing, and partner with universities to grow a highly skilled and diverse talent base.

Left: Traffic is seen in Long Island City, where Amazon.com is reportedly considering as part of its new second headquarters. Photo by Eduardo Munoz/Reuters