Wages are finally ticking up. Here’s why

Average hourly wages rose 3.1 percent over the last year — the first time wage growth broke through the 3 percent ceiling in nine years, according to the latest report from the Bureau of Labor Statistics.

The U.S. unemployment rate held steady at 3.7 percent, and the economy added 250,000 jobs in October, surpassing expectations for the last monthly employment report before the midterm election.

The job gains were over a broad base of sectors from health care to manufacturing, which economists say is a good sign of growth across the entire economy.

“It’s a terrific report. There is nothing you can’t love in here,” said Dan North, chief economist at the credit insurance company Euler Hermes North America.

Here are three takeaways about the latest report and what it means for the economy.

Despite the excitement over the 3.1 percent wage growth, some economists caution this is not a “magic number” and should be viewed with a grain of salt.

When the increase in the costs of goods and services is taken into account, average wages have increased about 0.8 percent since last October. Additionally, the baseline for the wage increase is lower because it is compared to October 2017, when wages dipped. 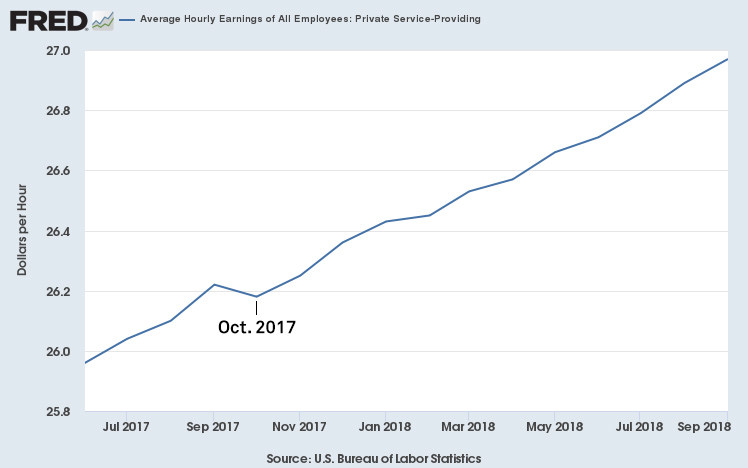 The long-term trends are also troubling. A recent Pew Report showed workers’ real wages–how much they can buy with their money–are actually lower than it was in the 1970s.

But overall, economists say wage growth, particularly over the past three months, is a positive sign that employers are starting to pay more to attract workers in a tightening labor market.

Weekly wages rose even faster than hourly wages at 3.4 percent over the past year, the strongest increase in 11 years. North said that means existing employees are likely working more hours each week as the labor force tightens and employers have a difficult time finding workers.

The labor participation rate also increased to 62.9 percent, up from 62.7 percent. That could be an early indicator that people who had given up on finding a job are now starting to look for work.

The low labor force participation rate “has confounded people for a long time,” said Robert Frick, a corporate economist with Navy Federal Credit Union. “If that is starting to crack, we might see millions of more people joining the labor force.”

The latest numbers also seem to indicate that the economy seems like it is absorbing those workers who are coming off the sidelines. About 711,000 people joined the labor force in October, and about 600,000 more people reported being employed.

What does this mean for the midterm elections?

The jobs report will likely be a boon to Republicans running on their economic achievements, including the stimulus the Republicans injected into the economy through tax cuts, an increase in spending and a reduction in regulations.

Republicans “have to at least get some shout out for how they have maintained and accelerated economic growth,” said Randall Kroszner, an economic professor at the University of Chicago Booth School of Business and a member of the White House Council of Economic Advisers during the George W. Bush administration.

The jobs report will likely be a boon to Republicans.

But Betsey Stevenson, who served two year on the White House Council of Economic Advisers during the Obama administration, warns that the federal stimulus was pushed at a time when the economy was already on a slow but steady path to recovery and did not need necessarily need another boost.

The stimulus “is driving strong growth, but we have a nearly trillion dollar deficit and at some point we have to pay for that,” said Stevenson, who is now an associate professor at the University of Michigan. “This isn’t coming from excellent stewardship of the economy.”

Koszner said the key to whether the reforms work long-term will be whether the reforms lead to higher investment and higher productivity. Early signs show both of those categories are ticking up slightly, though some companies have also used their tax cuts for stock buybacks instead of putting the money into investments or higher wages.

There are also indications that even with the good economic news, the economy is not resonating with voters as much as Republicans would like.

When asked about the issue that would most affect their vote, participants in a recent NPR/PBS NewsHour/Marist poll said that the economy and jobs, health care and immigration were nearly equally important.

In years when the economy is performing poorly, the issue of jobs tends to poll much higher as a top concern.