How did the shutdown affect the January jobs report?

The unemployment rate rose to 4 percent from 3.9 percent in December, but that uptick appeared to be a temporary result of the month-long government shutdown.

“Despites fears of the federal government shutdown derailing the job market, we still have a strong underlying economy,” said Andrew Chamberlain, the chief economist at the jobs website Glassdoor.com.

December’s surprisingly strong report was revised down from 312,00 jobs to a more modest, but still strong, 222,000 jobs.

“It just makes you realize that you have to not get too worked up about one particular month,” said Dan North, the chief economist at Euler Hermes North America. “But if you look at the trend [of job growth] recently, it’s not decelerating. It’s accelerating, and you wouldn’t expect to see that 10 years into the recovery.”

How did the shutdown change the jobs report?

Roughly 350,000 federal employees were furloughed during the shutdown. Of those, 175,000 were counted as unemployed in the Bureau of Labor Statistics survey.

Another 450,000 federal employees were required to work during the shutdown without pay. They were not included in the unemployment rate, either.

The number of employees working part-time for economic reasons spiked in January.

All 800,000 workers are now back on the job and will receive back pay after Republican and Democratic lawmakers reached a deal to reopen the government for three weeks while they try to work out an agreement on border security.

The number of employees working part-time for economic reasons spiked in January. A half-million more Americans were working part-time, for a total of 5.1 million. The increase was because some furloughed federal workers and government contractors took on part-time jobs to make ends meet when they not paid during the shutdown.

The data is in line with trends reported on jobs websites. Glassdoor saw a 10 percent bump in federal workers looking for jobs on its website two weeks after the government shutdown started — when they missed their first paychecks.

The workers who took part-time jobs during the shutdown likely have given them up, so that number should fall in next month’s jobs report.

But Chamberlain cautioned that many federal workers were also looking for full-time work during the shutdown, and the number of people applying for federal jobs dropped 45 percent on Glassdoor.

That data would not show up in the jobs report, but as the federal government tries to replace its aging workforce, “that’s the kind of harm that will build up over years,” Chamberlain said.

Average hourly earnings rose in January by just 3 cents, but they are still up 85 cents, or 3.2 percent, over the past 12 months. That continues to outpace inflation, which stands at about 2 percent.

Wages are being pushed up across a wide range of job sectors as the unemployment rate remains low and employers try to attract more workers with higher pay.

North said the rate is nearly a perfect number, “not too hot” so as to spark fears of inflation, but “not too cold” to raise concerns about wage stagnation.

The U.S. has been experiencing the longest streak of job gains on record. The second-longest streak was from 1986 to 1990, when employers added jobs for 48 straight months. 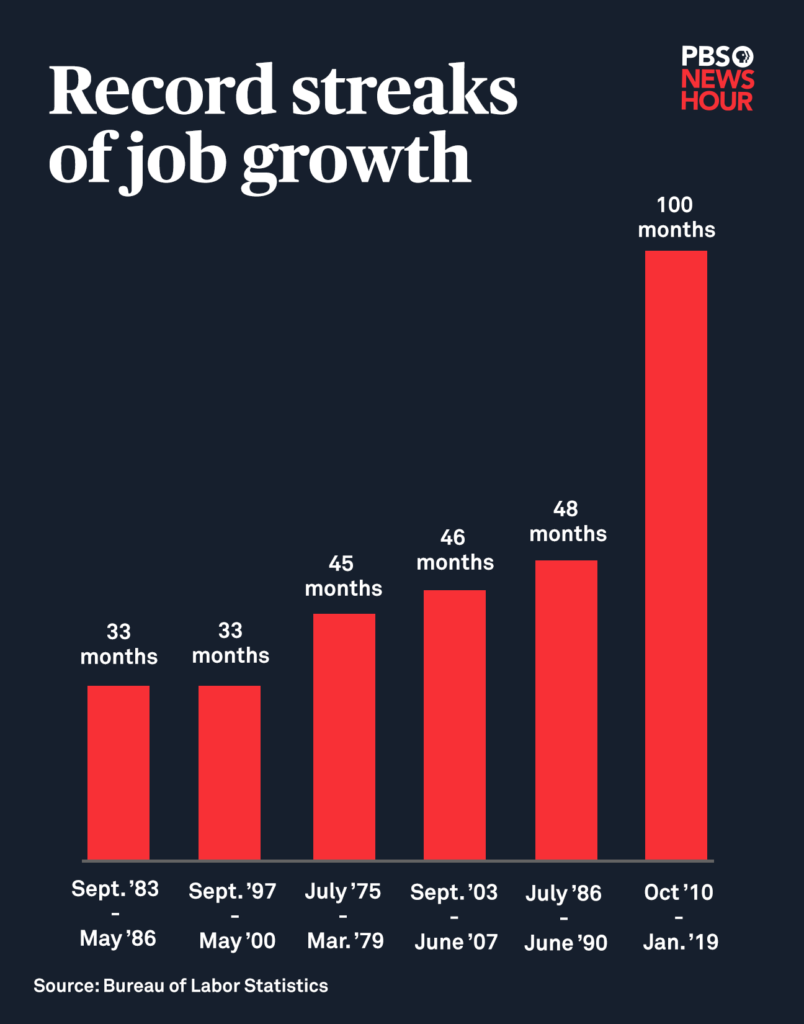 January marked the 100th straight month of jobs growth, by far the longest on record.

There are few signs that employers will pull back on hiring in the next several months, but many economists still expect a slowdown toward the end of this year.

The consumer confidence index has been declining, corporate profits are peaking and the housing market is weak, North said.

Plus, the fiscal stimulus from the Republican tax cuts plan and increased federal spending is expected to run out at the end of 2019.

Left: Commuters walk from the Federal Triangle Metro station after the U.S. government reopened with about 800,000 federal workers returning after a 35-day shutdown in Washington on Jan. 28, 2019. The shutdown caused an uptick in the unemployment rate for January. Photo by Joshua Roberts/Reuters