How the Fed’s balance sheet works and why investors care

Stressing plans to stay flexible, the Federal Reserve indicated Wednesday that it intends to pull back further from the policies it implemented during the Great Recession, namely its injection of money into the economy by expanding what is known as its balance sheet.

After months of focusing on interest rates, which the Fed signaled would remain steady for the foreseeable future, investors are increasingly turning their attention to the balance sheet and whether it could help keep the economy on track or prematurely plunge the nation into another recession.

There are several different kinds of government securities, but you can think of them as Treasury bonds that each have different rules. They mature at different rates or times, but the basic concept is the same — whoever holds the security (whether an individual or an entity) pays the government its value and after several months or years, the government pays that person back with interest.

Just like anyone else would buy a security as an investment, the Federal Reserve also buys securities on the open market.

When the Federal Reserve buys more securities, cash is injected into the U.S. financial system. Thus more money is available to banks, interest rates tend to be lower, and more people are apt to borrow money and spend it, boosting the economy. 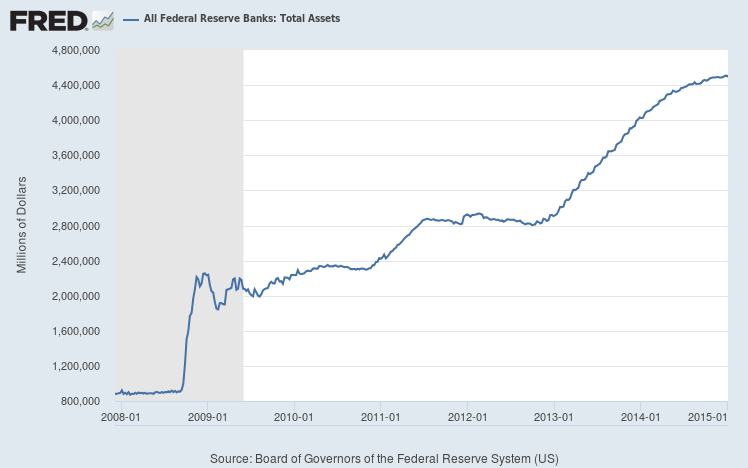 During the financial crisis, the Federal Reserve increased the assets it held as a way to boost the economy. The assets rose from $870 billion to $4.5 trillion over the course of a few years. Source: Federal Reserve Bank of St. Louis

Adjusting its balance sheet is still a relatively new process for the Fed. The policy, which has become known as “quantitative easing,” was rarely used before the Great Recession, but was subsequently adopted by a number of central banks around the world to counter effects of the global financial crisis in their own countries.

Now, on to liabilities. There are two things that are considered liabilities for the Federal Reserve: cash and bank reserves.

Second, when the Federal Reserve wants to pay for the securities it buys, it often does so by putting more money directly into bank reserves. The Federal Reserve does not print money (that’s the Treasury’s job), but at the same time, the Fed can “create” money out of thin air by increasing bank reserves electronically.

How the Federal Reserve reduces its balance sheet

The government securities that are owned by the Federal Reserve essentially dissolve as they mature over time. In the same way the Fed “created” money when it bought the securities, this process “destroys” the money. So if the Fed does not purchase more securities, its balance sheet automatically shrinks. The Federal Reserve could also sell securities, but that is more rare.

Since the beginning of last year, the Fed has been purchasing fewer securities than are maturing, thereby reducing its balance sheet. This process is called “unwinding,” and it’s a strategy the Fed uses to keep the economy from overheating. 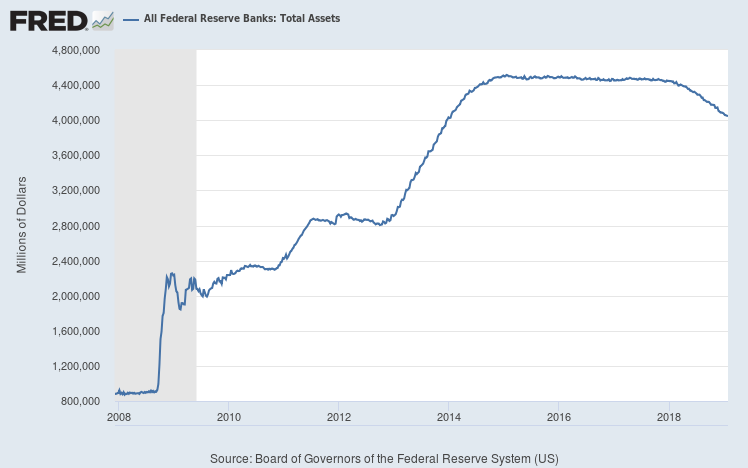 If the economy is very strong and there is too much money available, things can get out of control.

That is, in a normal economic expansion, increased spending leads to increased demand for goods and services. Businesses grow to meet demand. They hire more workers, and as workers become harder to find, businesses raise wages to attract talent. That comes at a cost to the businesses, so they then charge more for their products, which increases inflation. If this cycle goes too quickly, inflation can skyrocket.

You just have to look at any number of countries that have experienced hyperinflation to know that’s not where the U.S. wants to end up.

A quick side note: in addition to buying and selling securities, the Federal Reserve has another tool to help stabilize the economy during this entire process.

After the 2008 financial crash and the Fed’s increase of the money supply, it began paying interest to banks on any money they were holding above the amount they are legally required to maintain in their reserves. The Fed has since raised that interest rate of return to 2.4 percent, encouraging institutions to hold onto more of the money created by the Fed, keeping it out of circulation, and, therefore, keeping a damper on inflation.

Why investors worry about the balance sheet

Getting back to the balance sheet, even though the Federal Reserve wants to keep the economy in check, it does not want to reduce its balance sheet too quickly either.

In 2017, St. Louis Fed economist David Wheelock likened it to a car stopping at a stop sign. You want to gradually step on the brake rather than driving at full speed and then slamming on the brakes at the last minute.

“The idea is, gradual reduction is less disruptive than doing it all at once,” Wheelock said in a Federal Reserve podcast episode.

Right now, investors are afraid the Federal Reserve is hitting the brakes too hard, reducing the amount of money available and potentially sending the economy into a recession.

When Federal Reserve Chair Jerome Powell suggested in December that the Fed would continue to reduce its balance sheet, stocks dropped. When he walked back some of those comments on Jan. 4, stocks spiked.

Some financial experts, however, think the amount of money available — known as liquidity — is still at a good level and investors are simply getting jittery.

Of course, “sentiment” can still have real effects. If investors and the general public get too nervous, they might not spend as much money and, like a self-fulfilling prophecy, send the economy into a recession.

The Federal Reserve understands this, which is why Powell said on Wednesday that the central bank would “not hesitate to make changes in light of economic and financial developments.”

He cautioned that the Federal Reserve does not want to use the balance sheet as an “active tool,” like it does with interest rates, but “occasional changes” to the current plan for the balance sheet “could be warranted.”

That message seemed to be what investors wanted to hear. All three main stock market indexes ended the day up more than 1.5 percent.

Left: The Federal Reserve has been reducing its balance sheet since the beginning of 2018. Photo by Flickr user ctj71081.

After contentious Brexit vote, May to return to EU in hopes of a better deal