How to get what’s yours from Social Security

Editor’s Note: In this special edition of “Ask Larry,” we present an excerpt from Larry’s forthcoming Social Security book, co-written with Making Sen$e Medicare columnist Philip Moeller and our own Paul Solman. “Get What’s Yours: The Secrets to Maxing Out Your Social Security” will be published by Simon & Schuster on Feb. 17.

In the following excerpt from chapter one, Paul and Larry recount how Paul got an extra $50,000 from Social Security just by playing tennis with his good friend Larry and listening to his advice. His message was so important that the authors thought everyone, not just those fortunate enough to spar with Larry on the tennis court, ought to know how they can get the most benefits they’re entitled to.

This book was born of a simple question: How old are Paul and his wife? 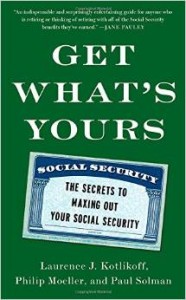 Larry and Paul were taking a break from what they call tennis, shooting the breeze, since talking is easier than running after errant shots. Larry launched into a harangue, as he often does; this one was about Social Security’s impossible complexity. Paul was listening, as usual, with his skeptical journalist’s ear. Or, maybe, since it was Larry, just half-listening.

Then Larry asked, how old were Paul and his wife and when were they planning to take their Social Security benefits?

Proudly, Paul told Larry not to worry: he and his wife had it all figured out. They would both wait until 70, when Paul would get something like $40,000 a year instead of the $30,000 or so if he took his benefits at 66, his “full” — but not “maximum” — retirement age, which was coming right up. Paul had been reading and saving those annual green statements from the Social Security Administration for years with their “Estimated Benefits.” He’d been reading his wife’s, too. As the family’s financial planner, he knew just how much they were entitled to.

But how old are you and Jan? Larry asked.

What difference does it make? said Paul. Like I say, we’re both waiting until 70.

Here’s what you do, said Larry, never at a loss when it comes to speaking in the imperative. Jan should apply for her Social Security retirement benefit when she turned 66, but then “suspend” it. That is, she would make herself eligible for the benefit but wouldn’t take it.

Then, said Larry, when you (Paul) turn 66, you apply just for a spousal benefit. When you each hit 70, you do as originally planned: you each take your own retirement benefits, at which point they will start at their highest possible values.

Or, Larry continued, clearly thinking aloud, you apply and suspend at 66 and Jan begins taking the spousal benefit, since you earned more than she did, didn’t you?

Paul can be quite dismissive of what he considers Larry’s flights of fantasy, Larry being the epitome of “often overstated, but never in doubt.” Yet Paul had begun to pay close attention. Having reported on business and economics on public television for decades, Paul understood the intricacies of business, finance, and economics better than most Americans (though admittedly, that may not be saying much). The exceptions, however, were the professional economists he’d befriended in the course of his career. Larry was one of them, and among the most deeply versed in financial planning.

Spousal benefits? Paul had vaguely heard of them. He had, however, never imagined he or his wife were eligible for any, though, had you asked him why not, he couldn’t have told you.

Spousal benefits for four years. That should be almost $50,000, Larry quickly estimated.

An aside is in order here. Larry is a world-famous scold or, he will tell you, a dead-on Cassandra, with respect to Social Security’s insolvency. Advising people like Paul to take extra benefits from the system while himself decrying the system’s funding shortfall was not what Paul expected to hear. (More on that in Chapter 18 of the book.) But Larry believes it’s not fair that some beneficiaries get more than others simply because they know the system’s rules. And Paul and Phil agree with him.

Well, if Jan’s Social Security full retirement benefit were, say, $24,000, you’d be eligible to get half that as a spousal benefit: about $12,000 a year. And if you get $12,000 a year from age 66 to age 70, that’s $48,000. If, on the other hand, Jan takes the spousal benefit on your Social Security earnings record, she’ll get more per year but for only three years instead of four, because she’ll be 67 by the time you become eligible, only three years from 70. But still, that would mean…etc.

However number-laden the trees, the forest was plain to see: there seemed to be an unambiguous strategy for maximizing benefits that Paul and Jan were eligible to collect, having contributed for decades, but had been entirely unaware of.

If this is true, said Paul, I’m buying you dinner. Anywhere in the world.

Boston will do, said Larry, who also lives there. But there are dozens of really important details like this one. What we should really do (we’re compressing here) is write a book. And we should include Phil Moeller, a retirement expert who’s already spoken with me about such a project. He’s been a financial journalist for years, and has written article after article for U.S. News & World Report and Money about retirees who collectively leave tens of billions of dollars in Social Security benefits on the table by failing to claim everything to which they are entitled. Plus, Phil loves the Red Sox (although not as much as the Baltimore Orioles) and the New England Patriots.

Fast-forward. Paul’s wife came of age (66). She filed and suspended—by phone. The person she talked to couldn’t have been nicer. Paul came of age. He filed for a spousal benefit. The Social Security woman on the phone had never heard of file-and-suspend, checked with her supervisor, and came back on the line to thank him for enlightening her about a strategy she could now share with everyone who called. When they hit 70, both Paul and his wife called again, were again reprocessed — graciously, competently, and within minutes, though his wife was nonplussed when asked if she’d ever been a nun. And Paul has since taken Larry to dinner, and a pretty good dinner at that.