How a wealth test for immigrants could affect the U.S. economy

Both supporters and opponents of a new Trump administration rule that creates additional barriers for immigrants trying to enter the U.S. or trying to gain legal permanent residency are using economic arguments to make their cases.

The so-called “public charge” rule bars immigrants from coming to the U.S., claiming that if they are deemed to be unable to support themselves financially, they are at risk of needing federal safety net benefits–or becoming a “public charge” of the federal government. It also penalizes immigrants living in the U.S. who are trying to become lawful permanent residents, if they use federal safety net programs.

The rule is being challenged in court, but the U.S. Supreme Court this week allowed the change to go into effect and become enforceable while it makes its way through the judicial system.

Under the new guidance, immigrants who use a public benefit for more than 12 months in a 36-month period would be penalized in their application to become a legal permanent resident– commonly known as a green card holder. Each individual benefit counts toward the total time, so using both food and housing assistance for one month, for example, could count as two months worth of benefits.

If the household income of an immigrant trying to come to the U.S. is less than 125 percent of the Federal Poverty Guidelines, or $21,550 for a couple, they could also be at risk of being denied entry. The Department of Homeland Security said it would use that threshold as one of several factors when deciding whether to admit an immigrant to the U.S. Immigrants with twice that income, or 250 percent of the Federal Poverty Guidelines, would be given higher preference.

Refugees are exempt from the rule.

The White House has argued the rule, which some are calling a “wealth test,” will benefit American workers and save taxpayer dollars. Immigration advocates counter that it is creating an unnecessary barrier for hardworking immigrants trying to better their lives and who contribute to the U.S. economy.

Meanwhile, economists caution that it’s difficult to estimate the exact cost or savings from the rule because it depends on how strictly it is enforced and there could be numerous ripple effects that will reverberate throughout the economy for years. It is also unclear what the cost would be for enforcing the rule, or for checking on immigrants’ household income before coming to the U.S.

On the whole, immigrants make up a small share of all Americans who use federal public assistance programs. U.S-born individuals, for example, make up 86 percent of both Medicaid and Supplemental Nutrition Assistance Program, or SNAP, recipients.

Immigrants also use less total welfare and entitlement benefits in dollar value than native-born Americans, according to a report from the CATO Institute, a libertarian think-tank.

In total, native-born Americans used $6,976 worth of welfare programs per person in 2016. That’s compared to $5,535 per immigrants–a 21 percent difference.

Native-born Americans are also more likely to use the Temporary Assistance for Needy Families; Women, Infants, and Children (WIC); and SNAP, which is commonly known as food stamps. 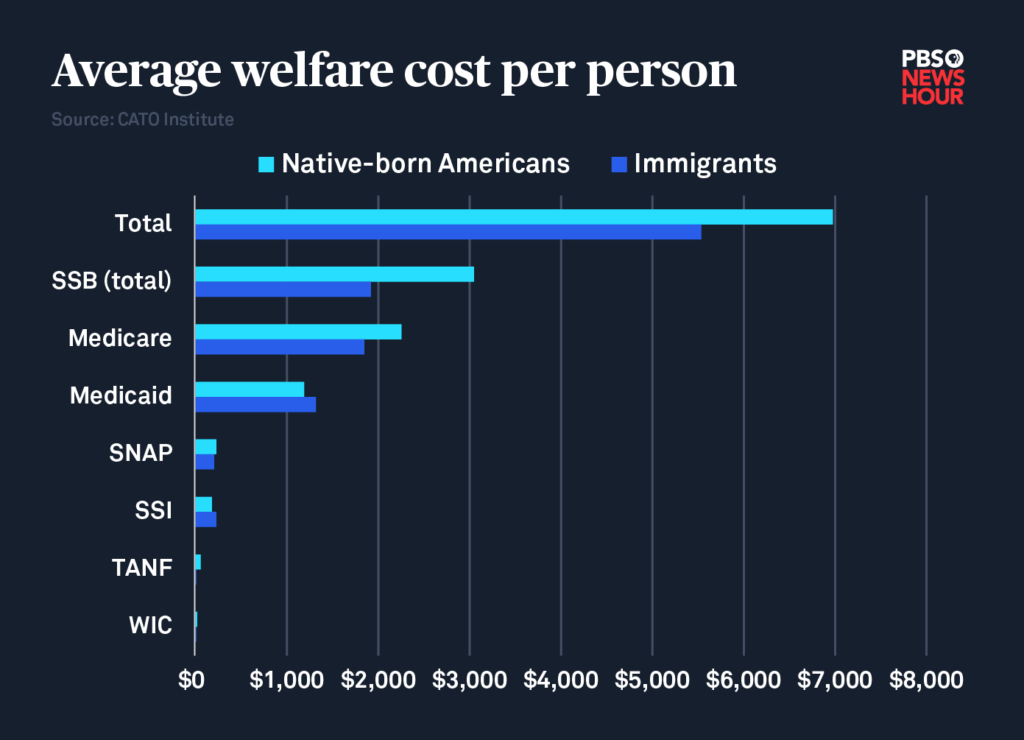 Undocumented immigrants, which by some estimates make up half of all non U.S. citizens living in the country, are generally ineligible to receive federal benefits.

In response to public comments about the public charge rule, the Department of Homeland Security did not dispute the CATO findings but said they “are not inconsistent” with its final rule.

In a news conference last year, U.S. Citizenship and Immigration Services Director Ken Cuccinnelli said the issue is not how immigrants’ benefits compare to native-born citizens, but whether the immigrants coming to the U.S. are self-sufficient.

“The benefit to taxpayers is a long-term benefit of seeking to ensure that our immigration system is bringing people to join us as American citizens, as legal permanent residents first, who can stand on their own two feet, who will not be reliant on the welfare system — especially in the age of the modern welfare state, which is so expansive and expensive,” Cuccinnelli said.

What immigrants cost and contribute to the U.S. economy

Estimates on how many people will be affected by the public charge rule varies widely.

Around 1.2 million people seeking to become green card holders each year would be subject to the rule, but many of those are not eligible for, or already choose not to use public benefits. However, there are likely millions more immigrants trying to come to the U.S. who could also be affected.

The Department of Homeland Security estimates 382,264 immigrants per year will be affected by the changes. The New American Economy, a nonprofit that focuses on immigration research, puts the estimate much higher–at 3.9 million.

If all of those immigrants were barred from living in the U.S., the nation’s economy would lose about $82 billion per year, the New American Economy analysis finds. That number includes $48 billion the affected immigrants would earn in income each year, plus an estimated $34 billion that would otherwise be generated because of the money they spend in the U.S economy and the amount they would pay in taxes.

The Department of Homeland Security has estimated a much lower cost–$144.4 million. It also estimates that federal and state governments will pay out $2.47 billion less each year in benefits–a key Trump administration argument for implementing the changes.

The public charge rule aside, first-generation immigrants generally cost the government more than U.S.-born Americans, according to a 2017 report from the National Academies of Science, Engineering, and Medicine. On average they cost about $1,600 per person annually.

But the children of those immigrants have a net positive effect on the U.S. economy, contributing about $1,700 per person per year. Third generation immigrants contribute about $1,300 annually.

The financial burden of immigration tends to fall more heavily on state and local governments because of the cost of their children’s public school. At the same time, investing in children’s education, health care and food security is likely to make them more productive workers with higher incomes later in life, which, in turn, generates more tax revenue.

“Adequate resources in childhood matter a lot for self-sufficiency and wellbeing later in life,” said Tara Watson, an economics professor at Williams College. “If we restrict benefits available to children who will grow up to be adults, in the long run we may be doing more harm than good.”

How federal benefits play into productivity

Studies have shown that people experiencing financial strain tend to be less productive in their work, largely due to the mental burden of not being able to meet their basic needs.

“If you are more concerned with your immediate needs to feed yourself, to house yourself, to make yourself warm, you are not able to make those investments that will help you make smarter decisions about your future and your family’s future,” said Andrew Lim, director of quantitative research for New American Economy.

Public welfare advocates say federal benefits, such as food stamps and housing assistance, alleviate financial stress, and more worker productivity tends to mean higher pay, which, in turn, means more contributions to federal taxes and the U.S. economy as a whole. Conversely, if a person does not have access to basic health care, they could become sick and unable to work.

The Department of Homeland Security has said it “does not agree that this rule would be the cause of such unfortunate events,” such as a person becoming ill.

The hospitality, agriculture and construction sectors in particular have been facing labor shortages in recent years.

The expanding economy has been creating more jobs, but a crackdown on unauthorized immigrants, combined with better job opportunities in immigrants’ home countries–particularly in Mexico–have contributed to a shortage of workers.

If fewer low-income immigrants are allowed into the U.S. because of the public charge rule, those shortages are likely to worsen.

But the Trump administration has taken other steps to increase the number of immigrants workers allowed into the U.S. each year to work specifically in the agriculture industry and in seasonal jobs, which could offset some of the reduction that might be caused by the public charge rule.

Opponents of the public charge rule argue it could have a chilling effect, causing immigrants who are legally allowed to use federal public benefits to forgo utilizing those programs –particularly children who are U.S. citizens but live with their immigrant parents.

While it is unclear whether there is a direct link to the rule’s unveiling in 2018, SNAP participation rates among families with immigrant members fell between March 2018 and March 2019.

During the same time, the participation rate for households with no immigrants increased, according to Watson’s analysis of federal data that was first published in Econofact.

In response to concerns about a chilling effect, the Department of Homeland Security said in its final rule that it expects immigrants “will make purposeful and well-informed decisions,” but the agency said they declined to scale back the rule to avoid the possibility that individuals might choose not to enroll in welfare programs because “self-sufficiency is the rule’s ultimate aim.”

An economic or value judgment?

In the end, Watson said it is difficult to calculate exactly how much the public charge rule will affect the U.S. economy.

The change is a rule, not a law, and the language is fairly vague, so the next presidential administration could choose how much weight to give the income thresholds and public benefits measurements when considering the host of factors involved in an immigrants’ application for legal status.

While some countries put more emphasis on immigrants’ skillset when considering admission, the U.S. has historically prioritized family reunification. If the public charge rule is strictly enforced, the U.S. would be signaling a major shift in its immigration policy.

“We would lose the emphasis on families,” Watson said. “And that’s a value judgment the American people need to make.”

For their part, Trump administration officials have said the rule promotes the “ideals of self-sufficiency and personal responsibility.”