How natural disasters can increase inequality

Natural disasters and subsequent recovery efforts consistently exacerbate economic inequality, according to a growing body of research about how extreme weather can affect Americans’ finances over time.

The latest report on the issue, released Thursday by the Urban Institute, shows that low-income Americans experience the biggest drop in their credit scores following “medium-sized” disasters, or those that caused less than $200 million in damage. The sample size was based largely on a group of people who were hit by storms and flooding in 2014 in the Detroit region.

Researchers found that after one year, people who had poor credit scores — from 300 to 649 — before the storms saw their scores drop 15.5 points, compared to a 4-point drop for people who started with good credit scores–between 700 and 850. And after four years, the gap widened. Nearly 29 points dropped off the scores of people with poor status before the disaster, compared to an 8.4-point drop for people who started in good standing.

“The negative effects of the disasters, they persist and grow,” Urban Institute lead researcher Caroline Ratcliff said. “As the waters recede, people’s financial hardships are only just beginning.”

Credit scores are just one measurement of a person’s financial stability, and they can present an incomplete picture in part because companies provide little transparency about how they compile the scores. Credit scores can also perpetuate existing racial inequities. But they can also signal a person’s past financial struggles, and serve as a predictor for their future finances. People with low credit scores often are not given the same access to credit cards, auto loans and mortgages, which can put them at a disadvantage in the long term.

Ratcliff acknowledged that her team’s recent study had a restricted sample size, but she said the broader findings track with other research on the subject, as well as anecdotal evidence that indicates poorer neighborhoods are recovering more slowly from recent storms such as Hurricane Harvey.

The gap between white and black Americans who experienced natural disasters or lesser storms grew substantially between 1999 and 2013, according to a report that is part of a larger series of studies from urban sociologists James Elliott from Rice University and Junia Howell with the University of Pittsburgh. White Americans living in counties that experienced $10 billion in damage from storms gained an average net worth of $126,000 during that time period, the research shows. Black Americans in the same areas lost $27,000.

Surprisingly, the researchers found that the more aid a county receives from the Federal Emergency Management Agency, or FEMA, the more inequality increases.

The reason? “The focus is on property and not people” affected by natural disasters, said Howell, who also pointed to research showing climate change is making natural disasters more frequent and more extreme.

Typically, FEMA, nonprofits, and private insurance companies all pay out aid based on the property that was damaged — a formula that can end up benefiting richer white Americans who tend to own more property. Homeowners, for example, often get enough money to not only make up for their loss, but upgrade their homes. White Americans also tend to live in areas where property values are higher, so insurance pays out more money to rebuild after a disaster.

In a statement to NewsHour, a FEMA spokesperson called the Urban Institute’s study “misleading.”

“Urban Institute’s study is misleading and lacks context. Every disaster is different and has multiple unique factors that need to be considered, such as, location and the scope of the disaster. Numbers alone cannot and do not provide a complete picture of what is needed to help communities recover. FEMA works closely with state, local, territorial, and tribal partners to support their response and recovery process, which will always vary based upon the unique circumstances of the particular disaster,” the spokesperson said.

The FEMA official added: “It is the work of the whole community before, during and after a disaster that makes for a successful recovery. The insinuation that our federal response ‘increases inequality’ for survivors is absurd. FEMA has and will always work tirelessly to respond to and support survivors with their recovery from all presidentially declared disasters.” 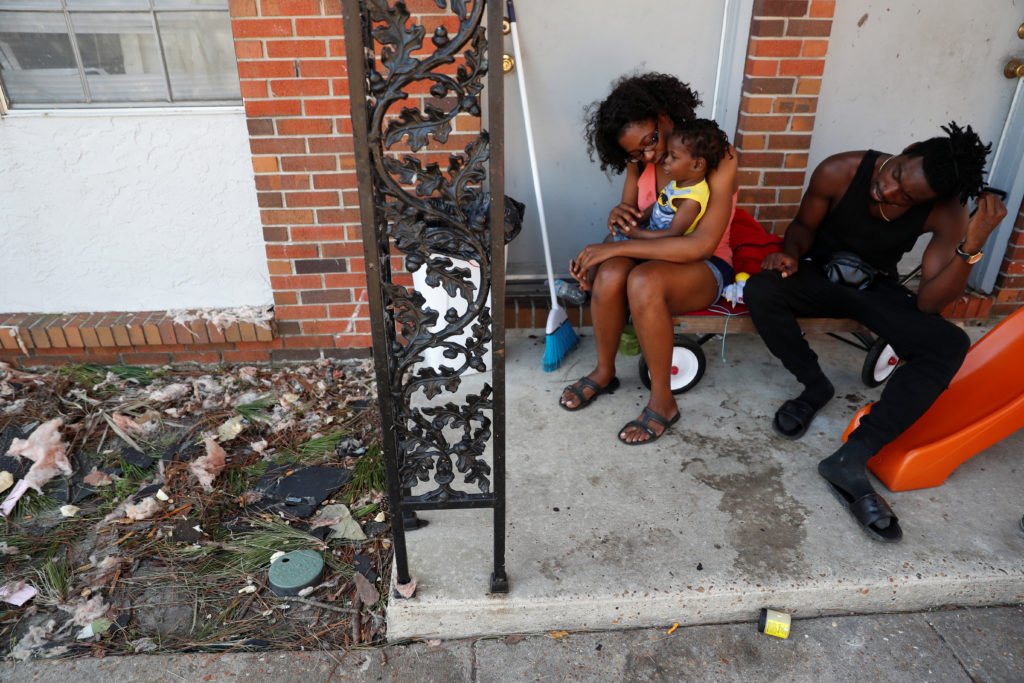 Shauntese Russell, 23, and Maurice Brown, 24, sit with their son, Maurice Jr., amid debris left by Hurricane Michael outside their apartment in Lynn Haven, Florida, on October 14, 2018. Renters are often at a significant disadvantage after a storm because recovery efforts are focused on repairing property, research shows. Photo by Terray Sylvester/Reuters

Meanwhile, lower-income black Americans — especially renters — are left trying to find new housing. FEMA does temporarily provide hotel vouchers and other rental assistance after a storm, but renters face longer-term uncertainty. Rents tend to rise after a storm, when an influx of construction workers and displaced people seeking new places to live drive up the demand for affordable housing.

Renting can also affect a person’s job prospects. Renters are more likely to be forced to move after a storm, which Howell said can make it more difficult for them to be productive at work and hold onto their jobs. Low-wage, hourly workers are also more likely to lose income after a storm than salaried employees because their place of business shuts down, whether temporarily or permanently.

Rents tend to rise after a storm, when an influx of construction workers and displaced people seeking new places to live drive up the demand for affordable housing.

What’s the solution? As part of the new study, Urban Institute researchers recommend that federal aid focus more on long-term recovery efforts. The study also suggested improving the bureaucratic process people use to request assistance after a storm, and dedicating more resources to low-income communities before a disaster hits.

Howell said those recommendations are important, but the federal government, cities, nonprofits and businesses all need to start integrating equality efforts into their planning, which she said they are just now beginning to do.

The federal government needs to better track where it gives its aid, the Army Corps of Engineers need to build more levies and other defenses to protect poorer neighborhoods, and cities need to rethink which areas they try to get back online more quickly after a disaster, she said.

Otherwise, Howell said, “if we are just trying to restore the property that has been destroyed, we will be restoring inequality.”