How Trump’s tax cuts are boosting GDP, and why that might not last

The U.S. economy grew 3.5 percent in the third quarter of 2018, according to the Commerce Department on Friday. That’s a slowdown from 4.2 percent GDP growth in the previous three months, but a solid gain and the latest sign of stable economic productivity.

The latest figures give President Donald Trump — who has frequently promised at least 4 percent GDP growth– something to point to as evidence that his policies are helping the economy. Trump has also credited the GOP tax law with boosting economic growth.

The GDP report also comes at a good time for Trump and Republicans, as the party fights to hold onto control of the House and Senate in the midterm elections. The report was one of the last major economic indicators before Election Day (there will be one more jobs report released Nov. 2).

But none of this is unexpected.

As the chart below shows, the Congressional Budget Office estimated the U.S. economy would grow 3.3 percent this year. That estimate seems right on track: the economy has grown by an average of 3.2 percent in the first three quarters of 2018.

Two of the main reasons for the boost are a rise in government defense spending, as well as consumer spending, which jumped 4 percent in the third quarter. Americans are buying more because of increasing wages, a lower unemployment rate and the new tax law Trump signed in December that slashed corporate taxes and lowered income tax rates for many individuals.

“When tax cuts put money in people’s pockets, they are likely to spend it,” said William Gale, the co-director of the Urban-Brookings Tax Policy Center.

Americans are expected to see their taxes reduced by $1,600 on average this year, with most of those cuts going to households making between $308,000 and $733,000, according to an analysis by the nonpartisan Tax Policy Center.

But there is a big difference in how tax cuts affect economic growth in the short run versus the long run, Gale added. 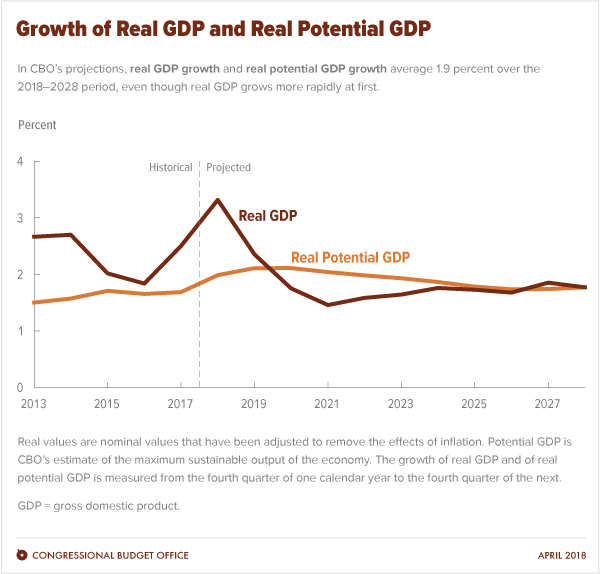 The Congressional Budget Office estimated GDP growth would spike in 2018 but drop to more moderate levels in the coming years.

The chart indicates that real GDP growth (“real” means adjusted for inflation) is expected to drop significantly in the long run.

The Congressional Budget Office points to several reasons for that: the expiration of personal income tax cuts, slower growth in federal spending, and higher interest rates and prices.

The individual tax cuts in the GOP law are set to end in 2025, although Republicans have proposed making them permanent.

The other main problem is that gap you see in the chart between GDP (the amount the economy is actually producing) and potential GDP (what an economy could produce when it is operating at its highest potential).

Real GDP can be higher than real potential GDP if the economy gets extra stimulus from government spending or tax cuts.

But higher real GDP is good, right? Well, not always, because having GDP growth above potential GDP typically leads to higher prices, also known as inflation. If inflation isn’t kept in check, it can feed on itself in an upward spiral — what’s known as wage-price inflation.

Gale compared that stimulus to having too much coffee.

Trump has said the Federal Reserve is the biggest risk to the U.S. economy.

“If you are tired in the afternoon, that will get you through the rest of the day, but a steady diet of sugar and caffeine is not healthy,” he said.

The last time inflation spiked in the 1970s, it led to the Federal Reserve hitting the brakes hard on economic growth, and a sharp recession followed.

The Federal Reserve typically tries to steer a middle course between runaway growth that fuels inflation and slow growth that doesn’t create enough jobs. Right now, the Fed is raising interest rates to keep inflation in check, a clear sign of concern the economy could overheat. (In a series of unusual attacks, Trump has denounced the Fed’s recent rate hikes and claimed the central bank is the “biggest risk” to the U.S. economy.)

Conservative analysts said they weren’t too worried about inflation because the new tax law is meant to encourage investment, not just spending.

“If businesses are investing in new pieces of equipment, it is making them more efficient and that can lead to lower prices on the widget that is being produced,” said Adam Michel, a economic and fiscal policy analyst at the conservative Heritage Foundation.

In the end, simultaneous spikes in investment and consumer spending could balance each other out, leaving the price of most goods largely unchanged.

But that assumes companies will invest their tax cuts in new equipment and facilities. So far, much of the money from the tax cuts is not going directly to investments, but instead to stock buybacks, something Democrats predicted in their opposition of the bill.

There is another threat to future real GDP growth as well: tariffs. Exports spiked in the second quarter because producers were trying to sell their products before the Trump administration’s new tariffs — on goods like steel and electronics from China and other countries — kicked in. Those exports dropped in the third quarter and could continue to drop if the tariffs remain in place.

The upshot: the overall economy remains strong, for now. Unemployment is low. Wages are starting to tick up. The question is how long it can last.

How the Khashoggi murder could affect the intertwined US-Saudi economies