Manufacturers say their worker shortage is getting worse. Here’s why

The National Association of Manufacturers is warning that 2.4 million manufacturing jobs could go unfilled between now and 2028, according to a study from the association and the consultancy firm Deloitte.

But there’s debate about that number and what it means for our economy.

Here’s how it breaks down.

Is the problem really that large?

There’s plenty of anecdotal evidence to suggest employers are having trouble finding workers.

Take, for example, Phil Raimondo. He’s the CEO of Behlen Mfg. Co., a manufacturing company based in the small town of Columbus, Nebraska, that makes pre-engineered metal buildings, grain bins and feed gates.

When he first started the business in 1990, he said all he had to do was put an ad in the paper and wait for a qualified welder or other skilled laborer to walk through the door. Now, he said, he’s desperate for workers.

“If you said I could add 10 to 15 welders or operators for truck driving, I would take them in a heartbeat,” Raimondo said.

But some economists don’t agree that it’s a major problem.

Andrew Weaver, an assistant professor of labor and employment relations at the University of Illinois, conducted his own study on the skills gap in 2016 and found only about a fourth of employers were having trouble hiring.

Still, Weaver said he expects shortages have become more pronounced over the past year because of the low unemployment rate.

Economists disagree with each other on this point, too. Many people have argued over whether there is a skills gap, which Education Week laid out in a previous report.

Some of the case for a skills gap:

And the case against:

Then, there’s the role technology has played in all of this. People like James Bessen, an economist and the executive director of the Technology and Policy Research Initiative at Boston University School of Law, say “there is a valid conception here.”

“We’re undergoing rapid technological change, and there just aren’t people with certain skills out there, so it’s hard for firms and manufacturers to hire people with the skills to handle the technology,” he said.

“The conventional wisdom that computers hit the industry and [that] is a problem because workers never got the memo that they need to study programing is wrong. If anything, higher levels of computer demand correlate with lower levels of hiring problems,” he said.

Why should we care?

The National Association of Manufacturers says the problem of not being able to hire qualified workers is getting worse as the unemployment rate drops and the labor market tightens and baby boomers retire. 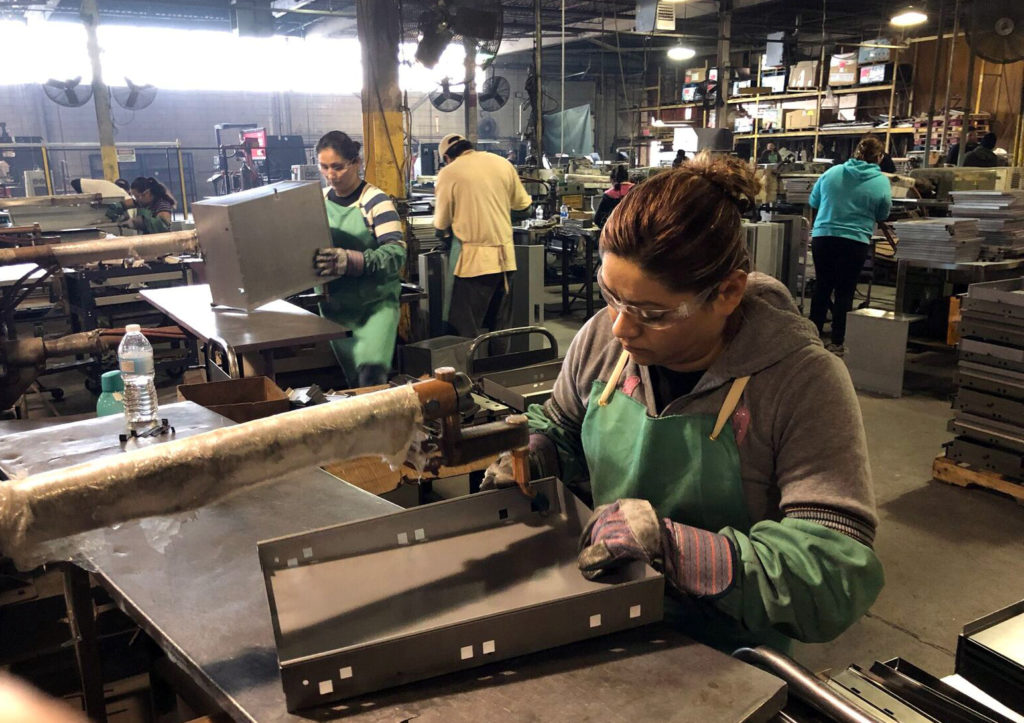 Those are problems facing the economy at large, not just the manufacturing industry. And if jobs go unfilled, that’s lost economic potential.

The National Association of Manufacturers estimates the U.S. economy would lose $2.5 trillion in GDP over the next decade if the 2.4 million jobs are not filled.

What can employers do?

The solutions to employers’ hiring problems depend on whether you believe there is a skills gap. Here are three solutions employers are trying.

Manufacturers are starting to raise wages, but they say are often competing among themselves for workers.

But economists say raising wages even further could convince young people to enter the industry.

On a related note: Some economists say temporary staffing, which often does not come with benefits, has also exacerbated the hiring problem.

A report from the left-leaning Economic Policy Institute found temporary staffing lowered wages by 4 percent. The share of temporary workers in the manufacturing sector has also increased–accounting for 11.3 percent of all manufacturing workers in 2015, up from 2.3 percent in 1989.

Manufacturers are working more with community colleges to create apprenticeship and training programs.

Ideally, you want to “train people how to learn rather than any specific skill because the technology related skills are changing all the time,” Bessen said.

After that, employers can train employees in the specifics on the job.

Many manufacturers say their industry has a perception problem.

“People just don’t think of us. They don’t realize we are there,” said Carolyn Lee, the executive director of the National Association of Manufacturers’ social-impact arm known as The Manufacturing Institute. “We can’t just hang up a help wanted sign and expect people to come to us.”

The Manufacturing Institute has done extensive outreach to high schools to raise awareness, most notably through their annual Manufacturing Day.

But they have an uphill battle. Many people are still scared that manufacturing is a dying industry after the layoffs of the Great Recession. Manufacturers have to convince potential employees that they will have long-term job stability if they want to attract new workers, Weaver said.

Editor’s note: The headline on this story has been changed to indicate the manufacturing industry says it is experiencing a “worker shortage,” not a “job shortage.”