The coalition moving Brexit forward is falling apart. What happens next?

Hours after British Prime Minister Theresa May announced that her Cabinet supported a draft agreement laying out the terms of the UK’s divorce from the European Union, two members quit, cutting short any victory lap.

May had hoped to get the full backing of her ministers before bringing the draft document to the British parliament next month for approval. The British government faces a tight deadline to finish an agreement by its Brexit departure next spring.

“Am I going to see this through? Yes.”

May said at a press conference on Thursday that the deal protects jobs and security, “brings back control of our money, laws and borders,” and fulfills the wishes of the British people. “Members of the public want the government to get on with delivering on Brexit for them. Am I going to see this through? Yes.”

At the center of the contentious process, May has had a very narrow window for making a successful deal that all sides could support. The announcement on Wednesday appeared to be a breakthrough — albeit one with hurdles to pulling it off — but has also brought new political tumult, raising questions about her future, as well as Britain’s.

What’s at stake and what happens now? Here’s a look.

The hard-fought and months-long negotiations with the EU have fractured May’s own Conservative Party government. In addition to Raab and McVey’s resignations, two other high-level officials, who believed May was too prone to compromise, resigned earlier this year: foreign secretary Boris Johnson and and Brexit secretary David Davis. Davis said in July that the UK was “giving away too much and too easily” to the EU.

May said on Thursday that she was sorry for the departure of her colleagues, but “I believe with every fiber of my being that the course that I have set out is the right one for our country and all our people.”

The departures demonstrate the extent of the division within her own party, and more resignations are expected, said Nile Gardiner, a former aide to British Prime Minister Margaret Thatcher who is now with The Heritage Foundation. “Her situation right now is very precarious.” 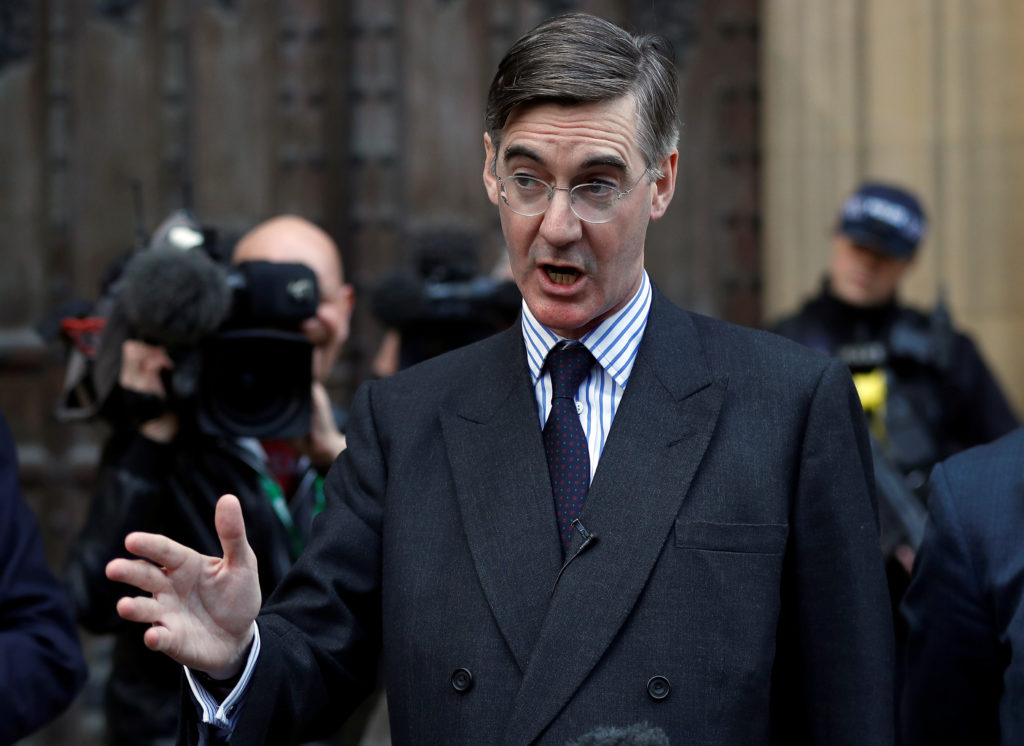 British Member of Parliament Jacob Rees-Mogg has sent a letter of no confidence in Prime Minister Theresa May. Photo by Peter Nicholls/Reuters

About a dozen members of the Conservative Party have sent letters calling for a no-confidence vote over May’s leadership. Once the number reaches 48, the party will be required to hold a vote for a new leader.

“Leadership is about making the right decisions, not taking the easy ones,” May said when asked about the possibility of a no confidence vote, and she emphasized that she was determined to stick to the deal.

What is in the preliminary exit agreement?

UK and European Union officials spent a year and a half working out draft terms for Britain’s departure from the EU.

A key portion of the 585-page draft agreement deals with what to do about the Irish border that separates Northern Ireland — which is part of the UK and therefore would exit the EU along with England, Scotland and Wales — and the Republic of Ireland, which would stay a member of the EU.

The EU wants to issue a UK-wide customs “backstop,” which would keep Britain inside the EU single market and guarantee no “hard border” — and separate rules for customs — across Ireland. But hardline Brexit supporters are concerned about the UK’s ability to later leave this temporary customs arrangement.

“I recognize that there are concerns about the backstop.”

Even if the arrangement were only in place while the EU negotiated a free-trade agreement with the UK, that process could still take years, said Michael Leigh, senior fellow at the German Marshall Fund of the United States. “The EU just negotiated an agreement of this sort with Canada, which took seven years” to approve, he said. “So that’s just an indication of how complex the matter is.”

“I recognize that there are concerns about the backstop,” May said on Thursday, but the European Union would not agree to a deal without it. “It acts as an insurance policy against the return to the borders of the past in Northern Ireland.”

Under the deal, Gardiner said, “Britain remains shackled to the European Union instead of breaking off completely,” which many view as “even a worse position than Britain is in right now.”

What is Britain’s status in the EU? 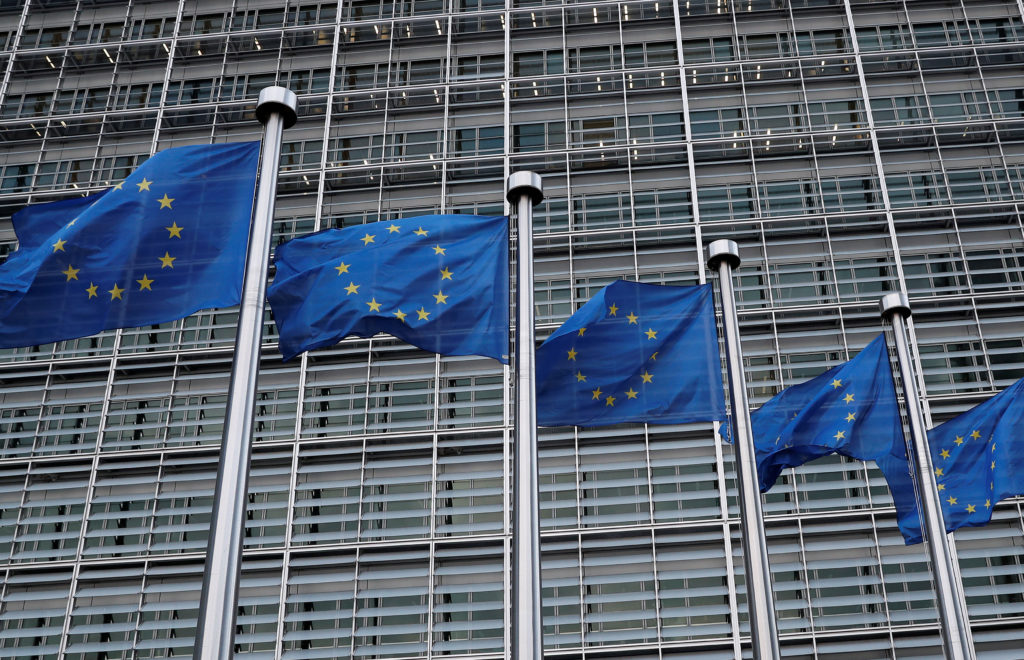 File photo of the EU Commission headquarters in Brussels, Belgium, by Yves Herman/Reuters

The UK has been a member of what is now the EU since 1973. The British people voted in a surprise outcome to leave the bloc in a 2016 referendum over concerns about retaining control over economic and immigration policies.

The results are subject to an ongoing investigation by the UK Electoral Commission, UK Parliament and U.S. Senate over whether Russia interfered with the referendum by posting inflammatory messages on social media to try to inflate the “leave” vote.

The UK faces a March 29, 2019, deadline to exit the European Union. May set the date last year when she sent a letter to the EU, officially announcing Britain’s departure. Under Article 50 of the Lisbon Treaty, the EU and a departing country have two years to negotiate the terms of its exit.

Even before Brexit, the UK had maintained a certain amount of independence by opting out of some of the EU’s common policies, like keeping its own currency rather than adopting the euro. The UK also has stayed outside of the Schengen Area, a zone that allows free travel without passports between 26 European countries.

Despite the Cabinet officials’ departures, the European Union still plans to take up the proposal at a summit called for Nov. 25, said EU President Donald Tusk on Thursday. EU members will have seven to 10 days to study and sign off on the agreement.

Once the EU accepts it, the British parliament could vote on the proposal in early December. A simple majority in the 650-seat House of Commons is needed for passage.

But approval in the House of Commons — if the agreement gets that far — seems unlikely, said Mujtaba Rahman, managing director for Europe at Eurasia Group. Euroskeptics will oppose the deal, because they say it detracts from UK sovereignty, and pro-European Union members of May’s Conservative Party will say the deal is much worse than full EU membership, he said.

One wild card is how the 10 members of the Northern Irish party – the Democratic Unionist Party, or DUP – will vote, Leigh said. “If it looks as though the special obligations imposed on Northern Ireland go way beyond what is imposed on the rest of the UK, then the Democratic Unionist Party might vote against it because they would say this is a step toward the breakup of the United Kingdom.”

“It seems highly unlikely that there would be a full-scale reversal.”

If the deal does not pass in its current form, British and EU officials could renegotiate its elements, but “it’s very unlikely there would be large structural changes made” to garner enough support, Rahman said.

Members of parliament could propose amendments to the withdrawal agreement, though they would be non-binding.

If the British government cannot approve any deal, Leigh said, “It seems highly unlikely that there would be a full-scale reversal, and that either the British parliament or the British public in a referendum would actually vote to remain after all in the EU.”

So deal or no deal, at this point Brexit will happen in March.

Left: Britain's Prime Minister Theresa May holds a news conference at Downing Street in London on Nov. 15. Photo by Matt Dunham/Pool via Reuters