Merle Hazard has a new song. This one’s about self-driving trucks

Merle Hazard is, as far as we know, the world’s only singing cowboy — singing about economics, that is. We love to feature his twinkle-toe takes on the much-hated college subject because 1) his songs are so funny, and 2) they so astutely encapsulate key issues in the dismal science, unsurprising since in the workaday world Merle is Jon Shayne, a sobersides Harvard-trained investment manager. 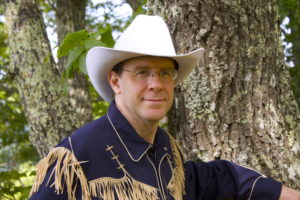 With this post, Making Sen$e debuts Merle’s newest effort to combine economic comedy and analysis: “Dave’s Song,” a ditty about self-driving trucks. With the news that a self-driving car has killed a pedestrian, Merle’s latest bid for both the Country Music Hall of Fame and a Nobel Prize in Economics couldn’t be much more topical.

Nor could it have a much more impressive musical pedigree. Performers include Grammy nominated guitarists Trey Hensley and Rob Ickes. Background singer Andrea Zonn tours with James Taylor. Drummer Larry Atamanuik is also the drummer for bluegrass-country singer Alison Krauss, and, incidentally, the father of Anthony Atamanuik, creator and star of The President’s Show on Comedy Central. And the song’s producer and banjoist is three-time Grammy winner Alison Brown, Jon Shayne’s college classmate, whose description of her own journey from investment banking to banjo artistry was featured on Making Sense here.