Not all candy is candy, at least for tax purposes

Halloween shoppers have many delicious decisions to make before trick-or-treaters show up at their doors. And in many states, those choices will change how much tax they pay.

Trying to distinguish between these two groups may be devilishly hard for shoppers, but to the Illinois Department of Revenue, the difference is simple. The first three treats are candy, and the second three are not.

I’m a taxation expert, and I have studied many aspects of state sales taxes. I have found that sales taxes can affect taxpayers, retailers and states in unexpected ways. Halloween offers a perfect window into the surprising difficulty of getting sales taxes just right.

Nationwide, sales taxes represent about a third of state revenue intakes. From the states’ perspectives, there is a lot to like about sales taxes.

States have a great deal of autonomy in crafting their sales tax codes, and taxpayers seem not to pay all that much attention to sales taxes, making sales taxes politically appealing sources of revenue.

Perhaps most importantly, vendors can be relied on to collect sales taxes, streamlining enforcement of the taxes.

People must buy food to survive, making it harder for low-income taxpayers to change their purchasing habits to avoid the sales tax burden. To address this concern, many state legislatures have chosen to reduce the sales tax rate that applies to sales of certain necessities such as groceries and medical supplies.

Illinois, for instance, lowers its sales tax rate from 6.25% to 1% for grocery purchases. Other states, like California, exempt groceries from their sales taxes all together. 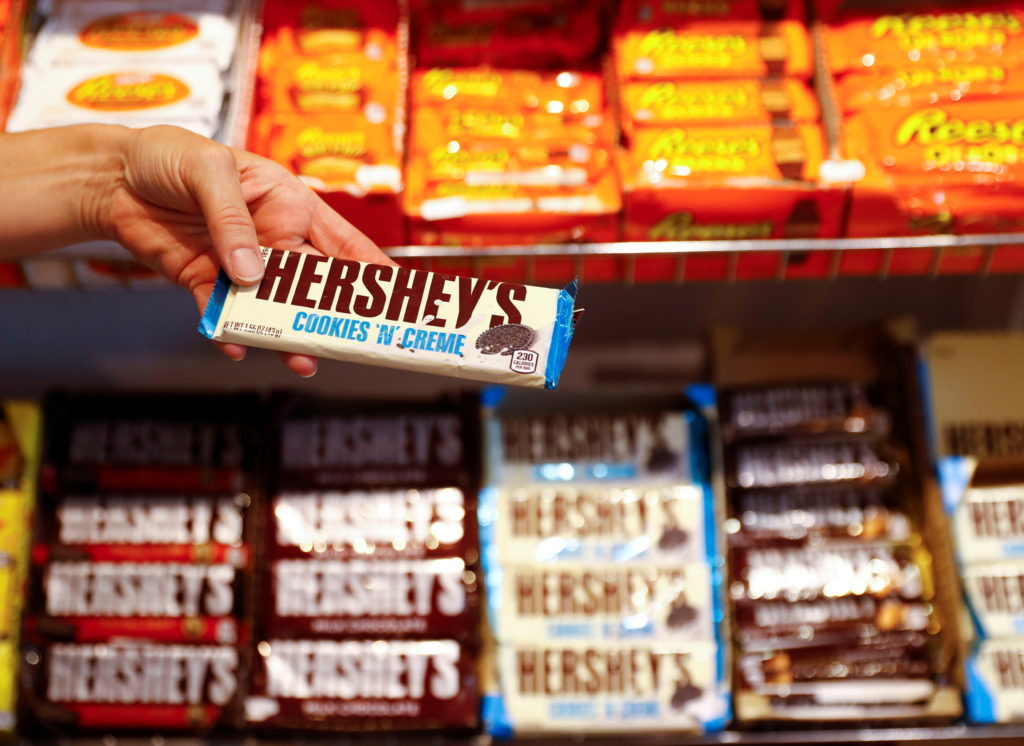 An employee shows a Hershey’s chocolate bar made in USA in the “American lifestyle” store in Berlin, Germany, August 13, 2018. Photo by Fabrizio Bensch/Reuters

Now, states like Illinois must figure out where to draw the line.

If “groceries” are eligible for lower sales tax rates, the states must define what foods qualify. Some foods, like eggs, milk and bread, are easy to categorize as groceries. Others, like alcohol and prepared meals, are easy to exclude – and often are subject to extra taxes beyond basic sales taxes.

But how does one deal with all the food in between those groups? For instance, is meat a necessity? If so, are steaks necessities?

One approach to this sorting problem is to list out in granular detail each food that counts as a grocery item, leaving the remaining foods to be taxed at the higher rate. Such a list would provide perfectly targeted tax relief, but would demand constant and costly updating as new products make their way into grocery stores.

Instead of a granular method, states often take a more generalized approach to drawing the line. Under that approach, groceries are defined as food for consumption off-premises – which essentially means the food is purchased to take home, not to be eaten on the spot – and everything else is not eligible for reduced sales tax rates.

Many states, like Illinois, go further and provide that certain categories of food, such as candy, also do not qualify as groceries.

These more generalized approaches sacrifice accuracy for ease of administration but ultimately demand further line drawing. When is food purchased for home consumption? What is candy?

States like New York sometimes look to preparation methods to determine when food is purchased for consumption at home or on the premises. Have your bagel from the local deli toasted, and the New York Department of Taxation and Finance concludes you will be dining in. Avoid the toaster, and you will be taking it to go and paying less sales tax.

Illinois defines candy as sweets and confectioneries, but not if flour is a listed ingredient.

Therefore, in some states that cookie crunch in your Twix is doubly satisfying. It feeds your sweet tooth while also getting you a sales tax break.

And, yes, Twizzlers and Hershey’s Cookies and Cream both have flour in them, too.

Hayes Holderness is an assistant professor of law at the University of Richmond.