How novel coronavirus could change the map on global manufacturing

Intensifying international concern about the toll and spread of the novel coronavirus is straining businesses that rely on goods made in China, even as they continue to deal with the fallout from the U.S.-China trade war.

When the outbreak began to gain attention earlier this year, Chinese factories and a number of stores were largely closed due to Lunar New Year celebrations. In an effort to stem further spread of the virus, the government then extended the holiday by more than a week, keeping businesses shuttered. But even after that period ended, employers have urged their workers not to come in or, if possible, to work from home.

Weeks later, many parts of China are slowly getting back to normal, but factories in Hubei province– the epicenter of the outbreak– remain offline. And all of the shutdowns related to the virus have contributed to businesses falling behind.

For companies that have become heavily reliant on China, COVID-19 could serve as a wake-up call.

Another report found that 94 percent of Fortune 1000 companies’ supply chains have already been affected.

Companies often have a few weeks worth of inventory stored in warehouses, but nearly two months after the virus was first reported to the World Health Organization, their stockpiles are dwindling.

Apple told investors last week that it did not expect to hit revenue targets because its iPhone manufacturing partners are located near Hubei province and it has taken longer than expected to get them back up and running.

And China is not the only country affected by the virus to pose a risk to global supply chains.

Italy is quarantining towns after more than 200 were confirmed there. And this weekend, South Korea–the United States’ sixth largest trading partner–raised its threat alert to the highest level, allowing parts of the country to be shut down in an attempt to stop the virus’ spread.

The risks and rewards of global supply chains

That allows businesses to cut down on costs because parts can be manufactured in one country, assembled in another and sold in yet another. The ease with which products can be shipped across the world also means companies do not have to warehouse large inventories, which creates an added expense.

The risk is that when the global supply chain is disrupted–most recently by the shuttering of factories due to the virus in China–many companies have few alternatives to fall back on. That is especially true of smaller and medium-sized companies that do not have operations in multiple countries.

For companies that have become heavily reliant on China, COVID-19 could serve as a wake-up call.

“There is no question in my mind that this outbreak will accelerate plans to diversify risks,” said Michael Dunne, the CEO of Zozo Go, a consultancy firm for automakers in Asian markets. 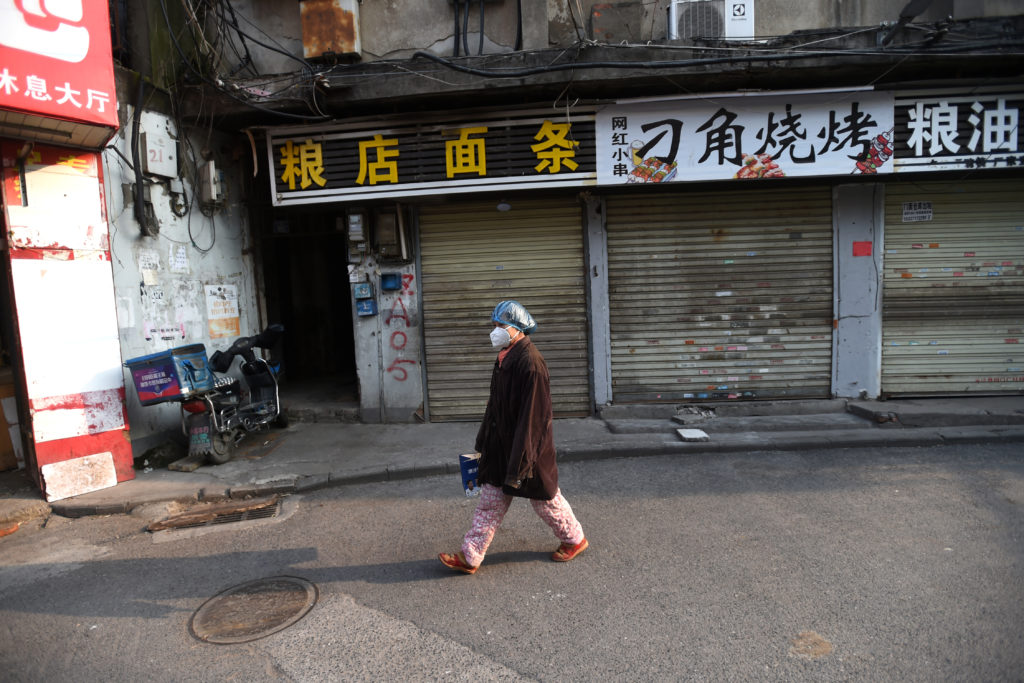 A resident wearing a face mask and a plastic cap walks past closed stores at a residential area in Wuhan, the epicenter of the novel coronavirus outbreak, Hubei province, China on February 23, 2020. While businesses in other parts of China are reopening, Wuhan remains on lockdown. Photo by Reuters

But so far, those companies do not appear to be making major shifts away from China.

Out of the more than 100 businesses surveyed by the American Chamber of Commerce in Shanghai only one expected to see manufacturing redirected outside of China.

That echoes companies’ responses to the tariffs placed on goods coming from China by the Trump administration.

Some companies have announced they are shifting their operations to other countries, largely in Southeast Asia. But most of those are in select industries, such as footwear and apparel, which have been moving out of China for years already because of increasing labor costs and regulations.

For other businesses, China is currently the only viable option. That nation still has a major advantage with its large population and government support.

“There is no China-sized production sitting, waiting to pick up these orders,” said Kristin Dziczek, vice president of the Center for Automotive Research.

Plus, many companies buy their products from other companies that subcontract to yet another company, so businesses often do not know the original source of all the parts in their products. Business consultants say if more companies required their parts to be easily traced, it would reveal how exposed they really are to risks in China and around the world.

Meanwhile, other nations are trying to step up. Taiwan has been trying to capitalize on the restructuring by offering low taxes for companies that relocate operations there. But risks and natural disasters like novel coronavirus can pop up anywhere.

Japan learned that lesson when it suffered the 2011 tsunami and Fukushima nuclear reactor disaster that caused severe disruptions to auto supply chains. And the next big outbreak of a new illness could begin in a country that does not have the resources to combat it.

“We believe that all countries are vulnerable,” Michael Ryan, executive director of the World Health Organization’s Health Emergencies Programme, warned during a news conference Monday that focused on whether the virus could take hold in Europe and other nations with developed economies. Investors are already worried that the rapid spread of COVID-19 will cause major disruptions in other major manufacturing nations or those with other economic significance. 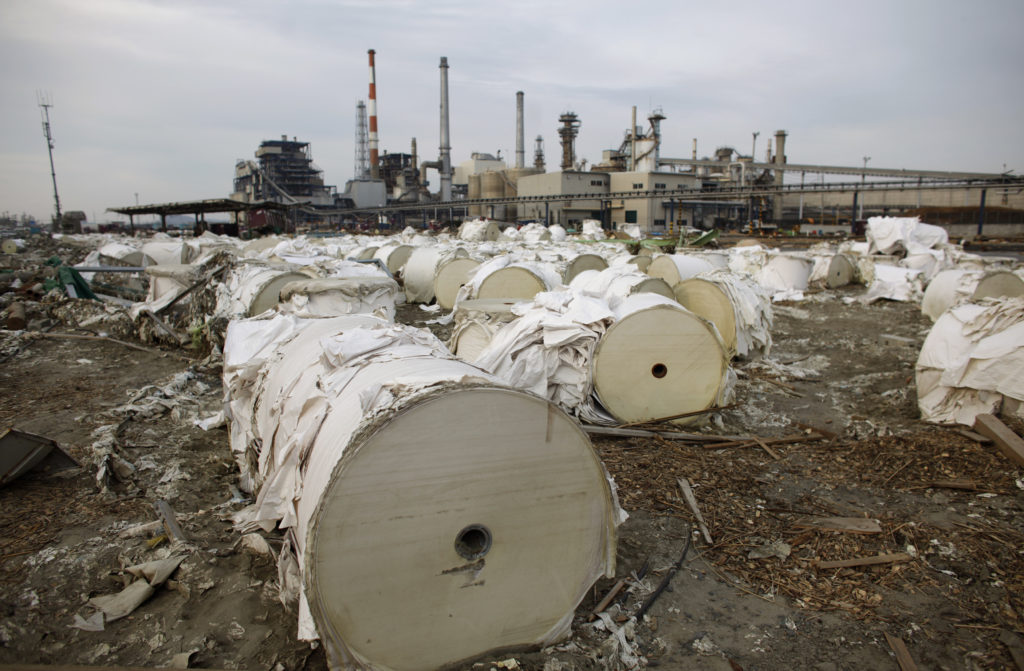 Rolls of paper from the Nippon Paper Company are seen destroyed by the March 11 earthquake and tsunami in Ishinomaki, northern Japan April 7, 2011. Many businesses were forced to find other suppliers when the tsunami and subsequent nuclear disaster disrupted supply chains in the region. Photo by Carlos Barria/Reuters

The lesson for companies is to diversify their supply chains whenever possible, so that if one location is hit hard, another can compensate.

“You can move out of China, but you could also move within China,” Mary Lovely, a senior fellow at the Peterson Institute and an economics professor at Syracuse University, said. Lovely pointed out that factories in Beijing, for example, are coming back online while those in Hubei province, the epicenter of the virus, are still on lockdown.

The question for some companies is likely to be whether the low cost of doing business with China is worth the uncertainty that comes with it. In part, that includes how China is handling the virus.

The question for some companies is likely to be whether the low cost of doing business with China is worth the uncertainty that comes with it.

In recent days, the Chinese government has come under increased scrutiny for what some see as an attempt to hide the true risks the virus poses to its own citizens and the rest of the world.

The White House has sharply criticized China for a lack of transparency surrounding its response to the virus, even as questions are being raised about how the Trump administration is preparing for a possible outbreak in the U.S.

In a speech Sunday, Chinese President Xi Jinping sought to allay fears about China’s efforts to contain the virus. China’s state-run news agency reported Xi emphasized the need for Chinese people to get back to work while still taking local health risks into consideration.

He called the virus outbreak a “big test” for China, and said the way it has been handled has proven “the notable advantages” of the Communist Party and Chinese socialism.

But Dunne said a lack of transparency could make companies less partial to doing business with a country like China than with other, more democratic countries.

“Calamities can happen at any time,” Dunne said. “What businesses bank on is whether we will get straight facts right away or whether there will be an obfuscation.”

Left: An employee wearing a face mask works on a car seat assembly line at Yanfeng Adient factory in Shanghai, China, as the country is hit by an outbreak of a new coronavirus, February 24, 2020. Photo by Aly Song/Reuters