The U.S. economy added 157,000 jobs last month, according to the Bureau of Labor Statistics, a solid figure but less than economists had predicted.

‘With such a tight labor market, you would expect to see larger wage growth.’

Economists had predicted a gain of 190,000 jobs. But the July jobs report revised May and June’s unemployment numbers upward, adding 59,000 more jobs than previously reported.

“We would have liked to see stronger growth but I don’t think it changes things as far as the strength of the overall economy goes,” said Dan North, the chief economist at Euler Hermes North America.

Here are key takeaways from the July jobs report.

Wages, which have remained stubbornly flat in recent years, are ticking up, but barely. They kept up with inflation in July, increasing by 0.3 percent.

“With such a tight labor market, you would expect to see larger wage growth,” North said.

The strongest wage growth is at the lower end of the wage spectrum, according to the Bureau of Labor Statistics data. “That tells me there is a lot of competition at the entry level of the labor market,” said Ziprecruiter Chief Economist Cathy Barrera.

North said wages would increase faster if companies were not struggling to find skilled workers. Instead of increasing wages to attract workers, employers are hiring less qualified workers at lower wages and then training them on the job, North said.

People are still joining the labor force. The labor force participation rate, which measures the number of people employed or currently looking for work, remained unchanged at 62.9 percent. 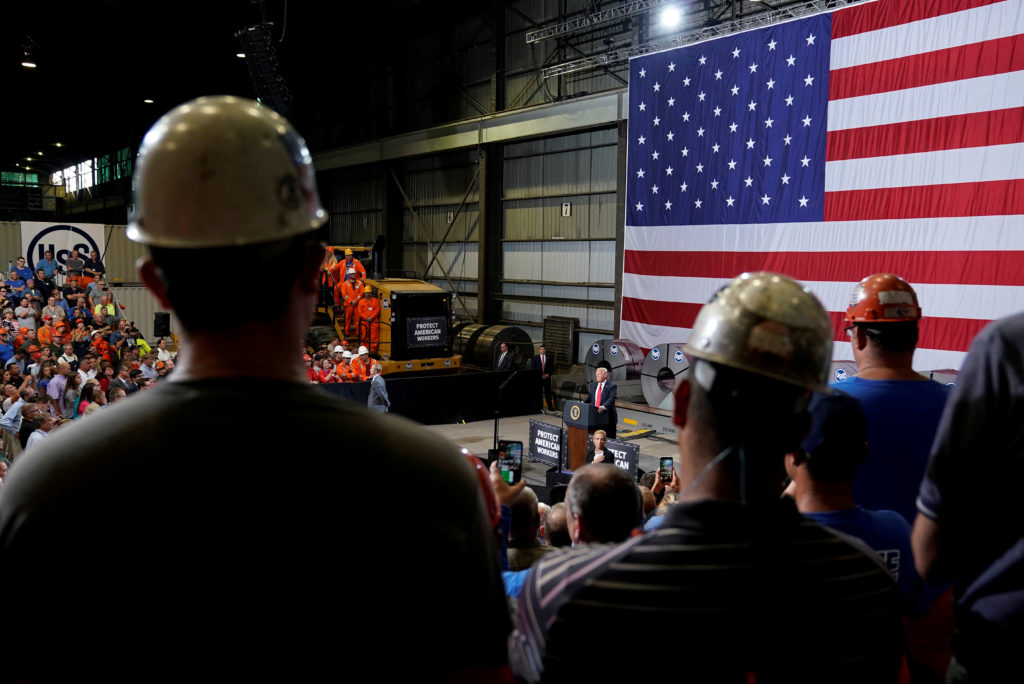 “These numbers are indicating there were still some people on the sidelines,” Barrera said.

That means there are workers available for employers to hire, even as the economy nears what is considered full employment. It also signals that people starting to look for work again have been able to find jobs, Barrera said.

Sectors with the most growth: The professional and business services sector added 51,000 jobs in July, more than any other part of the economy. The manufacturing sector saw a bump of 37,000 jobs.

Economists say it is too early to tell whether the Trump administration’s tariffs on imported steel and aluminum are having a significant effect on manufacturing jobs.

The tariffs are increasing prices for goods, said Mark Hamrick, a senior economic analyst at Bankrate.com, but the data does not yet show any change in hiring overall.

It’s too early to tell whether the Trump administration’s tariffs on imported steel and aluminum are having a significant effect on manufacturing jobs.

The hospitality industry also had a strong month, adding 40,000 jobs. That growth points to an uptick in discretionary spending, which typically boosts economic growth.

“Consumer confidence is at a 17-year high, but they haven’t really acted on it” until now, North said. “They are finally acting on their confidence.”

Get ready for interest rate hikes. The Federal Reserve is closely watching a host of economic data, including the latest jobs reports, as it decide whether and how quickly to raise interest rates.

Economists said the central bank still appeared on track to raise interest rates two more times before the end of the year.

What does that mean for your wallet? Interest rates on home and car mortgages are likely to increase, at least slightly in the coming months.

“It’s important for consumers to know that we are in a rising interest rate trajectory moment here, and they need to adjust their behavior accordingly,” Hamrick said.