The surprises behind this week’s big economic headlines

Several prominent economic reports have come out this week, providing valuable insights into the labor market and the economic well-being of American workers.

This morning, the Bureau of Labor Statistics released its monthly report on inflation, known as the Consumer Price Index for All Urban Consumers.

Inflation rose again in August by .02 percent, but given the volatility of month-to-month fluctuations because of statistical sampling errors, it’s best to look long-term.

The rate of increase over the past 12 months slowed to 2.7 percent, with energy, housing and transportation services have risen the most. Energy is up 10 percent over the year; transportation, 3.9 percent; housing, 3.4 percent.

Amazingly, at least to me, medical services were a tiny bit less expensive in August, but even if that’s a statistical monthly fluke, health care has risen a modest 1.9 percent year-over-year.

Here’s how the government weights the different elements of the consumer price index: 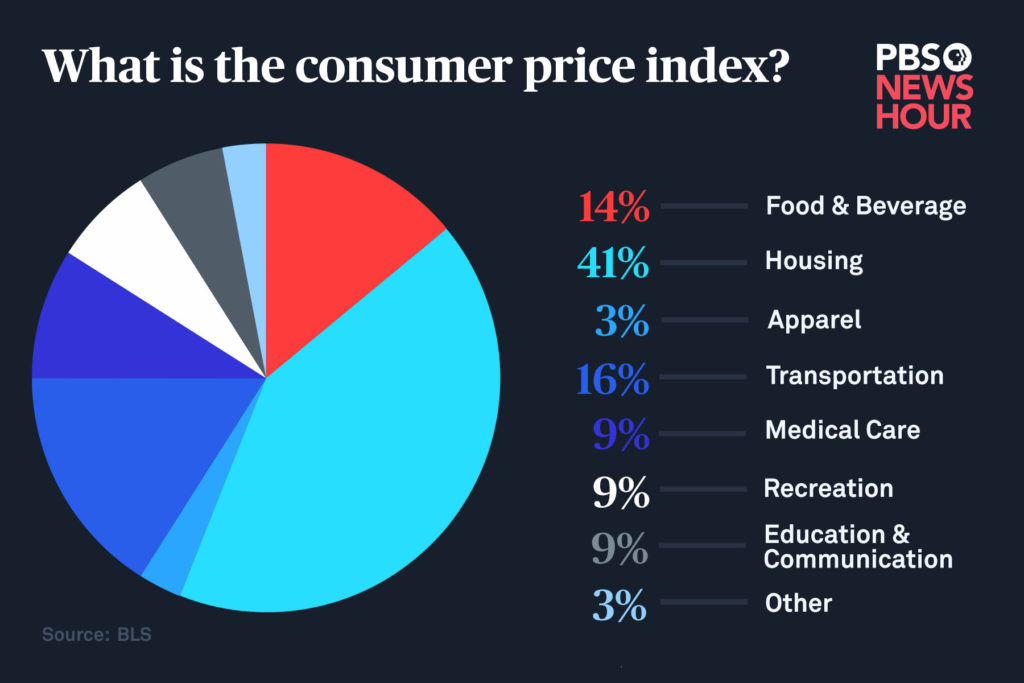 You can see what a big role housing plays. Energy is spread out over several categories.

Another report from this week was on income and poverty in the U.S., with additional data on economic inequality.

The headline story was the rise in real income for the median American household — the one right in the middle, with half of households earning more, half less. Inflation-adjusted. It rose by almost 2 percent. Not bad, it seemed.

We always caution against reading too much into any one month’s economic data, or even any one year’s. But looking deeper into the data, the median wages actually went down slightly, for men and women alike over the last year.

There’s the stagnation in real wages since the Great Recession you’ve likely read about. And as we reported on Monday, it hasn’t improved in the past 12 months either.

One more fact from the Census Bureau that confirms what has long been reported: American inequality continues to rise.

The most common measure of inequality is something called the Gini coefficient. From last year, it rose to 0.482 in the U.S. That’s about halfway between perfect income equality –.000, when everyone earns exactly the same amount — and complete inequality, 1.00, where one person owns it all.

For a bit of context, the current 0.482 number is higher than the latest World Bank estimates of income inequality for quite a few developing countries with famously high inequality, including Mexico and Nigeria.

By contrast, our incomes are far more unequal than those in developed countries similar to the U.S.. The World Bank’s latest Gini coefficient estimate for the UK is 0.332; for Germany, 0.317; for Sweden, 0.292; and for Denmark, whose people claim to be the happiest on earth, the Gini coefficient is 0.282.

The bottom line of all these reports? Prices are rising by nearly 3 percent. Wages are barely keeping pace.

We know, from both the Beige Book and our own reporting, that wage pressure is now growing. Will we soon see a take-off in the consumer price index as employers have to pay more and therefore raise their prices?

That’s what Eric Anderson, CEO of a Wisconsin machine shop, thinks. He’s just one person, but our interview with him certainly gave pause.

“Are we going to start to see now, a wage push inflation?” I asked.

“Yes,” said Anderson. “One hundred percent yes. We already are. A lot of poaching going on in our industry right now, and so we’re already seeing wage pressure. Companies that I was aware of, that paid significantly less, as early as last year, are now paying a lot to try to pull employees out of our facility, and other facilities. So yes, the answer is, it’s already begun.”

Left: A job seeker meets with a prospective employer at a career fair in New York City, October 24, 2012. Despite the economic recovery, workers today are paid less today than they were a decade ago, when earnings are adjusted for inflation. REUTERS/Mike Segar