What Americans should know about Saudi Aramco’s IPO

Global investors are closely watching oil giant Saudi Aramco as it launched the world’s largest initial public offering on Wednesday, with the hope that it will position itself as an even larger player in the global energy market.

The company, which is now considered the most profitable in the world, valued at more than $1.8 trillion, chose to sell its shares on Saudi Arabia’s stock exchange, the Tadawul. Because it did not list on international exchanges like the New York Stock Exchange for a variety of reasons, the most noticeable developments stemming from the IPO are likely to be contained within Saudi Arabia.

Analysts say the IPO itself is not likely to change Saudi’s oil production or output, so consumers shouldn’t see any many changes to prices at the gas pump because of the stock listing.

Still, Saudi accounts for 10 percent of the world’s oil production and is making major investments in other forms of energy. So the move is being watched closely by international investors and foreign policy analysts who are sensitive to any ripple effects it could have around the globe.

Here’s what U.S. consumers and investors need to know.

In the midst of the country’s growing budget deficit, the Saudi government is selling off 1.5 percent of its stake in the state-owned Saudi Aramco to raise $25.6 billion during the IPO.

The petroleum sector accounts for about 87 percent of Saudi Arabia’s budget revenues, according to the CIA World Factbook. Saudi Aramco has a monopoly on the nation’s oil, so the company’s profits account for a large share of the Saudi government’s budget. 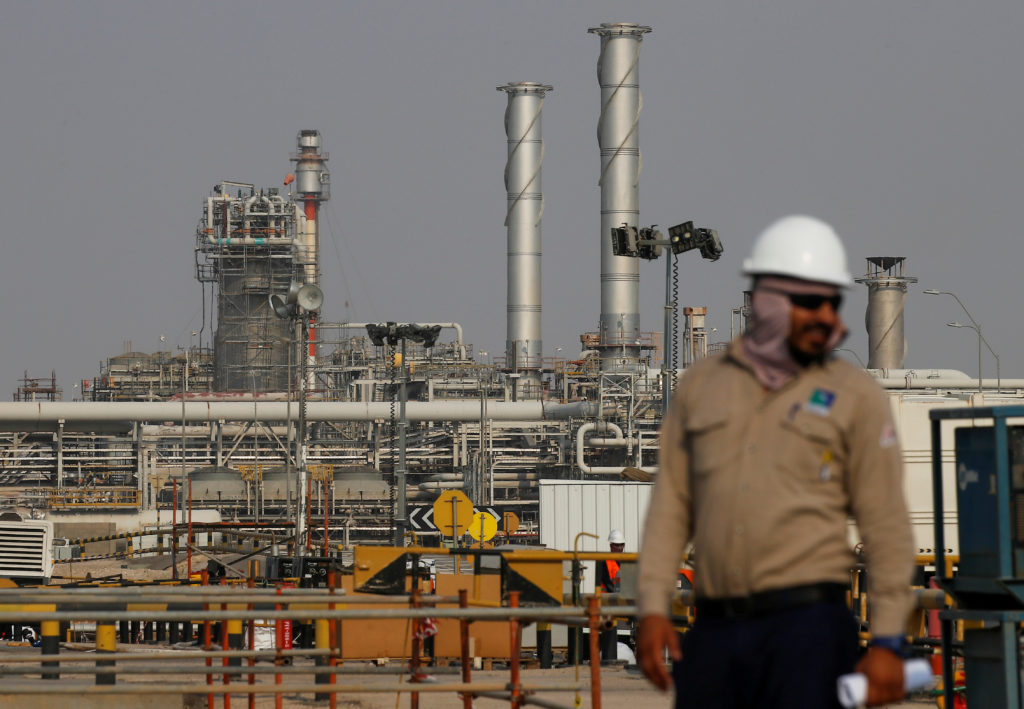 Even after selling its shares, the company will still be 98.5 percent government-owned. The company will have to take shareholders’ concerns into consideration, but analysts say the Saudi government will likely still call the shots.

“Saudi Arabia’s goal is to fund and look out for the best interests of the Saudi state and the Saudi royal family,” said Jim Krane, a fellow for energy studies at Rice University’s Baker Institute for Public Policy. “When that conflicts with the shareholders, the shareholders are going to have to take a backseat.”

Saudi Aramco’s investment in the U.S.

Saudi Aramco’s numerous business ventures, as well as its IPO, demonstrate it “is a national oil company that wants to become a global energy company,” said Karen Young, a resident scholar at the American Enterprise Institute who focuses on Middle East economies.

Saudi Aramco “is a national oil company that wants to become a global energy company.”

Much of Saudi Aramco’s expansion focuses on developing countries in Asia, where demand for oil is likely to grow in the coming years, but analysts see significant opportunity for the company in other markets, including in the U.S.

“The United States is a prime target for their investments and expansion especially when it comes to refining, petrochemicals and liquified natural gas,” said Anas Alhajji, an energy markets expert and the former chief economist of NGP Energy Capital Management.

Saudi Aramco already owns the largest oil refinery in the U.S., the Motiva Enterprises plant in Port Arthur, Texas. It also has research centers and technology offices in Boston and Houston, as well as a New York-based office that organizes scheduling, storage and transportation of crude oil in the U.S. and Canada.

Can and should Americans invest?

Saudi Aramco ultimately decided not to list on the New York Stock Exchange, reportedly because doing so could avail the company — and by extension the Saudi government — to lawsuits in the United States’ jurisdiction.

One of the most prominent lawsuits against the country is being brought by the families of 9/11 victims who claim the Saudi government was involved in the 9/11 terror attacks. A judgment against the Kingdom could negatively affect Aramco, but if it were trading in the U.S., the government and the oil company and their assets could be easily targeted.

Listing on the New York Stock Exchange would also mean that the company would have to disclose significantly more information and hold it accountable to U.S. federal oversight through the Securities and Exchange Commission.

Saudi Aramco could still list on an international stock exchange in the future. Right now, it appears the company is leaning toward listing in Tokyo’s exchange. It is shying away from other major exchanges in London because of Brexit and Hong Kong because of the instability associated with the ongoing anti-government protests.

Even though Saudi Aramco isn’t being listed on an international exchange, Americans who own mutual fund shares could soon be invested in the company if it is added to emerging market fund indices, as expected later this year. The amount of investment there, however, is likely to be small since the indices are comprised of numerous companies across several emerging market countries, such as Russia and China.

Some U.S. financial advisers have expressed interest in buying shares in Saudi Aramco if they become more publicly available, in part because of its reputation as a highly efficient and profitable business, while other investors warn of the instability that comes with the geopolitical risks in the Middle East.

In documents related to its IPO, Saudi Aramco said there are risks associated with its ownership by the Saudi government.

“The Government may direct the Company to undertake projects or provide assistance for initiatives outside the Company’s core business, which may not be consistent with the Company’s immediate commercial objectives or profit maximisation,” the company wrote.

There are also dangers posed to the stability of the country due to the tumult in the region. In September, due to an ongoing conflict between Saudi Arabia and neighboring Yemen, Yemeni rebels targeted a Saudi Aramco facility in a drone attack. However, the speed at which it was able to recover from the attack gave investors confidence in the company’s ability to weather setbacks. 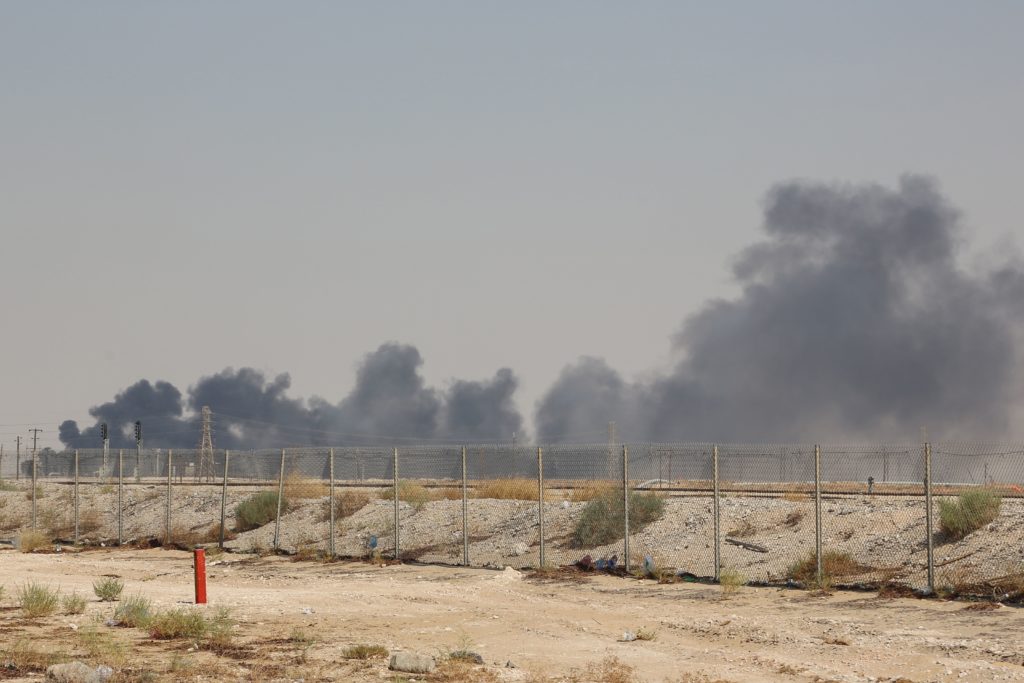 Smoke billows from an Aramco oil facility in Abqaiq about 60km (37 miles) southwest of Dhahran in Saudi Arabia’s eastern province on September 14, 2019. – Drone attacks sparked fires at two Saudi Aramco oil facilities early today, the interior ministry said, in the latest assault on the state-owned energy giant as it prepares for a much-anticipated stock listing. Yemen’s Iran-aligned Huthi rebels claimed the drone attacks, according to the group’s Al-Masirah television. Photo by /AFP/Getty Images

Alhajji points out that oil companies have a history of operating in “risky” regions, but that even developed nations like the U.S., whose priorities can drastically change after presidential elections every four years, can present another kind of threat.

Still, some people see investment in the kingdom’s oil company not as a financial choice, but a moral one.

Finances aside, they argue investing in Saudi Aramco is immoral because of its affect on climate change.

Others say investing in a company so closely linked to the Saudi government could amount to an endorsement of human rights abuses. Last year, dozens of investors pulled out of a major economic summit in Saudi’s capital, protesting the killing of Saudi journalist Jamal Khashoggi, who was writing for the Washington Post at the time of his death.

A CIA report concluded that Saudi Crown Prince Mohammad bin Salman had ordered Khashoggi’s murder. Since then, many investors have resumed business with the country, drawn by vast economic opportunities.

How the IPO plays into climate change

Saudi Arabia said Monday the kingdom is reinvesting the money it makes from the IPO into other forms of revenue.

At the moment, iIt’s unclear what those other revenue channels would be, but by diversifying its assets, the Saudi government hopes to shield itself from any anticipated downturns in the oil industry.

“The U.S. should want financial stability in Saudi Arabia, and if the IPO helps them get that, that’s a good thing,” said Marianne Kah, an adjunct senior research scholar at the Columbia University Center on Global Energy Policy.

There is one clear threat to Saudi Aramco, and, by extension, the Saudi government: climate change.

The IPO is “a hedge for climate action,” Krane said. “If we start to see more, stricter policies on climate from big governments that really affect oil demand, the Saudis need to be prepared for that.”

It has already invested in other forms of energy, including solar and wind.

The IPO is simply the next step in the company’s plan to shield itself from a decline in demand for its oil because of climate change.