What history teaches us about the latest stock market plunge

The stock market took another dive on a shortened day of trading Monday with the Dow Jones Industrial Average dropping 2.91 percent, the S&P 500 declining 2.71 percent and the Nasdaq falling 5.14 percent. All three major indices have fallen more than 20 percent from their recent peaks, officially entering bear market territory.

So now, it’s time to put the current stock market swoon in perspective – historical perspective, that is. There is a long stock market history to look back on for context, though I add the usual proviso, echoing the late screenwriter William Goldman’s remark about Hollywood, that “nobody knows anything” about the future and for all I know, the stock market will be up by the time you are reading this, not down.

Robert Shiller, who won a Nobel Prize for his research on markets, has been keeping a chart on the long-term performance of stocks for many years now.

Shiller employs a traditional measure of stock valuation, the price earnings ratio. That ratio is the price of stocks in relation to their companies’ profits. But he uses earnings over the previous decade instead of only one year to adjust for the cyclical ups and downs of any particular year or two.

The result is what he has termed the CAPE — Cyclically Adjusted Price Earnings ratio. 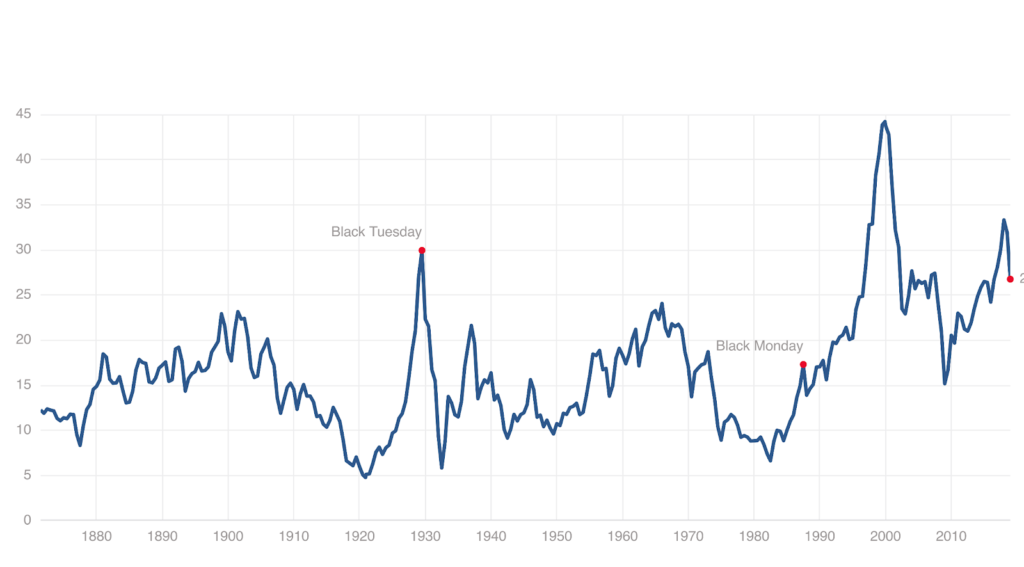 Inspecting the chart, the CAPE’s all-time high is starkly apparent: 45:1 in early 2000, just before the dot-com dive. The second steepest drop is the notorious Crash of ‘29, after which the Dow shed 90 percent of its value (between October of 1929 and March of 1933, when President Franklin Delano Roosevelt took over from Herbert Hoover.) The next biggest plunge: the Crash of ‘08.

But here’s what I hadn’t realized until I looked closely today. The Crash of ‘08, which dragged the Dow down from above 14,000 to 6,600 or so, merely brought the market back to its historical average of around 16. And yet think how traumatic that freefall seemed at the time!

So here’s a question I’ve been pondering: How are today’s stock investors going to react if the market continues to plummet?

Some of the younger investors have never known a bear market and maybe unprepared for one, financially and emotionally. And even the ones who can remember may be more focused on the idea of what goes down must go up and may be similarly shaken.

Moreover, some 10,000 Baby Boomers are hitting retirement age every day. While 25 percent of them continue to work past the age of 65, the other three-quarters do not. They must be relying on Social Security and/or their own private pensions, plus their savings.

It’s a powerful force fueling all downturns, including this one: unsettled minds, and now algorithms, feeding on themselves.

The problem is most of Americans’ savings are stowed away in 401(k) or similar tax-protected investment accounts, and some significant chunk of those accounts are invested in stocks.

Now at age 70 and a half, seniors are obliged to withdraw 3 to 4 percent of that money every year and pay taxes on it. The tax money alone means a small net disinvestment in stocks. But if the market continues to drop, are retirees likely to reinvest the balance in stocks?

I have to remind myself, and you, that most market trading is done by computer programs (aka “algorithms”) these days. So the bigger question may be: Is there a tendency in those programs to do as humans do? That is, do the algorithms tend to move with the crowd, buying when stocks are going up, selling when they dive?

The great investment sage Warren Buffett wrote in his annual shareholder letter in 2017 that when investing, you should listen to the poet (and, Buffett neglected to note, imperialist spokesperson) Rudyard Kipling.

If you can keep your head when all about you are losing theirs …
If you can wait and not be tired by waiting …
If you can think – and not make thoughts your aim …
If you can trust yourself when all men doubt you …
Yours is the Earth and everything that’s in it.

“There is simply no telling how far stocks can fall in a short period,” wrote Buffett in explaining the Kipling quote. “Even if your borrowings are small and your positions aren’t immediately threatened by the plunging market, your mind may well become rattled by scary headlines and breathless commentary. And an unsettled mind will not make good decisions.”
Buffett reminded his shareholders, so many of whom have become wealthy by investing in him over the decades, that “No one can tell you when [market reverses] will happen. The light can at any time go from green to red without pausing at yellow.” [Italics are Buffett’s.]

That’s a powerful force fueling all downturns, including this one: unsettled minds and now algorithms, feeding on themselves. But when you look at Shiller’s CAPE, how can any of us know if the decision to sell at the moment is “good” or not? Even Buffett is not going to live forever. And for those of us with a shorter time horizon than the median American — age 38 at the moment — quitting stocks may seem the prudent thing to do. If enough of us do, it will be a self-fulfilling prophecy.

Left: A trader works on the floor at the New York Stock Exchange on Dec. 4, 2018. File photo by REUTERS/Brendan McDermid