With the closing bell, U.S. stocks on Wednesday marked what is being considered the longest bull market in history: 3,453 days.

The S&P 500 bottomed out in March 2009 after the U.S. financial crisis. Since then, stocks have grown by more than 300 percent.

The historic mark is largely symbolic, but it does provide investors a chance to reassess the market’s long-term health and re-evaluate their strategies moving forward.

What is a bull market?

A bull market is the trend of stocks rising. It is the opposite of a bear market, when stocks are falling.

Generally, a market is considered to have turned from a bull to a bear market when stocks lose more than 20 percent of their value.

A drop that large has not happened since 2009, even though the market has experienced some volatility.

In February, the Dow Jones Industrial Average saw the largest one-day drop in its history when it shed 1,175 points, or 4.6 percent. 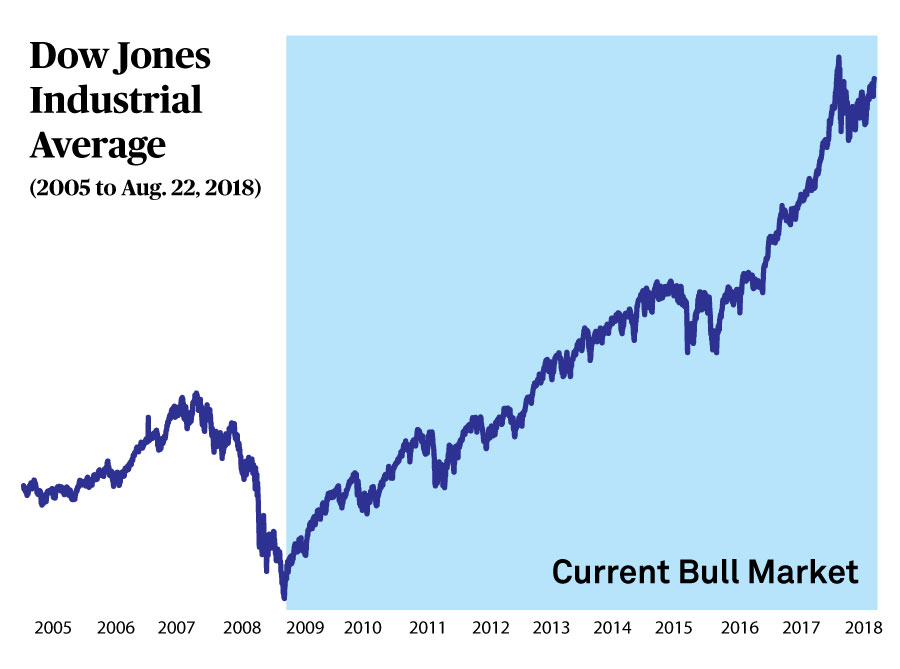 With that exception, “volatility has been surprisingly low,” said Vikram Mansharamani, the author of Boombustology: Spotting Financial Bubbles Before They Burst.

He attributes the market’s steady nature to passive investing, a strategy that tries to maximize return by reducing the number of daily or short-term trades. Investors instead attempt to match the long-term trend of indexes like the Dow Jones Industrial Average.

Volatility aside, on the whole, the stock market has been performing well. That is because bull and bear markets are defined by longer trends instead of daily stock moves.

(Fun fact: It is unclear where the names for bull and bear market originate, but one of the most popular theories is that they are based on how bulls and bears attack–a bull thrusting its horns upward versus a bear swiping its paws down.)

Should we expect a downturn soon?

Just because the U.S. has experienced a bull market for so long, it does not mean a bear market is on the horizon.

“All market cycles do come to an end, but when you look at the fundamentals of the economy, they are still strong,” said Tony Drake, a certified financial planner and CEO of Drake & Associates.

One reason this bull market might last longer is it started from such a low point. In 2009, stocks had lost more than 50 percent of their value. The Dow Jones Industrial fell to its lowest since 1997.

That means, the stock market had plenty of room to grow, and despite passing pre-recession levels, could still have room to run.

Stability itself generates instability. It lulls people into expecting steady returns and underplays risks until they become so overwhelming that there is a total reversal.

On the other hand, Mansharamani warns that complacency can be detrimental.

“Stability itself generates instability,” Mansharamani said. “It lulls people into expecting steady returns and underplays risks until they become so overwhelming that there is a total reversal.”

So far, the markets have shrugged off a number of risks, including tariffs, currency battles, rising interest rates and political turmoil in the Trump administration.

On Wednesday, the Dow Jones and S&P 500 dropped slightly, presumably on the news that President Donald Trump’s former personal lawyer Michael Cohen pleaded guilty to federal crimes and the former Trump campaign chair Paul Manafort was convicted on eight counts of tax fraud. But the drop was minimal and the other major index, the NASDAQ, ended higher for the day.

And one more important note. The old adage still rings true: The stock market is not the economy.

So even if the economy is doing well, the stock market does not always follow suit.

Should you change your investments?

First, it is important to point out that only 55 percent of Americans have investments in the stock market, so if the stock market is doing well or poorly, many people’s finances are not affected directly.

Second, for those who do hold stocks, every investor is different, so financial advisers say people should always evaluate their plans on a case-by-case basis.

That said, Drake said older Americans should follow the generally accepted advice of taking on less risk, by moving more money into bonds over stocks for example, since they will need to start extracting some of their investments in the near future.

Younger Americans, on the other hand, will likely go through several more bull and bear markets before they take out their retirement savings, so they need to make investments based on the long-term.

However, there is one thing younger investors could do in case there is a correction soon.

“It’s great to have some cash on the sidelines and think of it as a sale,” Drake said. “Put in money as it’s going down because we know it’s going to rebound at some point.”