Venezuela knocks 5 zeros off its currency. Will anything change?

In an effort to curb soaring inflation in Venezuela, President Nicolas Maduro shaved five zeros off the value of the bolivar and raised the minimum wage by 3,500 percent. But analysts are saying the measures won’t do much until Venezuela makes some deep, institutional reforms.

The International Monetary Fund has warned that Venezuela’s inflation could top 1 million percent this year. Venezuela is “in a state of economic collapse,” Maurice Obstfeld, economic counsellor and director of the research department at IMF said in July. “We’re seeing a hyperinflation that is rivaled only by Zimbabwe.”

Venezuelans, struggling with skyrocketing prices and food shortages, are pouring into neighboring countries to survive. Since 2016, almost 2 million people have fled the country and 87 percent of families reportedly live below the poverty line. In Ecuador alone, more than 500,000 Venezuelans have arrived since the beginning of the year in “one of Latin America’s largest mass-population movements in history,” according to the United Nations.

What will Maduro’s latest measures do and will they be enough to rein in the country’s hyperinflation? We asked several analysts. 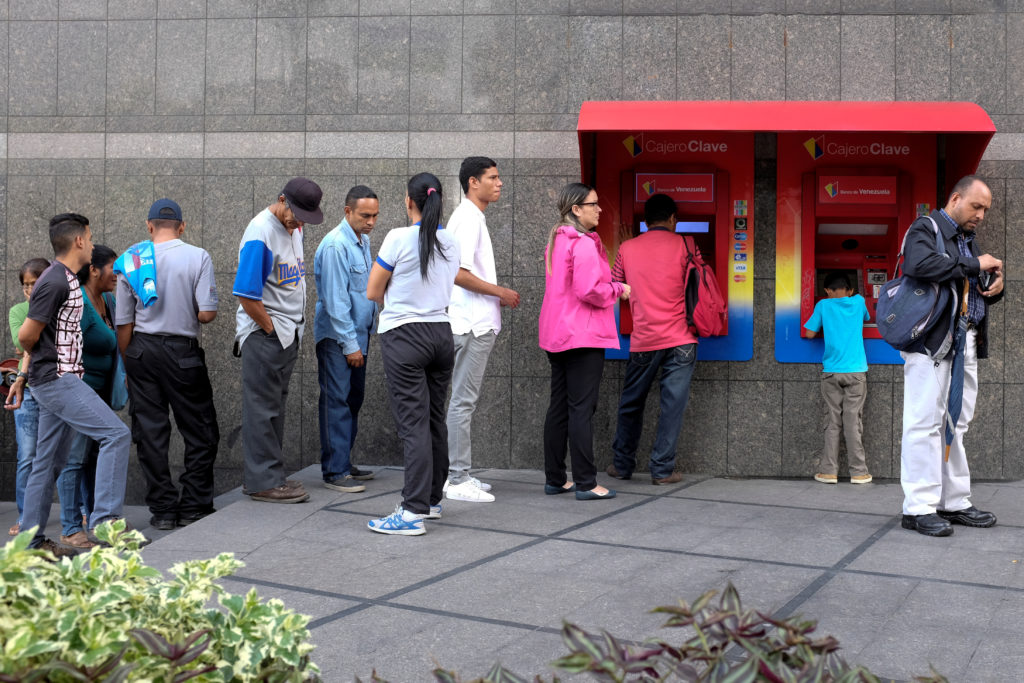 “All of a sudden, Venezuela didn’t have the resources it once had, and it had lots of bills from previous imports,” said Peter Hakim, president emeritus and senior fellow at the Inter-American Dialogue. Venezuela also was sending billions a year in oil and cash to Cuba and other countries in South America, buying arms from Russia, and trying to develop trade relations with China. “In other words, it was operating on a strong ideological basis,” using its capital and oil revenues.

In order to pay the bills and its government employees, Venezuela began printing more money. “When you print money and there’s nothing behind that money – international confidence, national confidence – prices begin to rise,” he said. Venezuelans scaled back to two meals a day and began bartering food and other goods for services, such as haircuts. 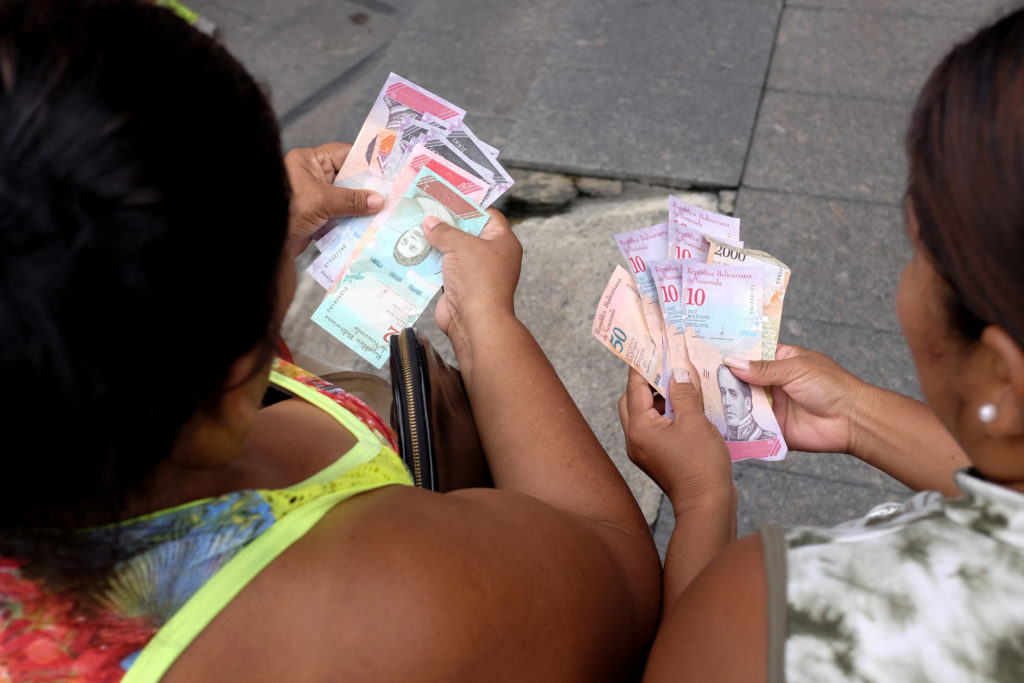 Women count their money in Caracas. Photo by Marco Bello/Reuters

What economic changes did Maduro announce?

Maduro said last weekend that, among other measures, he would knock five zeroes off the currency.

Slashing zeros is an action governments often take when they are dealing with hyperinflation, said Monica de Bolle, senior fellow at the Peterson Institute for International Economies. When prices are so out of control, it helps put them back into perspective, but “it doesn’t do anything to the hyperinflation itself.”

Unless the Venezuelan government puts reforms in place to address the underlying problems that are leading to hyperinflation, prices will continue to skyrocket “and then maybe in a few months he’s going to slash more zeros,” she said.

Maduro also devalued the bolivar by 95 percent to help boost exports, and pegged the new currency to the government’s cryptocurrency, the petro, which is tied to oil prices. “He’s hoping that that will bring some credibility back to the bolivar and will help with containing the hyperinflationary process,” De Bolle said.

In addition, Maduro raised the minimum wage by 3,500 percent. Employers now are expected to pay employees 180 million bolivars a month rather than 3 million, or $30 versus 50 cents. Maduro said the government would cover the first three months of the wage increase for small and medium-sized companies. Venezuela has announced minimum wage increases several times a year to try to keep pace with the depreciation of the bolivar.

The moves are meant to restore people’s confidence in the new currency and signal to business owners that they do not have to keep raising prices to make sure they cover the costs of their imports and workers, Hakim said.

However, “it does not put any more real currency into the hands of the people of Venezuela. It doesn’t put more money in the hands of the government,” he continued. “They still have to purchase most foodstuffs, most medical supplies, most spare parts, etc. from abroad, and they don’t have the money to do that.” 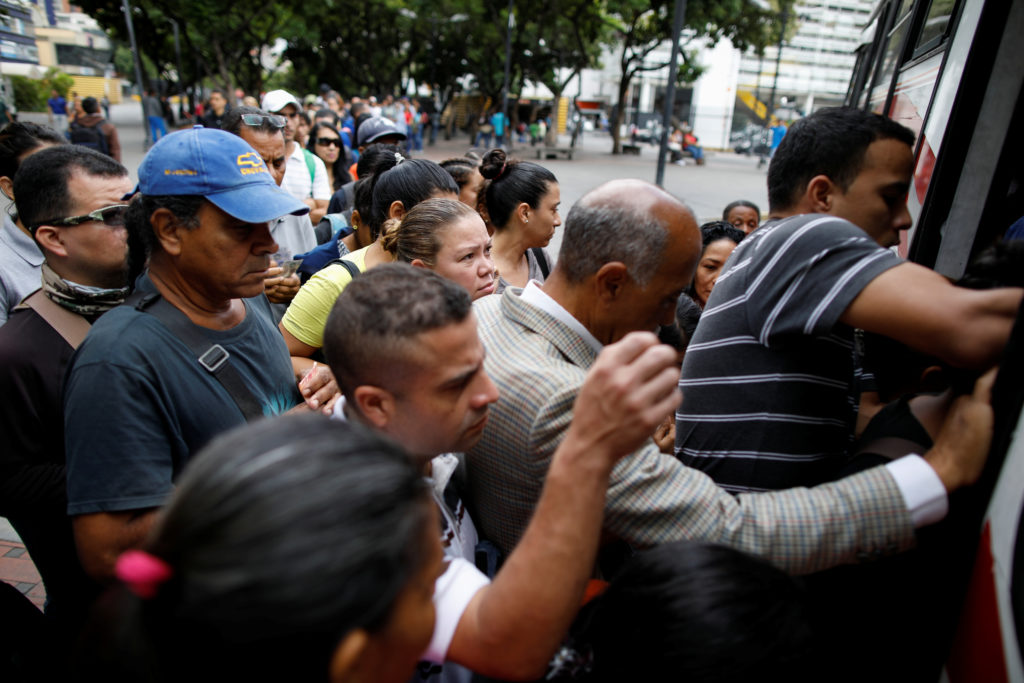 People line up for a bus to leave Caracas. Photo by Carlos Garcia Rawlins/Reuters

Once hyperinflation begins, it takes off quickly, and requires drastic measures to brake, De Bolle said. Zimbabwe, which experienced record hyperinflation in 2008, only brought its inflation under control when it got a package of international assistance from the IMF and World Bank, undertook deep reforms and abandoned its own currency in favor of the dollar, because “nobody believed in the Zimbabwean currency anymore,” she said.

Maduro has not indicated that any similar package of deep reforms is in the works, and the analysts said they expect him to continue announcing measures aimed at buoying the bolivar but not addressing the institutional failings that led to the erosion of the currency’s value in the first place.

“Changing the currency reveals the government’s — and the people’s — desperation, but doesn’t solve any of the fundamental problems.”

Venezuela also has enormous debts to China and other countries, and at some point will be unable to pay those debts, Hakim said.

So far, Venezuela has rejected the international community’s offers of food, medicine and other supplies, he added. “There’s no question that the Venezuelan economy is as near to collapse as we’ve seen in an economy, and they will need external help to get back on their feet.”

Venezuela is not in any position to receive international financial assistance, said De Bolle. “In fact, it’s the opposite – it’s under sanctions.”

Even if the currency stabilizes, “the economy is crumbling due to decimated infrastructure, the inability to find basic parts and products, and the exodus of millions of Venezuelans from the country,” said Shannon O’Neil, senior fellow for Latin America Studies at the Council on Foreign Relations.

“Changing the currency reveals the government’s — and the people’s — desperation, but doesn’t solve any of the fundamental problems,” O’Neil said. “So expect continued decline and hardship in its wake.”