Mistakes: Paul Krugman’s, Greg Mankiw’s (And My Own) 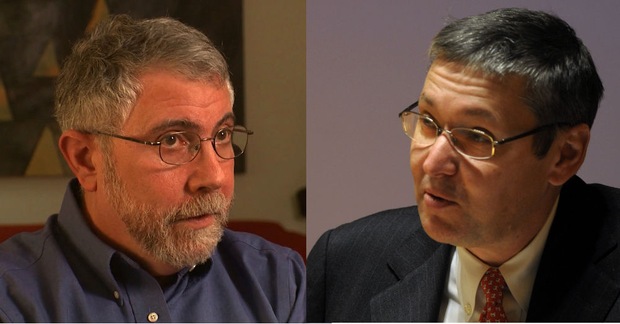 Paul Solman: Both Paul Krugman, of MIT, and Greg Mankiw, of Harvard, were teaching economics locally during my formative years as an economics correspondent. I came to know them long ago. Relations between us have seemed cordial enough, as best I could tell.

Krugman has been on the left, relatively speaking; Mankiw, generally on the right. They have been reliable and clear spokespeople for their respective points of view.

But to describe their relationship, at least intellectually, cordiality would not be the word of choice. I was reminded of this by a post on Greg’s blog on Christmas Eve entitled “A Krugman Puzzler.”

“I often disagree with Paul Krugman,” it began, “but I usually understand him. Lately, however, I have been puzzled about his view of the bond market.” That was because Krugman had dismissed, in a post of his own, the fear of “bond vigilantes” intent on punishing the US for mounting deficits and debt by demanding higher and higher interest rates to lend us money — i.e., buy our Treasury bonds.

But in 2003, added the puzzled Mankiw, Krugman had written just the opposite:

[L]ast week I switched to a fixed-rate mortgage. It means higher monthly payments, but I’m terrified about what will happen to interest rates once financial markets wake up to the implications of skyrocketing budget deficits…my prediction is that politicians will eventually be tempted to resolve the crisis the way irresponsible governments usually do: by printing money, both to pay current bills and to inflate away debt.

And as that temptation becomes obvious, interest rates will soar. It won’t happen right away… But unless we slide into Japanese-style deflation, there are much higher interest rates in our future.

And here’s Mankiw in conclusion:

I am having trouble reconciling these points of views. Has Paul changed his mind since 2003 about how the bond market works? Or are circumstances different now? If anything, I would have thought that the fiscal situation is more dire now and so the logic from 2003 would apply with more force. I am puzzled.

Well, he probably shouldn’t be. In 2003, Krugman was explicitly writing in opposition to the costs of a new war in Iraq, coupled with the substantial tax cuts of George W. Bush, which Mankiw, as head of the President’s Council of Economic Advisors, championed. Mankiw presumably finds Krugman two-faced with regard to bond vigilantism, based on his politics, but “puzzled” would presumably mean that he never checked with Krugman who, when I emailed him, referred me to his archives, which include a September 2010 column on “Mistakes” he’d made over the years.

In the column, Krugman wrote the following:

I wrongly believed that markets would look at [the Bush tax cuts, war efforts and Medicare drug expansion, and]… lose faith in American governance, driving up interest rates on our debt. Instead, bond investors discounted the politics, and acted as if they believed that America would eventually pull itself together and start behaving responsibly. The jury’s still out on that, but clearly my short-run prediction proved wrong.

Also easy to find was a citation from BusinessInsider.com back in July, where Krugman was also unequivocal:

My thinking has evolved. If you haven’t updated your views in the face of new experiences, you’re not doing your job.

What I like about this story is that even Paul Krugman, known for his tenacity or, detractors would say, blind stubbornness, is sometimes wrong, knows it, and is willing to acknowledge it.

I would like to take this end-of-the-year occasion, then, to admit to mistakes I can remember, despite my unconscious’ valiant efforts to bury them:

“Alan Greenspan has never started a company, never created a job. He’s been an academic all of his life.”

Not so. In fact, Greenspan ran his own consulting firm for years. The show made the correction, on air.

No he didn’t. Actually, the quote turns out to be “You cannot help the poor by destroying the rich” and was coined, it seems, by a conservative Presbyterian minister, William John Henry Boetcker (1873-1962), whose “The Ten Cannots,” first published in 1916, included this one (“Cannot” #5).

Republished as a leaflet by a conservative organization in 1942 with Lincoln quotes on the reverse side, the quote has often been mis-attributed to the president. Most famously, it was used by a later president, Ronald Reagan, at the 1992 Republican convention, inveighing against his misguided Democratic opponents. But you’d never have known if you had just seen the Epstein interview.

Longtime viewers are encouraged to send in gotchas I’ve missed.

Meanwhile, it seems only fitting that, having triggered this round of mea culpas, Greg Mankiw should be allowed to conclude it.

In 1990, he published a paper called “The Baby Boom, The Baby Bust, and the Housing Market,” in which he and a co-author found “the major cause of the increase in real housing prices in the 1970s,” when they roughly doubled, to be “the entry of the Baby Boom generation into its house-buying years. Since the Baby Bust generation is now entering its house-buying years, housing demand will grow more slowly in the 1990s than in any time in the past forty years.

“If the historical relation between housing demand and housing prices continues into the future, real housing prices will fall substantially over the next two decades.”

Since real housing prices actually rose again by more than half, even including the crash, I emailed Mankiw to ask if he had ever corrected his wrong-way call or, if not, if he wished to now. He wrote back that he and co-author David Weil “have not revisited that paper.”

As for Krugman and his admission of error with respect to the bond vigilantes, Mankiw wrote: “I am not sure this really resolves my Krugman puzzler. It is not so much that his short-run prediction from 2003 proved wrong but that he now says that scenario is impossible.”

“By the way,” he added, “the reason I started thinking about this issue of bond vigilantes is that I refer to this possibility in my column in Sunday’s NY Times. I don’t think the interest rate spike is imminent, but I don’t understand how Paul can now believe it is unthinkable, as he appears to. In other words, what puzzles me is not that Paul made a wrong forecast but that he now seems to be invoking some kind of logical argument that purports to rule out the possibility unequivocally.”