New Nobel Economist Robert Shiller on the Insanity of Markets 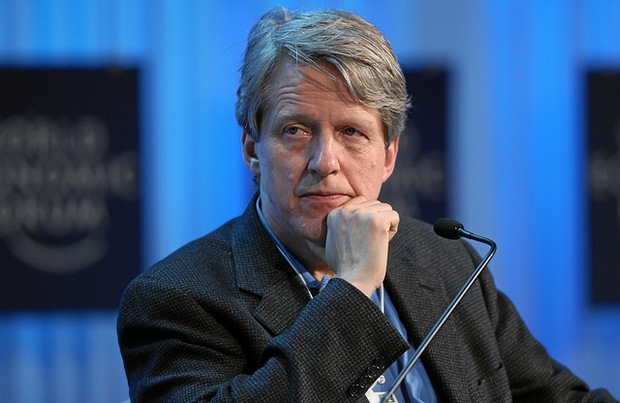 Robert Shiller, one of the Nobel laureates in economics announced Monday, has spoken to Paul Solman about the line of research that won him the prize. Photo courtesy of World Economic Forum Flickr account via Creative Commons.

Paul Solman: Old friend Robert Shiller of Yale was one of the three winners of the Nobel Prize in Economics Monday for his work on the short-term irrationality of markets. We’ve interviewed Bob many times about this — many times. Our favorite piece on the subject is one in which Bob, among other novelties, races a go-kart against — while debating — his old grad school buddy and stock market alter ego thereafter, Jeremy Siegel, the so-called “Wizard of Wharton.”

Shiller, who had less than 10 percent of his investment portfolio invested in stocks at the time, in 2002, told us:

We also enjoyed traipsing around San Francisco not long after the Crash of ’08 that Bob warned of with him and a colleague he more nearly resembles intellectually, George Akerlof, an earlier Nobel laureate.

And here’s a story with Bob and his longtime collaborator on the economics of housing, Karl “Chip” Case.

The following interview was conducted in 1999, near the height of the dot.com boom, with the Dow at nearly 11,500. The paradigm of the time, as epitomized by a book we were considering a report on, “Dow 36,000,” was that stocks were no longer risky in the long run, and therefore shouldn’t return an investment “risk” premium when compared with bonds.

So if bonds paid 3 percent a year in interest, say, as U.S. bonds roughly do today, stocks should be selling at 33 times their profits, which would also be a return of 3 percent. Right now, according to Shiller’s estimates, stocks are selling at about 25 times earnings, so by the paradigm of the ’90s, they would be undervalued and bound to rise in price.

Here’s how Shiller made the counter-argument in 1999, an argument he has made ever since, and for which, in essence, he won the Nobel Prize.

Paul Solman: Tell us, who was Irving Fisher and what’s he famous for?

Bob Shiller: Well, he was an economist who spent his entire career at Yale from his undergraduate days, I believe. And, what is he famous for? It’s funny how people become famous for a short quote about the stock market. So, in 1929, when giving a talk, he made a remark that the stock market had reached a permanently high plateau, which the media picked up.

And what he thought, which he wrote in a book in 1929, was that the public had learned that the stock market was a much better investment than they realized, and that until the 1920s, the market had been perpetually underpriced.

But now, he said, people are much more sophisticated, and so the market has reached its current level and will stay at this level indefinitely. That was about a week before the crash [LAUGHS]. It was a terrible thing for him, lost his entire fortune.

Paul Solman: Isn’t that sort of the new paradigm argument?

Bob Shiller: Absolutely, absolutely. It has the same secret. In 1924, there were a couple of books written arguing that the market had always outperformed other investments, and that bonds are not really a safer investment if you take a an inflation risk.

And then we see this in Lou and Jeremy Siegel’s book, the same argument recycled. And it’s very much a theme now that people have learned, and there’s a big question in my mind whether that’s right again.

Paul Solman: We are or the market is in the process of learning?

Bob Shiller:James Glassman and Kevin Hassett, who wrote “Dow 36,000,” believe that the swerve in the market today reflects the public’s learning that the market has been underpriced. And they expect this learning to continue, and they think that the Dow will reach around 36,000 and they want to pin down the date that they suggest, 2005.

So they’re predicting a tripling of the market because of ongoing investor learning.

Paul Solman: And this, this sounds familiar to you?

Bob Shiller: Yes, in fact, it’s not only this time. There are many times in history that we’ll hear arguments that investors have gotten more sophisticated. It’s also in the 1960s. Also, there tends to be repeatedly in history a sense that the Federal Reserve has gotten much more sophisticated. … We tend to hold our Fed chairmen in high esteem and think that they finally got it this time. But the repetition that we see, a little bit, tells us something because the market hasn’t maintained stability over all these periods.

Paul Solman: Is there nothing to the argument that stocks really aren’t so risky in the long-run? Therefore, the risk premium is too high. People aren’t realizing that. Therefore, they’re giving it away, and therefore stocks could go up to 36,000, I don’t know, by next Tuesday if everybody sort of suddenly got it at the same moment?

Bob Shiller: These are all half-truths. I think the stocks are maybe less risky than people have traditionally thought, and maybe people have learned that a little bit. But learning is a very gradual and slow process. And, if you ask what has changed recently, I wouldn’t say that it’s learning.

One thing that’s really striking, if you just look back historically, the idea that stocks are the best investment, or that stocks have always outperformed, has been around, it’s a perennial argument. And so I don’t think that’s what’s different right now.

…I’ve asked this in questionnaires of investors and right now, if you ask them, they’ll say I think there’s a good chance of a correction.

But you’ve got to ask them further, and they’ll say, but of course it will come right back up. And so, they think you cannot lose in the market. That’s wrong. That’s not learning, that’s taking something, inferring something, which no reputable economist would claim they have shown.

Paul Solman: Well, but the whole argument for stocks in the longrun is that over 60, 80 years, you name the time frame, on average, stocks, get 10 percent, 7 percent a year.

Bob Shiller: The public doesn’t understand, perhaps, the fact that this evidence is not really solid evidence about what can happen in the future.

…There are stocks that almost underperformed bonds over a 20 year period… If you take 1929 to 1949, they’re really close. People think that’s impressive evidence that stocks can’t do worse.
But that’s talking since 1926. How many 20-year periods are there? It’s not much time to make that kind of statement. It’s kind of like reaching — if you go back and look at historical data, you can find that kind of regularity, even if it’s meaningless.

Paul Solman: Since 1926, that’s 70-some-odd years, I mean, what the hell do I have to worry about? I mean, you know, in my lifetime, it’s not likely to be any different.

Ben Bernanke as Easter Bunny: Why the Fed Can’t Prevent the Coming Crash

That’s the deal. And if the stock market does well, those risk-takers will be paid off. If it doesn’t, they are the ones that take the hit. Everybody else is paid first: the bonds-holders, the employers, the suppliers, that’s the deal. It’s inherently defined to be a risky deal.

Now, it turns out, that in the past few 20-year episodes, the stockholders have always won. Okay, but that’s not really impressive. You’ve got to come back to the fundamental thing that stockholders are residual claimants.

Paul Solman: But your point is that if the company goes bankrupt or is having trouble, the bondholders get paid first. The stockholders only get paid if there are profits. Is that the plan?

Bob Shiller: Absolutely… The fundamental problem with business is that it is fundamentally uncertain what the revenues will be because there’s a hundred different things that can go wrong.

It’s difficult to start a business and tell your employees with families you don’t know what they’re going to get. You can’t do a business like this, so you tell the employees, we are going to pay you a fixed salary, okay, and somebody else who can bear the risk will take the risk.

And those are the stockholders. And so, we tell people, that’s the understanding when you buy stocks. These employees, they have to get their money, but we want you to be the person as a stockholder to buy into this risky business and get only what’s left over after all those people are paid. And you have to understand that that’s inherently risky.

Paul Solman: What about the bondholders, though? They’re supposed to be safer?

Bob Shiller: Well, the bondholders are paid first. They could lose money, too, if a company really tanks. But you’re supposed to be safer. … Now there is the issue that historically, bond levels were being held by inflation. This is the point that’s being made by Jeremy Siegel and others, and people made the same point in the 1920s, that bondholders have actually suffered more risk that stockholders, and the reason is that there has been this burst of low inflation. If you look around the world, the biggest hits have been taken to bondholders, not stockholders, and the big hits have been to countries who’ve let the price level get out of control.

But I question the relevance of that now in the U.S. Although it is provincially over, inflation is very stable at the present time. However, we have index bonds that are inflation-guaranteed. So, we have alternatives that are really riskless.