On Dow’s Worst Day Since ’08, Running for Cover 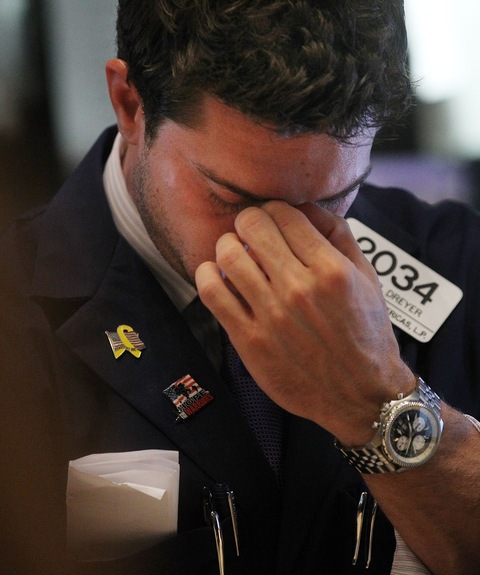 A trader bows his head on the floor of the New York Stock Exchange after the closing bell Thursday; photo by Mario Tama/Getty Images.

Just back from lunch, at which Brandeis classicists Ann Olga Koloski-Ostrow and Cheryl Walker schooled me in the economics of the ancient world, I received a call from the home office that schooled me on more recent developments: the stock market was plunging. Would I comment?

At lunch, Professor Walker referenced a letter from Pliny the Younger to his friend Calvissius in which he sold his wine crop to a group of businessmen. The price of wine seems to have plunged thereafter. “Their hopes were dashed,” Pliny observes. In a gesture of good will, he reports, he rebated an eighth of the price – and even more to those who had bid the highest.

“This amenability has cost me a great deal,” writes Pliny, “but it was worth it, for throughout the whole region the unprecedented rebate and process have won praise.” 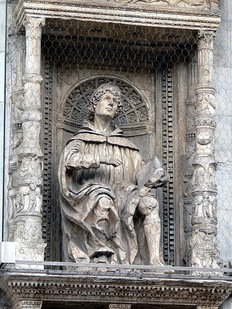 Medieval statue of Pliny the Younger on the facade of Cathedral of S. Maria Maggiore in Como, Italy. Wikimedia Commons photo by Wolfgang Sauber.

Ah, those were the days. I wouldn’t count on any such amenability in today’s anonymous, algorithm-driven markets, even if your retirement depends on it. What does reputation mean in such a world?

But on to explanation. Why the plunge of more than 500 points? For once, the same-day story seems pretty darn obvious. Markets are all about expectations of future returns, and today, those expectations became grimmer than a frowny face. The one with the V-shaped eyebrows. Look at the price of oil: down nearly 6 percent. What can that possibly mean, other than the expectation of a slowdown in global economic activity and thus in the demand for oil? Stocks down well over 3 percent in every market listed? The prospects for the world’s companies aren’t so hot either.

Next comes the political question: Is the bloodbath related to the debt deal? Be careful, now. Remember the fallacy of “post hoc ergo propter hoc.” Just because Thing Two follows Thing One, it doesn’t mean Thing One caused Thing Two.

That said, there are two competing claims. On one side are those who say the debt deal didn’t cut spending enough, and the markets are therefore punishing political cowardice. On the other side are those who say that, in a shaky national and global economy, the recent commitment to lower government spending in the largest economy on earth is just asking for a world of hurt. And they point to today’s bungee jump in the 10-year interest rate — down to 2.42 percent, nearing its lowest points since 1888 — as evidence that bond investors have not been made more nervous about lending the profligate U.S. more money after the debt deal, but less.

I myself must remain professionally agnostic. So ask yourself: Which side are you on?

I did hear a third analysis today, from a very intelligent associate. It speaks to the level of paranoia in the land, from right and left alike.

“Maybe they just want to wreck the economy so that Obama couldn’t possibly get re-elected.”

I didn’t have time to explain that while “they” may have an effect on American policy these days disproportionate to their numbers, “they” do not control global markets. We all do, collectively. And on the margin, so far this week at least, we are running for cover, because we just don’t want to invest our money in what may become a double-dip economy.