In Canada, find a penny, recycle it

Across Canada a beloved and familiar face is silently disappearing. Everyday transactions in shopping centers and banks are slowly feeding a systematized extinction unnoticed by most. The object of destruction: the Canadian penny.

The beloved coin, adorned with Queen Elizabeth and the iconic Canadian maple leaf, is being eased out of circulation. Starting in early 2013, the Royal Canadian Mint, with the help of financial institutions and charities, began collecting billions of pennies in preparation to recycle them. The complex process has no end date and is expected to take many years.

So far everything is going according to plan — the Economic Action Plan of 2012 — that determined that the cost to produce and distribute each penny was 1.6 cents. The Department of Finance killed the coin in the 2012 Budget because they had lost their value, minting the last penny in Winnipeg on May 4, 2012.

The mint has redeemed 4 billion pennies since they stopped distributing them in 2013. That’s enough pennies to wrap around the circumference of the earth and then some. While that seems significant, this number is nothing compared to the estimated 31 billion pennies that are still in circulation.

“There have been no challenges,” says Alex Reeves, the Senior Manager of Communications for the Royal Canadian Mint. “It has been very easy to leverage the system. Banks and armored car companies are the main channels for distributing coins around our country. It is merely a matter of putting things in reverse.”

So where are the pennies? The mint has been hoarding truckloads of them and American Iron and Metal Co. Inc, based in Montreal, has been awarded the contract to recycle them. When reached for comment, CEO Herbert Black said that he is not at liberty to disclose any details about the deal, which are still being ironed out.

But with boyish glee he remarked, “It’s very exciting. This is the history of Canada.”

Armored cars will transport the pennies to facilities where they will be sorted. Magnets and water tables composed of different chemicals will separate the pennies based on their different metal contents. Because pennies have different densities — those minted before 1997 are between 95 percent and 98 percent copper and in the late 1990’s the mint experimented with zinc pennies and then switched to steel because it was more cost effective — steel pennies will be drawn to magnets whereas the zinc and copper pennies will float. Since 2000 the penny has been 94 percent steel, 1.5 percent nickel and 4.5 percent copper plating

The Finance Department of Canada estimates that melting down the metal from the pennies and reselling it in the industrial sector will bring in $42.5 million in revenue. (The U.S. dollar is worth $1.10 in Canadian dollars.) There are a large number of uses for zinc, steel and especially copper in today’s global economy. Copper, being highly conductive and malleable, is used most commonly in building construction and electronic products. It’s one of the most highly coveted metals in the world. 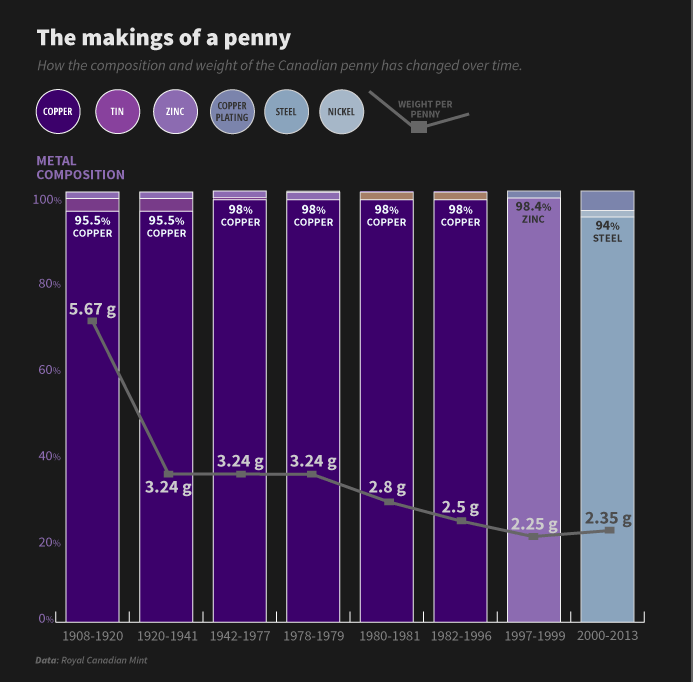 So are Canadians getting a fair deal for turning in their coins?

Eric Paquet, the Vice President of the Canadian Numismatic Company studies currency and the collection of coins. He explains that while the metal content of most pennies is worth more in the industrial sector than its face value, the sheer quantities needed to make a profit from smelting the coins is unrealistic.

“It would take thousands of coins, truck loads, to be worth melting down,” he said. “At the end of the day, yes it is probably better to not give [the pennies] back to the government, but there are very few people who have the space or the ability to store them in bulk. Bringing them to a bank or a coin dealer is much easier.”

But even if a consumer had the space to store them, the Canadian Currency Act prohibits any person from melting or breaking up any coin that is legal tender.

Faced with these options, some Canadians have decided to trade the coins at auctions. According to Paquet the numismatic market has seen an influx in business from the discontinuation of the penny.

“There definitely has been a peak in interest, of people calling on a regular basis to find out about the market. Asking will [their penny] be worth more money if they buy the last year 2012, or if they wait to sell the collection they already have. There has been a lot more interest. And you know probably, yes, an increase in sales.”

He’s not kidding. The Mint sold the last million pennies made in rolls of 50 for $9.95 per roll. Many of these commemorative rolls have been put up for private auction, with some dealers spending as much $2000 for them on eBay.

The end of the Canadian penny has once again resurfaced debate around whether or not the U.S. could pass a similar deal. Former Arizona Representative Jim Kolbe introduced legislation that would kill the penny three times, in 1990, 2001, and 2006, each time to no success. The main lobby group for the zinc industry has a vested interest in keeping the penny alive since it supplies the government with the penny blanks used to make the little Lincolns. Since the savings from the elimination of the penny would have a nominal effect on the overall budget, it remains an uphill battle for those in favor.

Nevertheless there are those who still love the penny regardless of its economic value.

Allen Klein, an American professional speaker and enthusiastic penny collector, believes the little pieces hold an intangible value. Klein, who lives in San Francisco, makes a hobby of collecting unwanted pennies on the street. Since his wife passed away, he feels that finding a penny is like collecting a little sign from her. He estimates that he collects around $30 worth of pennies each year and donates them to a local charity called Every Penny Counts, which supports HIV/AIDS patients.

“I’d hate to see them go,” he said. “Does it pay to make them? Probably not. But does it bring me joy? Yes! Just because they’ve lost their value doesn’t mean they can’t be worth something on another level.”

Editor’s note: Due to an editing error, this article has been updated to reflect the correct exchange rate between the U.S. dollar and the Canadian dollar. Originally the rates had been inverted.