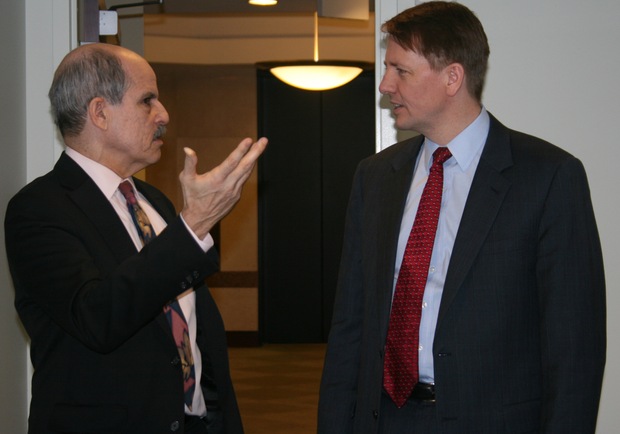 In the spring of 1987, a law clerk from Ohio, having taken a friend’s advice, made it onto the TV trivia show, “Jeopardy!” A quarter-century later, that man is among the most controversial political appointments in recent history. Or, as host Alex Trebek might pose it on the program today, “In the late ’80s, this current financial regulator won $45,000 on ‘Jeopardy!’ and made it through the first round of our Tournament of Champions.”

The answer, in proper Jeopardese: Who is President Obama’s recess appointment as head of the Consumer Finance Protection Bureau, Richard Cordray?

For an upcoming story, I interviewed Cordray Wednesday in Washington. D.C. Famously tough on crime, Cordray was attorney general until the Republican clean sweep of the Ohio Statehouse in 2010. In our conversation he was courteous, diplomatic, to-the-point and unswerving in his conviction that his appointment is legal, despite what Republican senators claim and that his work won’t be affected by legal or congressional challenges.

“The CFPB had already rolled out a public education campaign, ‘Know Before You Owe,’ to improve financial literacy on the consumer side as well before Cordray officially took office,” wrote The Washington Post’s Suzy Khimm. But within days of his appointment, “the CFPB also launched its first known investigation into a financial firm, probing kickbacks that were allegedly paid to PHH Corp., a private mortgage lender.”

For more detail, stay tuned to the NewsHour. With luck, we’ll get the piece finished and on the air soon.

Meanwhile, Cordray’s CFPB urges consumers like you to tell it what the current problems are at consumerfinance.gov.

Finally, here’s my favorite news clip on Cordray: Kevin Roose of The New York Times chronicled his Jeopardy appearance so many years ago, preserved as it happens on tape.

In the archived video, Mr. Cordray, clean-cut and dressed in a dark suit and blue tie, is seen nearly acing the Double Jeopardy round. He answered all five questions in the ‘Olympics’ category correctly, winning $3,000 and displaying broad knowledge of sports history. He correctly responded, ‘What is physical education?’ to the prompt, ‘As late as the 1930s, teachers of this subject were considered pros and ineligible for the Olympics,’ and rightly identified Harold Abrahams as the 1924 gold medalist who was immortalized in the film ‘Chariots of Fire.’

In a moment of fiscal irresponsibility, Mr. Cordray wagered all $1,000 of his winnings on that round’s Daily Double: “Ecclesiastes says ‘A man hath no better thing under the sun than to’ do these 3 ‘hedonistic’ things.” He paused slightly before responding, correctly, ‘What are ‘eat, drink, and be merry?’

‘Though the most beautiful Roman goddess, she married the ugliest god, Vulcan.’ Who is Venus?

‘While in office, he became first president to ride in a car and submerge in a submarine.’ Who is Theodore Roosevelt?

‘Ancient philosophers reportedly called the senses the ‘windows of’ this.’ What is the soul?

As to the questions Cordray muffed during the Reagan years, we popped one on him this morning: “Two TV shows (from 1986) that had the name ‘Hammer’ in their titles.” You’ll have to wait for Cordray’s appearance on the NewsHour to see if he finally redeemed himself. Meanwhile, here’s a video of his original Jeopardy! appearance, via rutube.