Rising health costs and economic inequality may threaten your retirement

Using the adjective “rising” before the phrase “health prices” seems redundant these days. Health prices seem to be always rising, often at rates greater than those for other things we buy. The continuation of this trend usually offers little to look at that we haven’t seen before.

Still, “Ask Phil” specializes in tilting at windmills and other quixotic exercises, and I will keep reminding you of these and other most unpleasant health care trends. As consumers, you need to know them to adequately plan for your future. As citizens and voters, you need to know them to understand what’s at stake for your community and to cast your election ballots accordingly.

I often look to the Kaiser Family Foundation for my health information. In an era when charges of fake news get blown about like so much ideological cotton candy, Kaiser stands out as a provider of rigorously fact-based information. Kaiser recently took a broad-based look at how much money people on Medicare spend for their health care and, to the point here, what the future is likely to bring, assuming our current health programs continue in much their present form. I wish everyone would take the time to read this entire 24-page report. Heck, if you’re retired, maybe you can make the time!

The significance of what Kaiser found is how our widening economic inequality is creating divergent impacts of health inflation.

Kaiser looked at total out-of-pocket spending on all types of health needs and then lined this total up against equally broad measures of senior incomes. This can be a tricky exercise and, of course, averages do not equate to an individual’s circumstances.

The big picture here is that health care will be increasingly expensive for all of us. As I noted earlier, this is hardly a surprise. The significance of what Kaiser found is how our widening economic inequality is creating divergent impacts of health inflation.

More affluent retirees will hardly break a sweat in affording health care. Yes, there will be complaints, but their financial burden will not increase substantially.

“Between 2013 and 2030,” Kaiser said, “the median out-of-pocket health care spending burden for beneficiaries in traditional Medicare is projected to increase modestly from 14 percent to 17 percent” of per-capita income.

Keep in mind here that median is a mid-point, not an arithmetic average; half of everyone will have a lower burden and half a higher one. Also, traditional Medicare refers to the two-thirds of Medicare beneficiaries who do not have a Medicare Advantage plan but instead have Parts A and B, usually a Part D drug plan, and also perhaps a Medigap supplemental insurance plan.

Paying a sixth of our incomes for health care is unacceptable. But for people of relative means, a 3 percentage-point boost in health spending by 2030 is more of an inconvenience than a serious problem. According to Fidelity Investments, which takes regular looks at retirement readiness, 86 percent of baby boomers (now aged 53 to 71) are in good financial shape for retirement. This means they can pay for their essential expenses but are not fully funded for their discretionary travel and leisure spending wishes.

Average health spending is projected to rise from 41 percent of average Social Security income in 2013 to 50 percent by 2030.

People in or near poverty already receive substantial help in paying for Medicare, and if such support continues (a big “if” under Republican “reform” proposals), their outlook also would change little. That outlook, of course, is hardly rosy.

Average health spending is projected to rise from 41 percent of average Social Security income in 2013 to 50 percent by 2030. In its measurements, health spending includes about 60 percent for Medicare and 40 percent for other health needs. This average masks much more serious burdens for poorer, older, and sicker retirees. 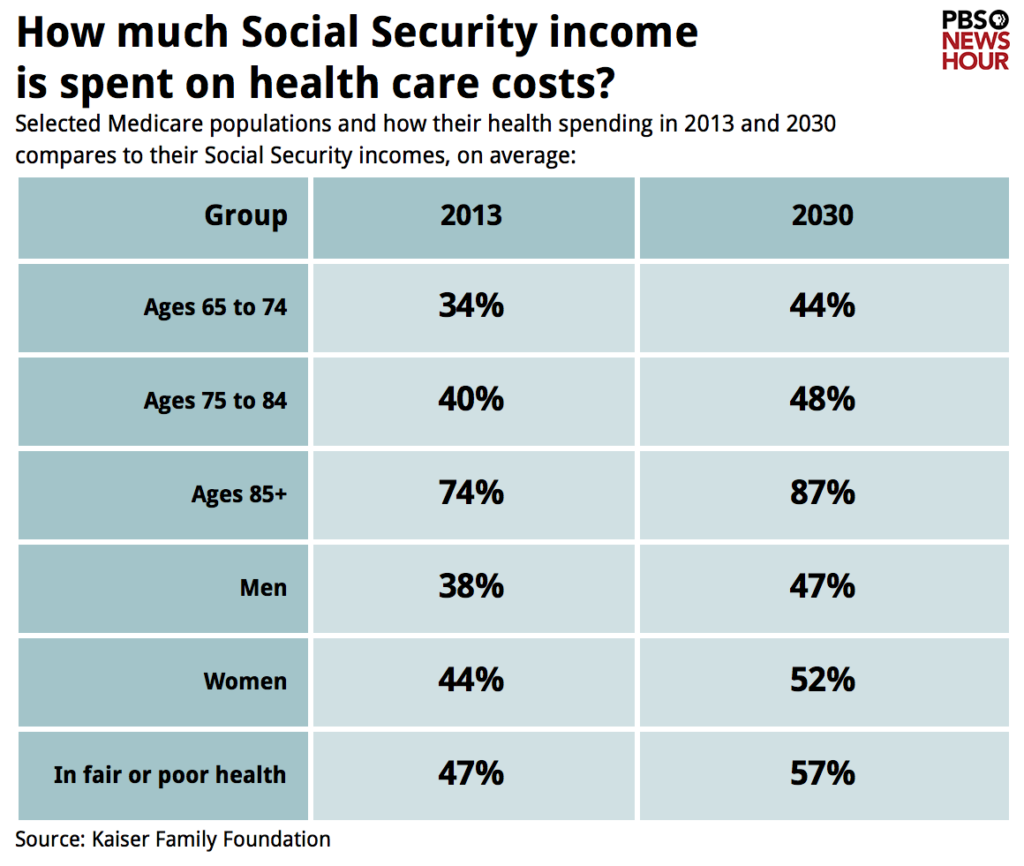 Here are some other 2013 to 2030 key comparisons, by income group. Here, the broader measure of total income is used, not just Social Security. These use median changes, which, to repeat, aren’t the same as arithmetic averages: 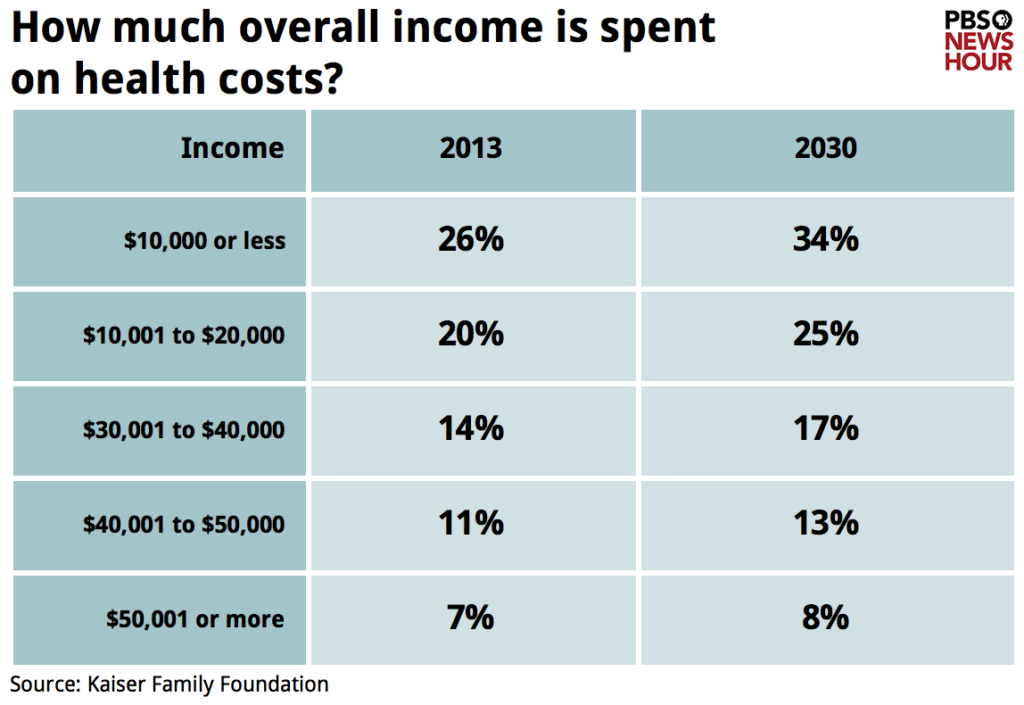 Dependence on Social Security is increasingly shaky given planned changes in benefits, as well as projections the program will run short of funds beginning in 2034, at which point it will be able to pay only an estimated 77 percent of projected benefits.

In addition, senior advocacy groups say that Social Security benefits are declining in terms of what those dollars will buy. They argue that the program’s annual cost of living adjustment (COLA) is based on overall consumer prices that do not fully protect older consumers from the impact of inflation on the items older consumers need, particularly health care.

For retirees, the Kaiser trend lines foreshadow unpleasant choices — cutting back on non-health spending, reducing health care use, or both.

People who are still working also might consider cutting current consumption and setting aside more savings for future health needs. This includes maxing out contributions to health savings accounts, where possible.

Looking at the nasty convergence of these trend lines, it is more important than ever for people to make smart Social Security and Medicare decisions.

There has been a generation-long uptick in later retirements, and the Great Recession of 2007 and 2008 accelerated the ratio of older employees in the workforce. A recent study by the Urban Institute finds a growing economic gap between seniors who are healthy enough to continue working, and those who cannot.

“Although employment and income at ages 62 to 64 increased substantially over the past two decades for people in good health, employment and income stagnated for those with health problems, and throughout retirement their average incomes remained below the average of those in better health,” the study concluded. “These findings highlight the importance of strengthening the disability safety net and underscore the risks of raising Social Security’s retirement ages.”

Looking at the nasty convergence of these trend lines, it is more important than ever for people to make smart Social Security and Medicare decisions. As always, I will personally answer as many of your questions as I can.